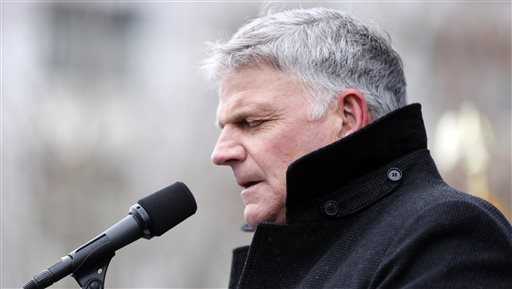 Recently, Franklin Graham announced that he was going on a 50-state tour to call on evangelicals to go to the polls and vote for “godly leaders.”

And while he promised not to endorse any candidates and expressed dismay with the Republican Party (“I’m as disappointed in them as I am the Democrats,” Graham remarked), it is clear that there is a partisan approach to any religious rally among conservative Christians to the cause of politics.

Along with various “gaps” (especially among gender and race) in political allegiance, the modern “God Gap” has been one that has developed since the 1980s, when Ronald Reagan made a very open play for Christian conservatives, particularly Southern evangelicals, and openly courted such religious leaders as Jerry Falwell and Pat Robertson and voters who were frequent attendees to church and identified themselves as born-again or evangelicals.

Before Reagan’s re-election bid, Democrats claimed a majority of party identification of those who attended church “more than once a week” or “at least once a week” in the general election surveys conducted by the American National Election Studies (ANES).

From 1984 to 2004, those ANES respondents who frequently attended church (at least once a week) shifted their partisan affiliation to an even balance between the Democratic and Republican parties. In 2012, however, a majority of frequent church attendees identified themselves as Republican (52 percent), with only 37 percent as Democratic, according to that year’s ANES Survey.

More importantly, GOP presidential candidates have been able to claim a strong allegiance from frequent church attendees: 58 percent voted for McCain in 2008 and for Romney in 2012, with only 40 percent voting for Obama in both elections.

But even with this support for Republicans from those who frequent the pews, Obama did even better among those who said they only attended church a few times a year or never: 62 percent in 2008 and 58 percent in 2012 voted for the Democratic presidential candidate.

This support by evangelical voters has not gone unnoticed by the GOP and certainly not by its presidential contenders. Evangelicals are key voters in two critical early states of the primary battle: Iowa, where they were 57 percent of the 2012 caucus attendees, and South Carolina, where nearly two-thirds of primary voters identified themselves as “born-again or evangelical Christians,” according to exit polls in 2012’s primary contest.

So it should come as no surprise that Graham’s first rally would be held in Iowa, just three weeks before the crucial caucuses and the opening of voting for the GOP presidential contest.

But with the rise of the “religious nones” in American society, and especially the drop of Millennials who identify as a “Protestant evangelical,” Graham’s rally may be more of an altar call to the flock to stem the tide of declining influence. Most likely, Republican front-runners, especially Donald Trump and Ted Cruz, will actively court the evangelical vote, so their influence is far from declining within the GOP.

The question is, come the fall, will there be a revival to call the voters’ souls to the polls?

Michael Bitzer is a political science professor at Catawba College. This column first appeared on his political blog for WFAE radio.

Editorial: Jonas, we were ready for you

It would be easy to  watch television and read newspaper reports about an approaching winter storm — especially the season’s... read more