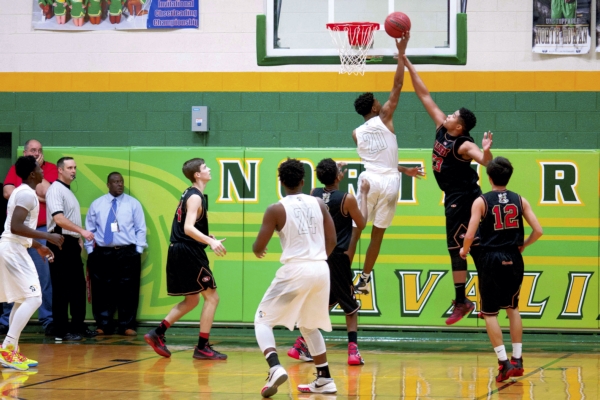 SPENCER — The long-standing rivalry between North Rowan and Salisbury on the basketball court generates enough drama on its own. When both teams are ranked in the top 10 in the state 2A poll and are virtually tied for the Central Carolinas Conference lead, the intensity level just goes higher.

Thursday night at a packed North Rowan gym, however, the Cavaliers took control early and never let off the gas pedal in cruising to a 69-47 win over the Hornets. Led by guards Jalen Sanders and Joe Scott, plus big man Josh Handy, North (15-2, 5-0 CCC) put on a clinic in high speed transition basketball that gave them the upper hand in the conference race. Salisbury (14-3, 3-1 CCC) was unable to keep pace against a Cavalier fast-break attack as they lost for the 10th consecutive time to their biggest rivals.

“It is just Salisbury,” said North’s 6-5 post man Handy, who was especially animated in the early going when the Cavs built an early lead. “In every Salisbury game against North Rowan, you have just got to come with the most intensity that you have ever had. And that is what we did tonight.”

Handy scored two quick layups to open the game as North built a 12-2 lead. Sanders then took over the ball hawking defense and fast-break offense to build the margin to 41-27 by halftime. It never got closer than that in the second half as Sanders, Scott and Henderson Lentz built the margin to 20 points and held it there the rest of the way.

“Our defense was key tonight,” Sanders said. ” Our main focus was to not get a shootout game with them because they are a big team. We just had to go hard after them.”

Sanders led the winners with 19 points, seven rebounds and three assists while Handy and Scott each added 14 points. All of Handy’s points came in the first half, capped by a breakaway dunk just before halftime that sent the home crowd into a frenzy.

North’s pressure defense  was most effective in limiting Hornet guard Deshawn Troutman to just two points while DJ Alexander managed eight points and eight rebounds. Wes Fazia, Salisbury’s 6-7 center, was the most effective inside with 16 points, 10 rebounds, two blocks and a couple of assists.

Salisbury missed numerous shots inside and up close, which then lead to a breakaway basket the other way for North.

“Their transition hurt us,” Hornet coach Bryan Withers said. “Actually, part of our game plan was to get two guards quickly back on defense but we are so undisciplined when it comes to big games like this. Everybody just wants to do their own thing.”

The intensity of the game and the rivalry did surface a few times in the contest with s0me hard fouls and numerous scrambles on the floor for a loose ball.

Early in the fourth quarter, North’s Sanders and Salisbury Fazia tangled on the floor going after a rebound and ended up with a double technical foul.

North then responded with a three point play by Alonzo Sirleaf to push the score to 63-40 that assured a wide winning margin.

“Defense was our main focus tonight”, winning coach Andrew Mitchell said, “and our defensive intensity was very good tonight. We were able to get our transition game going really well and that is the way we like it.”

The game was moved up to Thursday in anticipation of Friday’s major winter storm. Salisbury will be right back in action Monday with a CCC make-up game at Thomasville. North Rowan is off until next Friday when they play a key league game at Lexington.