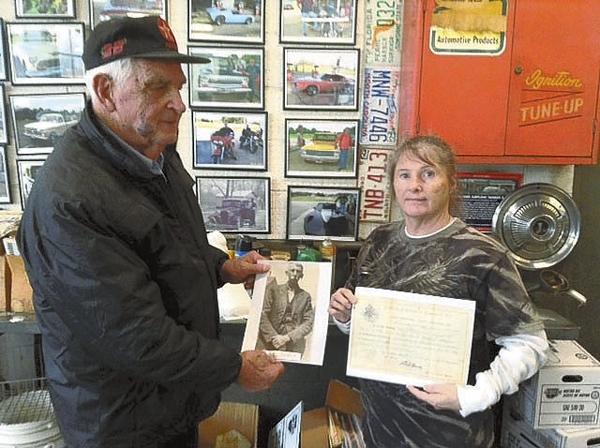 Bob Mault holds a picture of Peter Safrit while Dorothy Safrit Poole holds the Certificate of Release for Safrit following the end of the Civil War. David Freeze/For the Salisbury Post The Certificate of Release of Prisoner of War for Rowan County Civil War veteran Peter Safrit. Safrit signed the release two months after the end of the war. David Freeze/For the Salisbury Post

Dorothy Safriet Poole buys her gas at Mault Brothers Service Station near the intersection of highways 152 and 153. She had seen many military uniforms hanging in the service station and knew that owner Bobby Mault had been collecting items for many years. Those uniforms and lots of other military artifacts were headed to Mault’s Price of Freedom Museum. Poole wondered if the museum might have a place for Civil War history, too.

After finally opening an old chest owned by her dad, Poole found the original Certificate of Release of Prisoner of War and Oath of Parole documents for her ancestor, Peter Anderson Safrit. Poole said, “We always kept the chest closed while my dad was alive, but about 15 years ago, I opened it.”

Not previously an enthusiast for Civil War history, Poole quickly became interested in the service record of Safrit that had been compiled by her cousin, Mike Safrit. She said, “He was lucky to have lived through the war with all the things that happened to him.”

Peter Safrit served in Rowan County’s Company B, 4th NC regiment. Born in 1840, Safrit was 22 years of age when he enlisted in the Confederate Army on March 13, 1862. His unit was made up entirely of Rowan County volunteers.

Just two months into his service, Safrit was hospitalized with typhoid fever in Richmond, Virginia. Historians report that more Confederate soldiers died of disease than of bullets, so Safrit was lucky to have recovered.

In the late summer of 1862, General Robert E. Lee, Commander of the Army of Northern Virginia, decided to invade the northern states in hope of major victories that would allow for diplomatic recognition of the Confederacy by European nations, particularly Great Britain and France. The army was poorly equipped, with many soldiers lacking shoes and short of food. Company B was a part of the Army of Northern Virginia, requiring infantryman Safrit to march all the way to Maryland.

Lee’s army was outnumbered more than two to one when he met the Union Army of the Potomac on the field of battle at Antietam Creek. Making matters worse was the fact that Union General George McClellan had a copy of Lee’s orders, found wrapping three cigars. The result was the single bloodiest day of the entire war on Sept. 17, 1862.

Safrit didn’t make it to Antietam (Sharpsburg, as the battle was referred to in the South). Lee had divided his army several days prior to Antietam in an effort to secure three mountain passes near Boonsboro, Maryland. Safrit was wounded in the arm at Turner’s Gap, part of the Battle of South Mountain. With his arm also broken, Safrit was left on the field on Sept. 14 and eventually captured by Union soldiers on Sept. 28.

Just three days after his wounding, Safrit’s unit helped anchor the famous “Sunken Road,” which later became known as the “Bloody Lane.” The 4th NC, another North Carolina regiment and two Alabama regiments inflicted terrible casualties on the Yanks before being overwhelmed by superior numbers, having to retreat while leaving the bodies of a large number of comrades behind. Had Safrit not been wounded a few days before, he again would have been lucky to survive. More than 22,000 casualties were shared by both sides on the day of battle.

As a wounded prisoner of war, Safrit was confined to Fort McHenry in Baltimore until exchanged back to the Confederates at Fort Monroe, Virginia, on Oct. 11, 1862. Early in the Civil War, soldiers from both sides were exchanged for one another and allowed to return to the fighting. Just six days later and back with the Company B, Safrit was admitted to the hospital in Richmond for treatment of an arm wound. He was also paid $60.86 for five months and sixteen days of service.

Safrit was sent to General Hospital #4 in Wilmington on March 2, 1863, for further treatment of the arm wound. Records show that on April 13, 1864, he appeared before the Medical Examining Board of the hospital and “was examined and found able to perform field service” again. After a 20-day furlough to visit his family in Rowan, Safrit was again back with Company B.

The fall of 1864 found Safrit under the command of General Jubal Early during the Shenandoah Valley campaign. He took part in the battle of Cedar Creek on Oct. 19 and was wounded again in the left leg by a rifle ball. Safrit was captured again by the Yanks on the same day. His wound was described as a flesh wound that injured the fibula. On Oct. 24, Safrit was admitted to the U.S. General Hospital in Baltimore, Maryland. On March 31, 1865, he was sent to prisoner of war camp on Point Lookout, Maryland.

Safrit’s name appeared as the signature on the Oath of Allegiance to the Union on June 20, 1865, approximately two months after the war ended. He was released to return home the same day. The same document described Peter Safrit as being of fair complexion, with blue eyes and brown hair, and being 5 feet, 8½ inches tall.

After returning from the war, Safrit farmed with his father and surviving brothers, married at least once, raised three children and lived to the age of 82.

Mault already has a Civil War battle jacket at the Price of Freedom Museum, which honors American soldiers from all wars. He will add the records of Peter Safrit and would love to have more. Mault said, “I’m 82 now and feel like the Good Lord put me here to bring this history forward. It all started with just one uniform here at the station.”

Not sure what to do with Safrit’s paperwork, Poole said, “I just felt like Bob should get it for the museum. It’s in the right place.”

Call Mault at 704-857-7474 about any donations or questions concerning the Price of Freedom Museum, which is located at 2420 Weaver Road, China Grove. For more information, visit the museum’s website at www.priceoffreedom.us .

By Susan Shinn For the Salisbury Post LEXINGTON — About 16 years ago, Lee Hinkle had a dilemma. He and... read more