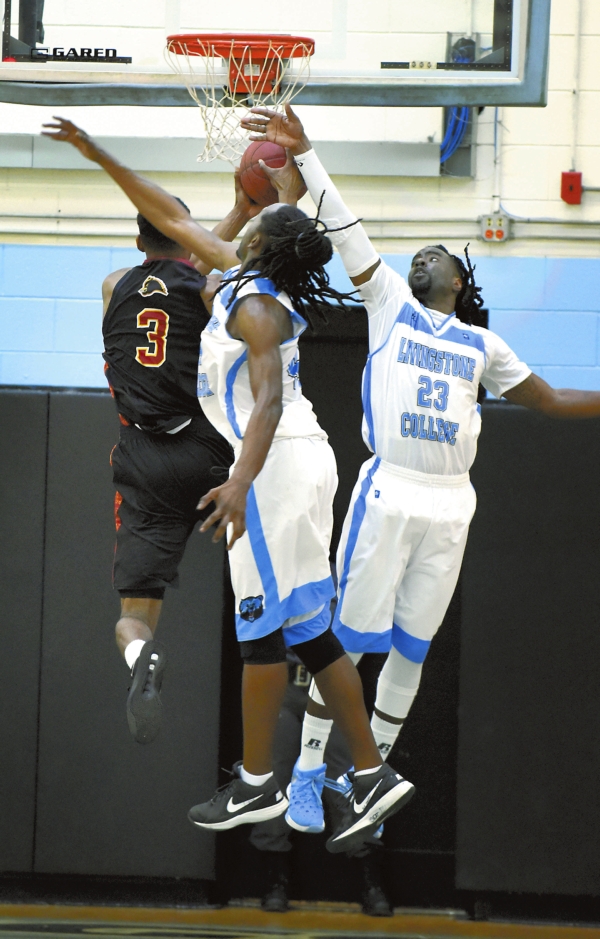 Livingstone shook off a two-week slide and used an energetic finishing kick to set aside visiting Shaw, 79-67, Saturday at New Trent Gym.

“We had to humble ourselves,” senior Ty Newman said after the Blue Bears (8-10, 3-3) snapped a four-game losing streak. “Every game should be like this. When we play for 40 minutes this is what happens.”

Winning coach James Stinson looked and felt relieved in his office after Livingstone won for the first time since Jan. 5 and improved to 3-0 at home.

“Since we’ve won it a couple of times everyone looks to beat us,” he said. “We just have to persevere and just play Livingstone College basketball. Our problem has been that we haven’t been able to close out games. Against Shaw, which is one of the elite teams in our league, we did.”

Shaw (7-11, 4-2) shot 53.8 percent from the floor in the first half, but was no match for LC in the closing moments. The Blue Bears allowed only one field goal in the final 5:50 — and that was a too-late-to-matter put-back with 19 seconds to play.

“Livingstone’s a championship team,” said Shaw coach Joel Hopkins. “When you play them you’ve got to do the little things — and we didn’t. I look at this more as what we didn’t do. We didn’t rebound in the second half. We didn’t push the ball. We didn’t execute with the basketball. We didn’t do it in a game that counts and we came up short.”

Newman brought the beef for Livingstone, contributing 19 points and 15 rebounds, seven of them offensive. Teammate Daryl Traynham had 14 points, six assists and four steals in 23 minutes off the bench.

“We buckled down, played with energy and played together,” Traynham said afterward. “When we do that, we’re one of the best teams in the CIAA.”

At times, it was more of a bumper-car race than a basketball game, and still close midway through the second half. Livingstone opened it up and went ahead, 61-57, when Newman took an ally-oop feed from Eric Dubose and slammed with 6:18 to play. “The dunks get Ty going,” Traynham said. “He was a man at both ends today.”

Moments later, Dubose repeated the scene with 6-foot-8 Cordero Holt — who flushed down one of his signature, crowd-pleasing dunks like he was handing out business cards — providing a 68-63 Livingstone lead with 2:38 remaining.

“We’ve got so many weapons on this team,” Newman said. “They were watching me and Daryl fill the lane. But Eric, he’s such a great facilitator. He saw that play before it even happened.”

Traynham, a 5-10 senior guard, converted seven of eight free throws in the last 2:07 as LC salted the game away. Dubose finished with 11 points on 4-for-7 shooting. Shaw was led by junior guard Larry Richardson II, who shot 7-for-13 from the field, buried four 3-pointers and topped all scorers with 20 points, despite not scoring in the final 14 minutes. The guests made only eight baskets in the second half.

“We rely on our ability to come back,” Stinson said. “You know, get into close games and play late into the game. But this was a game where we were forced to execute — to take care of the ball, get good looks, get a few stops. We did that tonight and that’s the way you want to grow.”