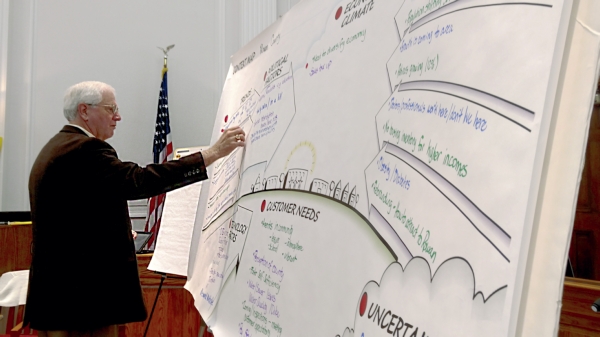 Rowan County could have a little extra spending money in the 2017 fiscal year.

County Commissioners are unanimously optimistic about economic growth in Rowan. In a presentation during Friday’s commissioner’s retreat meeting, County Manager Aaron Church provided statistic projects to go with optimism. Church outlined a potential scenario where Rowan receives more than $4 million in additional tax revenue during the 2017 fiscal year, which begins on July 1.

As a result of his projection, county government could pay for new roofs on several buildings; hire new paramedics; give a cost of living adjustment; pay increases to match the state averages; and replace the HVAC system in the Jail, Justice Center and Court buildings. At the end, Rowan would have $175,000 left over, according to Church’s scenario.

His projections would require commissioners to raise property taxes by a notable margin to achieve the same result, according to Commissioner Craig Pierce. Church’s scenario, however, would be a result of a growing economy in Rowan, not county-imposed tax increases. He used evidence from an economist at the University of North Carolina at Charlotte to precede his projection.

Pierce questioned whether it was too lofty. Specifically, he mentioned Rowan’s recent revaluation — a process occurring every four years that scrutinizes the value of property. In 2015, Rowan County’s revaluation resulted in a slightly decreased total property value.

“I just don’t see where you get that growth since we just revalued,” Pierce said. “I think the only real increase will be sales tax.”

Church’s projection, however, is based on a slowly growing tax base and improved sales tax numbers.

Tax records for the current year also show slowly growing property tax revenue for Rowan County government. Because of volatility, Church and Finance Director Leslie Heidrick are cautious to say whether sales tax revenue growth will continue, but the previous trend is undeniable. Data presented during Friday’s planning retreat meeting shows Rowan’s sales tax grew in fiscal year 2015 when compared to prior years. Only a few months are available for fiscal year 2016, but the county’s sales tax revenue is still growing slightly.

Heidrick compiled data into a series of graphs for Rowan commissioners. Two depicted sales tax. The first was a line graph showing monthly sales tax revenue as a percentage of the total raised. The second showed monthly sales tax raised over four years.

“When it is going down, it is going way down,” Church said. “It looks like we’d be able to predict (sales tax), but it can turn on a dime. It’s good while it’s here. When it turns, it turns before you know it.”

In the second graph, sales tax for each month appears as volatile as Church described. It spikes some months and dips in others. This year, however, is projected to be the seventh-straight year of sales tax revenue growth.

Even with the projected increase in sales, new taxes are coming. In 2015, the state legislature passed a bill adding taxes to repair, maintenance and installation services. The new taxes begin in March, and Church said he’s been told the tax would result in an additional $2 million for Rowan County government.

With the added revenue, commissioners will have to decide where and how much to spend.

Repairing county buildings will consume growing sales tax quickly. Commissioners tossed around the idea of placing excess money from the new tax on services in an economic development fund. Commissioner Mike Caskey wondered aloud whether it would be a good idea to split it equally among public schools, the community college and economic development projects. No firm decision was made on what to do with the additional sales tax money.

Friday’s discussion is technically the start of budget discussions for the 2017 fiscal year, which begins on July 1. Church said community groups, county offices and volunteer fire departments should have budget request forms by the end of January. By March, Church said he and Heidrick would start budget meetings.

Commissioners should have budget drafts by mid May.