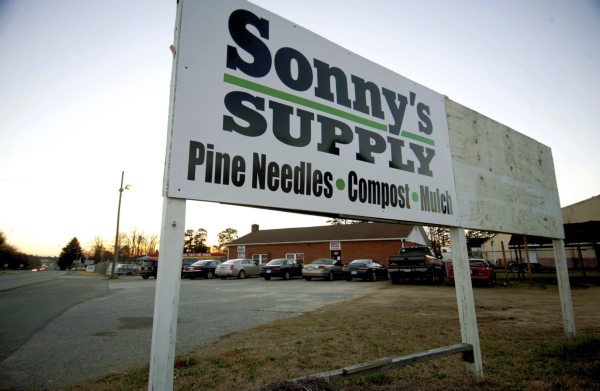 Sonny’s Supplies on North Cannon Boulevard has a week to get rid of 18 illegal video poker machines found there this week by an Alcohol Law Enforcement agent. Jon C. Lakey/Salisbury Post

LANDIS — Sonny’s Supplies on North Cannon Boulevard has a week to get rid of  18 illegal video poker machines found there this week by an Alcohol Law Enforcement agent.

Jerry Dean, the ALE agent assigned to Rowan, went to the business Tuesday in response to numerous complaints about gambling at the business, according to the ALE.

Dean found 18 of the machines, including 10 in one room, which is a felony, said Omar Qureshi, ALE’s agent in charge for this area.

“We didn’t take anything or charge anybody,” Qureshi said. ALE agents have been visiting establishments around the state, telling owners that the machines are illegal and giving them time to get in line with the law, he said.

The video poker machines had only been around for a couple of months, he said. As to their legal status,”Well, that’s who you talk to,” Faggart said.

Also on Tuesday, police arrested the last suspect in an armed robbery that took place at Sonny’s in November.

Demarshay Montez Witherspoon, 21, of Charlotte, is in the Rowan County Detention Center under $250,000 bond. Landis Police detectives worked with Charlotte-Mecklenburg Police, who arrested Witherspoon at his home.

Witherspoon faces three counts of armed robbery, one count of conspiracy to commit armed robbery, and possession of a weapon of mass destruction, a sawed-off shotgun.

Gambling establishments can have a lot of cash on hand and are prime targets for robbers, said Qureshi. Such businesses also attract drug dealers, prostitutes and others eager to take advantage of patrons who come in with cash.

North Carolina outlawed video poker and other electronic gambling in 2006, but operators adapted their games to try to skirt the law and fought in the courts to stay open.

A ruling from the N.C. Supreme Court last summer cleared the way for authorities to enforce the ban.

“We are actively engaging these businesses, first with a conversation and a warning,” Qureshi said. If they don’t comply, charges will follow.

ALE receives tips about sweepstakes cafes and video poker across the state. “It doesn’t take much for people to realize something’s going on,” he said.

Complaints typically come from family members of patrons and from employees afraid of getting caught up in a gambling charge, Qureshi said.

Once the machines are removed, the complaints stop, he said; in many cases, undercover ALE agents go to the businesses to verify.

“They’ll be gone Monday,” Faggart said of the machines.