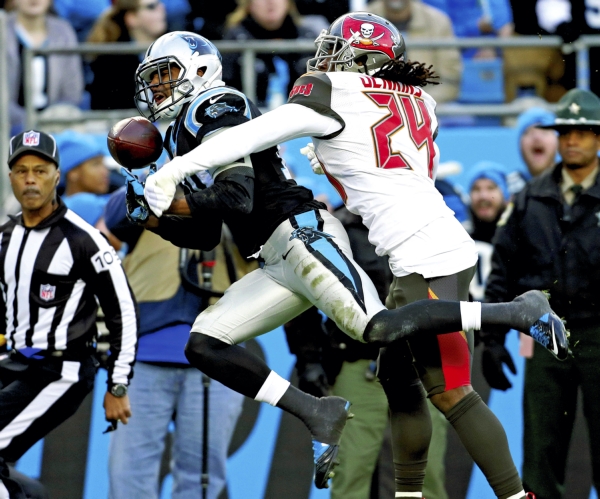 CHARLOTTE (AP) — Cam Newton had a wide smile after the game on Sunday, knowing that if any team hopes to prevent Carolina from reaching the Super Bowl, they’ll have to go through Charlotte.

“It’s extremely big,” Newton said of the Panthers securing home-field advantage in the NFC playoffs for the first time in franchise history.

Newton ran for two touchdowns and threw for two more, and the Panthers (15-1) avenged their only loss of the season by throttling the Tampa Bay Buccaneers 38-10 for their 11th straight win at home.

Newton tied Steve Young’s NFL record for most career TDs rushing by a quarterback with 43. Young took 15 seasons to reach that plateau; Newton did it in five.

But the three-time Pro Bowl quarterback was more interested in talking about the postseason than personal accomplishments.

“We find our edge playing in front of the home crowd,” Newton said. “Everything here feels just right. We don’t have travel to a hostile environment. This is our house — and it’s hostile.”

Panthers linebacker Thomas Davis, who had one of two interceptions against Jameis Winston, was quick to point out there is still work to be done.

“It’s very gratifying, but it means nothing if we can’t win in the playoffs,” Davis said. “It’s a great feeling to be 15-1, but at the same time, we know we can lose sight of what we’re trying to accomplish — that’s ultimately to win the Super Bowl.”

Said coach Ron Rivera: “We have to correct a lot of the mistakes and fix a lot of things.”

He wasn’t necessarily referring to Newton, who finished up his MVP-type regular season in impressive style.

Newton completed 21 of 26 passes for 293 yards as Carolina overcame a slow start to build a 31-3 lead in the third quarter. He finished the season with 35 touchdowns passing and 10 touchdowns rushing, becoming the first QB in history to accomplish that feat.

“Cam Newton was outstanding today,” Bucs coach Lovie Smith said. “You can see why he’s MVP of the league.”

He got plenty of help from his defense, which forced two turnovers and the special teams, which recovered a fumble to set up another score.

Rookie Devin Funchess had seven catches for 120 yards and a touchdown and Cameron Artis-Payne ran for 44 yards and a score.

“One of their guys this week said ‘They don’t have anybody other than Cam,’” Panthers tight end Greg Olsen said.

“Obviously, Cam’s a huge part of what we do, and we probably wouldn’t be where we are without him. But I think as you saw today, and we’ve shown over the whole season, we’ve got a lot of guys who can play. … We’re 15-1 for a reason.”

Despite their record, the Panthers have concerns entering the postseason.

Their pass rush has been stagnant in recent weeks and they suffered yet another injury at cornerback on Sunday when starter Charles Tillman went down with a knee injury. His status for the playoffs is uncertain, but Rivera said “there is some concern.”

The Panthers lost nickel back Bene Benwikere last month and the secondary has struggled some without him, particularly on third down.

But the Panthers had no trouble with the Buccaneers. Jameis Winston threw for 325 yards, but was intercepted twice as the Bucs (6-10).

After the game, Winston appeared upset with his teammates.

“There are coaches here who want it more than some of our players, and that’s the bad part,” Winston said.

The Bucs led 3-0 after the first quarter before Newton began to heat up.

The Pro Bowl quarterback put the Panthers up for good early in the second quarter by scoring on a quarterback bootleg around the right end.

After an 11-yard TD run by Artis-Payne, Newton connected on a 31-yard strike down the middle to an open Jerricho Cotchery just before halftime to make it 24-3. It marked the 31st time Newton had thrown and run for a touchdown in the game, tying him with Young for another NFL record.

The Panthers needed a win or an Arizona loss to seal home-field advantage throughout the playoffs.