“They have treated us like family”: Gold Hill church gives facility to new congregation 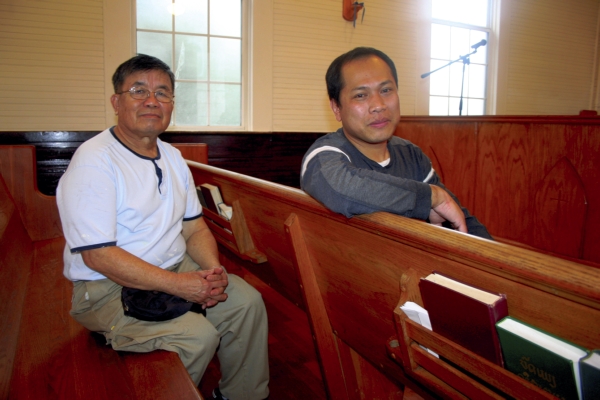 GOLD HILL — The sound of rakes scraping against gravel echoes across the church parking lot late Thursday afternoon. The day is cloudy and a bit dreary, but there’s an unmistakable sense of excitement in the air.

The women are members of Lao New Hope Church, a Laotian congregation, and its members are enthusiastically preparing for an open house. Today, the congregation takes over the use of the former First Baptist Church of Gold Hill, and they’ll open the doors from 2 to 5 p.m. Saturday to show off the 141-year-old wooden church, 320 Baptist Road, in Gold Hill.

The building has been unoccupied for eight years, according to the Rev. Toney Parsons, First Baptist’s pastor, after the congregation built a new facility nearby.

“We ran out of parking space,” says Parsons, First Baptist’s pastor for the past 17 years.

Parsons sells chickens on the side, and one of his customers, who is Laotian, told Parsons his own congregation was looking for a new home.

“They came to look at it and said, ‘We love it,’” Parsons says. So First Baptist is giving New Hope the use of the 100-foot by 50-foot building in exchange for paying utilities and maintaining the property.

In the two months since they struck the deal, the two congregations have been working together to reopen the structure. They’ve reinstalled pews, made repairs to the roof, painted and generally spruced things up.

“We just worked as a team,” Parsons says.

At 40, Niramit “Tiger” Keointhisone is one of the small congregation’s younger members. He acquired the nickname in his younger days, he says, and leaves it at that. He and his wife, Thongbay, 30, have a son, Alexander, 5, whom the older folks adore.

These industrious people left Laos during the 1970s and ’80s, escaping Communist rule, and eventually settled in the Albemarle area. Of the families who attend the church, one comes from Charlotte, six from Albemarle, and five from Mount Gilead. Many in the Laotian community work at the sawmill or shoe factory in Mount Gilead.

The congregation previously worshipped in a 1,200-square foot church on Henderson Grove Church Road in Salisbury, so the additional space is wonderful, Keointhisone says. “They’re rejoicing with tears.”

Tears gather in his own eyes as he talks about the relationship between First Baptist and New Hope.

“Our American brothers and sisters are supporting us,” he says.

“We all just sort of clicked,” Parsons says.

“We all feel like we’ve known each other for a long time,” says New Hope’s pastor, the Rev. Bounyong Vongsa.

Vongsa left Laos in 1989, spending two years in a refugee camp in Thailand before arriving in California. He moved to Charlotte in 1997, and Kannapolis in 2001, later being asked to pastor the Salisbury congregation.

Although the Laotians were raised as Buddhists, New Hope is a Southern Baptist congregation. And its members take seriously the Great Commission, Jesus’ charge to go into the world and make disciples.

The Sunday schedule reveals members’ deep commitment to their faith:

When the weather is warm, members spend Saturdays visiting the more than 75 Laotian families in the Albemarle area.

The church has received 14.88 acres of land in Mount Gilead, in the midst of the Laotian community there, and will eventually build its own church. For now, members are so pleased about the opportunity in Gold Hill. Last night, they gathered from 9 p.m. to midnight for a three-hour service of commitment. Today, from 9 a.m. to 3 p.m., they’ll participate in a Biblical theology meeting.

And Saturday, they’ll open the doors to the community. Members and pastors from other Laotian Baptist churches are coming from as far away as New York, Ohio and Tennessee. Vongsa’s sister from Wisconsin is coming.

There will be lots of good food. Syadalack has made dozens of crispy Lotus candies, a crunchy fried confection made of eggs, flour, sugar and coconut milk. She’s also going to make eggrolls and fried rice. The members admit that traditional Laotian food is hot and spicy, but they’ll likely tone it down a bit for guests’ palates.

Vongsa is eager to continue the congregation’s focus on evangelism in a new place.

“I want to meet people and talk to people about Jesus,” he says. “After they know Jesus, they learn more about God and their life gets better. It’s different than their old life. We’re going to reach out more.”