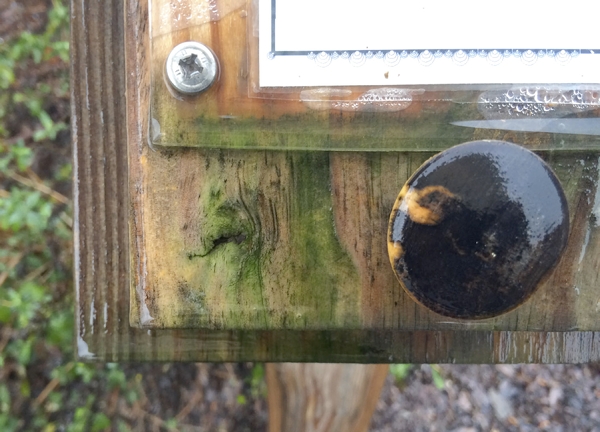 Cooperative Extension Algae grows on a wooden sign. With all the wet weather, algae is showing up on a variety of surfaces.

Have you noticed some extra green stuff growing on your trees, walls, stones, walkways, etc.? It’s probably one or all of these three things — algae, lichen or moss.

Algae is usually a slimy green film you will find on pavers, rocks and decks that are in shady areas that stay damp and cool. With the weather we’ve been having lately, I’m surprised my cats don’t have algae and moss growing on them.

My front steps are covered in algae right now, making them as slippery as ice. The good news is that it’s not too hard to clean algae. The bad news is that there’s no silver bullet to stop its growth on all surfaces.

Oxygen bleach is the preferred bleach to use on the exterior and interior of your home, because it will not harm you, your pets or your plants. Chlorine bleach, on the other hand, is highly toxic to plants, humans and animals. Allow the oxygen bleach to soak in and then scrub the surface. A pressure washer will also do the trick.

Lichen is a composite of a fungus and an organism capable of producing food by photosynthesis. Lichens are located on every continent on the planet, including both the Arctic and Antarctic. They survive in all climates and altitudes. Specific lichens have their specific requirements, but in general they need three things undisturbed, which are surfaces, time and clean air.

Lichens will make themselves at home on most any undisturbed surface, such as bark, wood, mosses, rock and soil. Lichen will also establish itself on glass, metal, plastic and cloth.

Lichens normally found on tree bark, for instance, are rarely found on rock and vice versa. Lichens do not cause plant damage. Lichens live symbiotically (in harmony) with trees and shrubs. It is not damaging bark in any direct way, nor does it parasitize living plant cells. Lichens do not appear to be associated with any pathogens of plant disease.

Often times we see a lot of lichen growth on trees and shrubs that are in decline for other reasons. The enhanced growth of lichens is due to the increased sunlight penetration due to a lack of foliage, allowing for more photosynthesis. The lichen did not cause the branch decline, but rather one of the effects of the plant decline was an increase in lichen growth.

Lichens established on stone in the landscape can give the garden a mature look. Lichen growing on your tree is not a bad thing. In fact, it should give you peace of mind knowing that the environment in your neighborhood is clean enough to support this amazing dual organism.

Mosses do not produce seeds or have a vascular system like most plants. Mosses produce spores as a method of reproduction and are part of the Bryophyte division. There are around 12,000 species of moss that can be found around the world. Most moss prefer shady areas of woodlands and forests that can provide water.

Moss can grow on trees, it can also be found on rocks, under water and on bare ground. Moss growing in the yard is often considered a problem by many homeowners. Remember, moss likes shady and moist environments, so if you increase the amount of sunlight in the yard, you should decrease your moss environment and hopefully improve your turf grass.

Soil fertility can also play a role in moss development and a soil test will help you determine what nutrients your soil might be lacking. In some areas that are predominantly cool, shady and moist, moss is preferred over turf grass for a lawn.

If you have moss growing in areas you don’t want it, you can remove it by chemical means with herbicides, but this is just a short term effect. If the chemical is not paired with the proper environmental and physical controls, i.e. more sunlight, improved drainage, the result will be bare dirt or mud. Goodness knows, we don’t need any more mud right now.

For more information about algae, lichen or moss contact the Rowan County Extension Center at 704-216-8970 or on the web at rowan.ces.ncsu.edu.