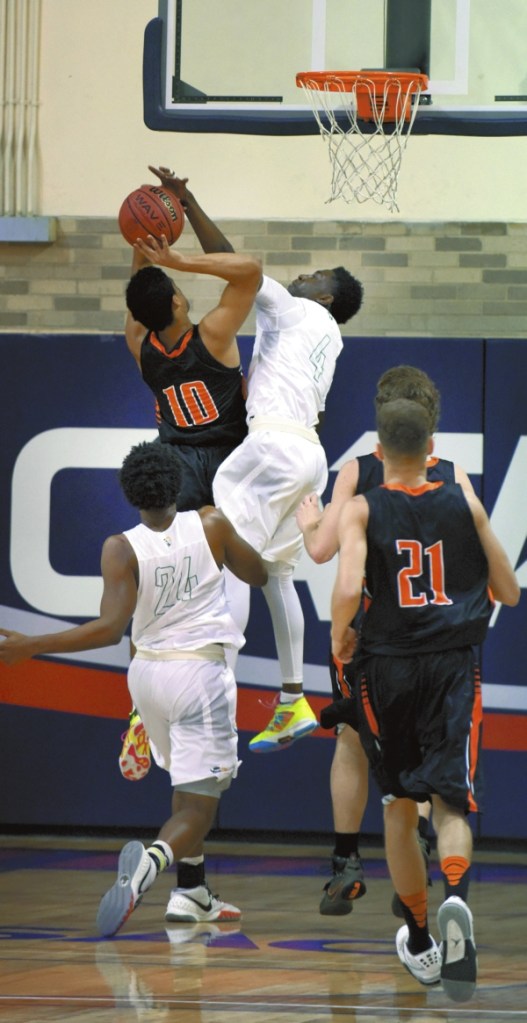 SALISBURY — North Rowan’s boys were such a human whirlwind in the first six minutes that it looked like Chuck Norris kicking and chopping a hapless bunch of bad guys into submission.
When Davie coach Mike Absher looked up at the scoreboard, it was North 26, Davie 9.
But give the War Eagles credit. They clawed back twice and gave fans at Goodman Gym a memorable semifinal in the Dale’s Sporting Goods Sam Moir Christmas Classic. North needed 32 points from relentless Joseph Scott and 19 points and a sharp floor game from Jalen Sanders to win, 83-75.
Scott’s previous best was 24.
“North is really, really good,” Absher said. “We play in a tough 4A league, and they would fit right into the Central Piedmont Conference. North was sensational at the start, but our guys are tough and they’ve got big hearts. That’s going to win us some ballgames.”
Big hearts weren’t quite enough in this one. Scott was awesome, and Sanders sacrificed some of his own opportunities to assist Scott. Henderson Lentz, instant offense from the 3-point line, helped out with 11 points. Josh Handy slashed for 12, including a game-capping dunk.
“Jalen can go for 20, 25, 30 points on any night,” North coach Andrew Mitchell said. “We know that, but first of all, he’s a great leader. His focus is on winning the game and doing the things we need to win that game.”
Davie got 15 points from Jordan McDaniel, 14 each from Nic Starnes and Cory Heiner, and 10 from Heath Slabach.
Second-seeded North (9-2) would’ve given anyone a fit early. Third-seeded Davie (8-4) couldn’t get shots to fall, and North was rebounding furiously and sprinting for easy shots. Getting a lot of boards were blue-collar Cavaliers Alonzo Sirleaf and A.J. Shields. Scott was finishing. He had 11 points in the quarter.
“We thought we had them down,” Sanders said. “We got that big lead and maybe we let up a little bit.”
Davie got its second wind after a technical foul allowed Starnes to knock down four free throws that stopped the bleeding. Those free ones triggered a 14-0 Davie run. A minute into the second quarter, Mitchell looked up and Davie was only down 26-23.
He wasn’t shocked or awed.
“Davie is good,” he said. “They’re tough, they move the ball, they take good shots. We’re fortunate that we’ve been playing 4A teams like Davie. It would be great to be undefeated right now, but we’ve prepared ourselves for the season by playing tough teams early. Davie made a good comeback, but it wasn’t unexpected. I was very proud of our guys for keeping their poise.”
North re-established control. Scott, Josh Ellis and Lentz made 3-pointers.
North led 47-39 at the break. Mitchell was pleased to have a decent margin. Absher was thrilled to still have a chance.
“Considering the start, we felt like we were in good position,” Absher said. “We’d watched No. 2 (Sanders) on Monday and he was just knocking down shots three steps back from the 3-point line with ease. What a special player he is, and so is No. 11 (Scott).”
North’s third quarter was almost as good as its blazing start. Xavier Haley provided a spark, and the Cavaliers led 67-51 heading to the final eight minutes.
Davie wasn’t done. North still led 72-59 with four minutes left, but Cooper Wall banked in a tough shot, and suddenly the War Eagles were surging again. When Slabach punched in a 3-pointer from the left corner with 1:30 left, North’s lead was down to 76-70.
Davie got within 77-73 when McDaniel stuck back a miss by Starnes, and the Cavaliers were going to have to make free throws to finish the win off.
Scott cashed in two free ones. Cory Heiner got a soaring rebound bucket for Davie, but then Sanders calmly stepped to the line with 20 seconds left and swished two for an 81-75 lead.
Starnes got penetration on Davie’s final possession, read the floor and kicked to the open man, but McDaniel’s 3-pointer from the right side wouldn’t fall. The rebound went to North, Handy jammed, and it was time for the Cavaliers to celebrate a hard-earned victory.
“It was still a good game for us,” Absher said. “There were a lot more positives than negatives. You battle a team like North, and it’s got to help you.”
Davie will play Salisbury for third place at 4:30 p.m.
North will play Mooresville for the championship at 8 p.m. Mitchell has coached North to tourney titles in 2011 and 2013. Sanders was one of the key players in 2013.
“I’m excited to be back in the championship,” the senior said. “A lot of people didn’t think we could make it this year.”
•••
Tournament officials urged fans to come early tonight for the championship games. Goodman Gym has been remodeled and seats about 500 fewer people than in previous years. Fans will have to be turned away once capacity is reached.