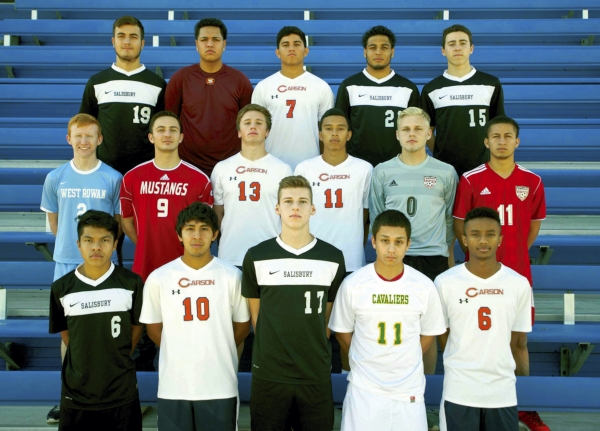 Sixth in a series of seven all-county high school teams. Football’s team will be published tomorrow, on Christmas Day.

SALISBURY — Becoming Rowan County’s Boys Soccer Player of the Year was not first and foremost in Landon Goodman’s mind during the hot days of August.

But winning another state 2A championship was a goal for Goodman and his Salisbury High School teammates. Goodman, a senior, was part of a state title team two years ago and it was really the Hornets’ only goal this season.

Goodman, who scored an astounding 66 goals during the championship run, said that going undefeated wasn’t an initial goal either. But that’s exactly what the Hornets did — 27 wins, zero losses and two ties en route to the state championship, a convincing 3-0 victory over Washington High School.

And speaking of convincing, Salisbury racked up 17 shutouts, outscored its opponents 152-14, and went through the six-game 2A playoff run with a goal-differential of 28-2.

After surviving with a third-round overtime 3-2 decision with Central Academy, which Goodman’s scored two of the goals, Salisbury blitzed through Hendersonville (4-0) and Trinity (6-0), before the state final match with Washington.

“My teammates were great, not only assisting on goals but just being there for support and motivation for every game,” said Goodman. “They’re great guys and we were a great team, so I’m thankful for them. There was no selfishness on anyone’s part. Everyone was happy to score and assist anyone else.”

Goodman, who has verbally committed to Anderson University to continue his education and soccer career, said that no big NCAA Division I schools have shown any interest, despite his 113 career goals.

Anderson is a Division II school in the South Atlantic Conference, so he will be competing against local colleges Catawba, Lenoir-Rhyne, Wingate and Queens, among others.

“I’m not sure why the big DIs were not interested, but I’m just happy to go somewhere and play soccer,” said Goodman, who was also recruited by Presbyterian and Methodist. “Anderson is a good school for me. From the beginning, Anderson recruited me and showed a lot of interest in me. I went there and visited and it’s just the right fit.”

Goodman began playing soccer as a six-year-old at the YMCA. His father, Michael Goodman, was his first coach. Landon said that his mother, Christy, has always been very supportive as well.

It was in middle school that Goodman realized that he was “pretty good” at soccer.

He also credits Salisbury soccer coach Matt Parrish, the Rowan County Coach of the Year, with improving his game.

Parrish has been at the helm at Salisbury for five seasons, winning three state championships — all in odd years — in 2011, 2013 and 2015. Parrish, also the girls soccer coach, has a record of 116-10-4 in five boys soccer seasons.

“Coach Parrish is a great person and a great coach,” said Goodman. “He made me a better player every single year.”

Parrish deflects the praise but has plenty for Goodman. “This honor for Landon is well-served,” said Parrish. “There were times this year that he put us on his back and carried us. He scored 39 goals last year as an ‘unknown’. Then, to have that kind of success this season as a ‘known’ player, it was really remarkable.”

Goodman’s 66 goals were tied for the third most in a single season in North Carolina high school soccer history. Surry Central’s Michael Richardson had 87 in 2001 and 92 more in 2002. Matt Smith (Eastern Alamance) also scored 66 goals in 2003.

Goodman and Uribe were also selected as all-region and all-state players by the N.C. Coaches Association. Gokey, Lynch and Ramirez were also all-region for the Hornets. Lynch had an amazing 38 assists and like his teammates, could have been the Hornets’ leading goal-scorer had Goodman not been there.

“All of these guys were unselfish to a fault,” said Parrish. “They all sacrificed any personal goals to achieve a common goal — a championship. Any one of those guys could have been the definitive player on any other team. And they proved that sacrifice does work out, because the team was pretty close to perfect at 27-0-2.

“The ring guy is coming on the Tuesday after Christmas break, so I know the guys are excited about that,” added Parrish.

In addition to the seven Salisbury players, the all-county team includes:

Corriher was top goalkeeper in the SPC and was voted all-region, as was teammate Delgado.

Correll was the Player of the Year in the SPC for Carson and was selected all-region, as were his Carson teammates Maldonado, Nava, Myers and Perez.

Repeating from last year’s all-county team were South’s Corriher, Carson’s Maldonado and Correll, and Goodman and Uribe from Salisbury.

NOTES: Parrish was voted a regional coach of the year in 2A as was Carson first-year coach Ryan Winchip, in 3A … and Parrish had some good help on the sideline. Salisbury’s Taylor Strode was voted the state’s 2A Assistant Coach of the Year. “Taylor really deserves this award,” said Parrish. “He worked so hard for the team … heck, one time he was out there with his injured knee, taking water off the field with a shop vac, so we could play.”

By Mike London mike.london@salisburypost.com Fifth in a series of seven all-county teams. Boys soccer will be published on Thursday and... read more