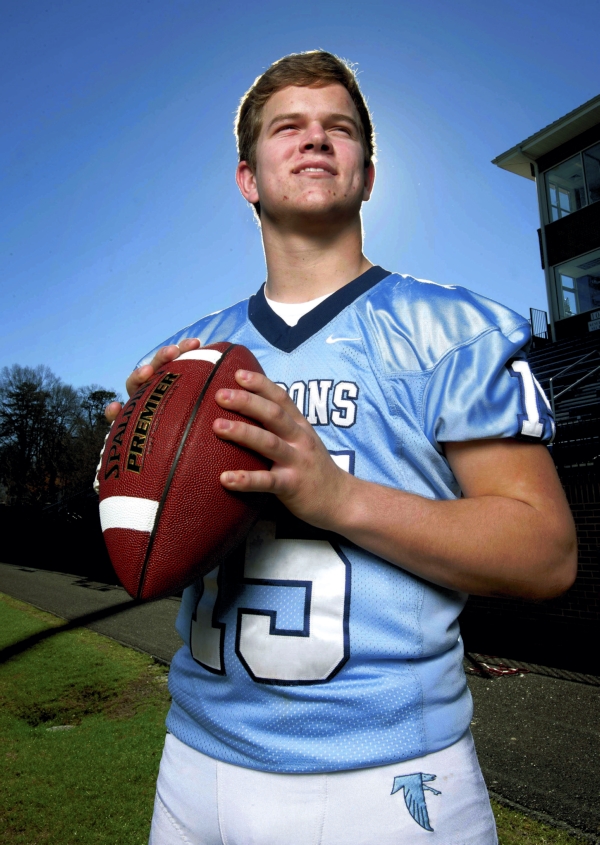 SALISBURY — Rowan County’s American Legion state championship extended center fielder Kacey Otto’s baseball summer.
August was well under way when Otto finally traded in his glove and bat for a football helmet and playbook. That reality left Otto with modest hopes for his senior football season as West Rowan’s quarterback.
“Honestly, I just hoped to do as well as I did last year,” Otto said. “I got a late start, and we had a new head coach (Joe Nixon).”
The county’s only returning starting quarterback, Otto soared above anyone’s expectations on his way to Rowan County Offensive Player of the Year honors. He is West’s first offensive honoree since running back Dinkin Miller ran wild for a 3A state runner-up team in 2011.
Otto rushed for 1,016 yards (second-highest total in the county) and was only the third player in county history whose primary position was quarterback to reach the 1,000-yard milestone. The other two were Salisbury option QBs John Knox and Brian Bauk.
Otto has 4.6-4.7 speed and got most of his rushing yards on designed runs or scrambles after taking snaps. But he also lined up as a running back some, with backup QB Bryant Young on the field. Otto ran for 12 touchdowns.
Otto turned in a marvelously efficient passing season for a run-first team. He had a completion rate of 62 percent and piled up 1,828 aerial yards and 18 touchdowns, with only seven picks.
“That was due to great receivers and a great offensive line,” Otto said modestly.
In West’s 28-27 overtime playoff win over Carson that was the signature game of the year in the county, Otto produced the greatest single statistical outing in county history with 337 passing yards and 167 rushing yards — 504 total yards.
“He had a really good season, played multiple positions for us and was a good leader,” Nixon said. “Opponents had to account for him. He’s a tough, hard-nosed football player.”
Otto has decent size — West listed him at 6 feet, 195 pounds — but he looks smaller than that. With his pads off, he looks a lot more like a center fielder than a QB.
But he has a strong arm, he has surprising acceleration in open field, and he fearlessly plows like a fullback when he’s in traffic. South Point coach Mickey Lineberger called him “a load,” after South Point survived the Falcons, and that’s exactly what he was. He motored right through arm tackles.
Otto also has the leadership qualities that Nixon mentioned. For a 10-4 team that reached the third round of the playoffs and had to be one of the top teams in 3A, West Rowan dug a lot of early holes. The Falcons won five games that they trailed in the second quarter or later.
“That was the great thing about this team,” Otto said. “Everybody had a role. No one got down when we got behind. Everyone stayed up.”
Otto threw decisive touchdown passes to Juwan Houston in comeback wins at Central Cabarrus and Robinson.
West trailed Carson, 21-7, at halftime in that overtime game, but Otto’s 26-yard touchdown run tied it at 21-all at the end of regulation. His touchdown run in overtime led to Austin Morrison’s decisive PAT.
Otto led his last comeback at South Point in the playoffs. The Falcons scored late to trail by one and went for a 2-point conversion and the win.
“South Point read the play we ran right,” Otto said. “It just didn’t work out.”
Otto played three varsity seasons, but statistically speaking, he essentially had a two-season career. His 3,148 career passing yards rank fourth in West history and 19th in county history.
Otto’s 2,844 yards of total offense (rushing plus passing) as a senior was the fourth-best season in school history and ranks ninth in county history.
He accounted for 49 TDs in his career (32 passing, 17 rushing), and his 4,489 yards of total offense put him fifth at West behind K.P. Parks, B.J. Sherrill, Tim Hogue and Miller.
Otto’s strongest competition for the award came from East Rowan athlete Max Wall, West receiver Kortez Weeks and Carson receiver Brandon Huneycutt.