From doctor to patient to pin up? 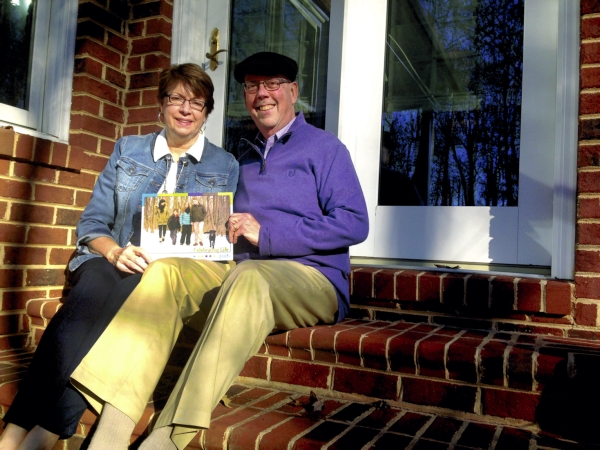 David and Charlotte Hall hold a 2016 calendar from the Blood and Marrow Transplant Information Network. David is one of 13 survivors nationwide featured on this calendar. Photo by Susan Shinn, for the Salisbury Post.

You might know Dr. David Hall is a retired obstetrician and a cancer survivor. You might know he plays bass guitar in the praise band at First Presbyterian Church, and sings in the men’s chorus at St. John’s Lutheran Church.

You might even know he volunteers at Rowan Helping Ministries.

Last fall, Duke University Hospital nominated David to be a part of the 2016 calendar for the Bone & Marrow Transplant Information Network. There he is, playing bass guitar and photographed by Sean Meyers for the month of January.

David is also a part of the Rowan Helping Ministries calendar for 2016. He is a volunteer with the Crisis Assistance Network, where he conducts interviews.

“I was looking for a volunteer opportunity that would be similar to being a doctor.  Crisis interviewing seemed to be the right fit,” David says. “My eyes have been opened to the roadblocks that people in poverty have to deal with. I have a better understanding of generational poverty and the employment, transportation and emotional roadblocks our clients encounter.”

It’s been more than three years since David’s diagnosis of acute myelogenous leukemia. He underwent aggressive chemotherapy, and received a cord blood transplant at Duke on May 29, 2013.

“It’s almost impossible to believe where we were three years ago,” says Charlotte, David’s wife. “You think about the results more.”

Along with his volunteer work, David is also a volunteer ambassador for the Carolinas Cord Blood Bank, helping to educate fellow physicians about the importance of saving cord blood. Because cord blood donations are not marked, David will never know the two babies who saved his life. During his career, he delivered some 5,000 babies, so his mission is to pay this gift forward whenever possible.

“Each survivor’s story is incredible, and his really was,” says Marla O’Keefe, BMT InfoNet’s director of outreach. “We work with 250 transplants programs across the United States. Our nominees are all embracing a second chance at life. There’s hope for everybody.”

The organization serves as a clearinghouse to provide information to transplant patients and their families before, during and after the procedure.

BMT InfoNet asked David to select a local photographer, and choose the activity he’d like for his photograph.

“It’s such a happy time,” he says about his participation in praise band. “My involvement with music is a celebration.”

David and Charlotte also volunteer with the BMT InfoNet’s Caring Connections program, talking with patients undergoing treatment, and their caregivers.

“We’ve talked about the normal things you worry about,” Charlotte says, “the chemotherapy reactions, the symptoms, your appetite and energy level. You don’t want to be discouraging, but you do want to be honest.”

Last week, David and Charlotte went to Duke for a check-up, and got a good report.

“The doctor told him to keep doing whatever he’s doing,” Charlotte says.

If that involves posing for a calendar or two, then so be it, David says.

Of course, you know what members of the Hall family will be receiving for Christmas.

“Whether they want calendars or not,” Charlotte says, “they’re gonna get them.”

The BMT InfoNet calendars are $15 and may be ordered at www.bmtinfonet.org.

The Rowan Helping Ministries calendars are mailed to donors who give at least $50 to the HOPE calendar campaign to sponsor a meal in Jeannie’s Kitchen. You may call Kris Mueller at RHM for details at 704-637-6838, ext. 103.