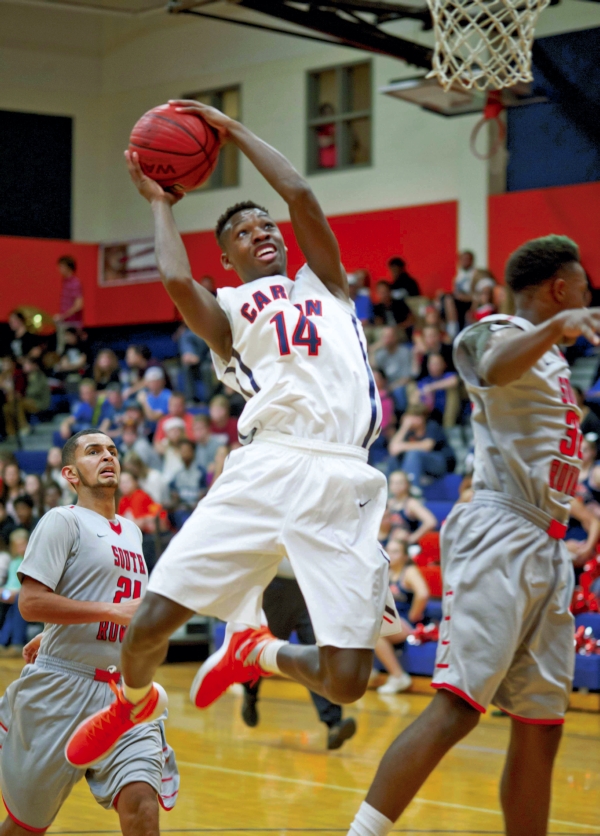 CHINA GROVE — Well, that was an impressive week for the Carson boys basketball team.

Never mind that the road ahead is littered with speed bumps — and upcoming dates with the high-powered Cabarrus County schools. Just days after trimming West Rowan, the Cougars enjoyed their second straight SPC victory Friday night, a 70-45 rout of visiting South Rowan.

“We’ve had a nice run with the Rowan part of our conference (schedule),” coach Brian Perry said after Carson (5-2 overall) improved to 3-2 in league play. “That’s what we needed to do. Next week we’ve got some tough games.”

Indeed. Carson will face off against SPC rivals Concord and Northwest Cabarrus next week, with a rugged non-conference matchup against Mount Pleasant sandwiched in between.

“At least we’ve got it pointed in the right direction,” junior guard Malon Herron-Cuthbertson said. “We played as a team this week. Last week we weren’t together. This week we were.”

The Cougars shook off a rusty start and handed winless South (0-7, 0-5) another lopsided loss. Jailen Williams paced Carson with a season-high 13 points and teammate Cameron Prugh had 11, reaching double figures for the fourth straight game. On defense, burly Ryan Bearden turned his second contest of the season into a game of show-and-tell. “It’s so good to have him back,” Perry said.

First-year Raiders’ coach Andre McCain wasn’t turning cartwheels outside the South locker room, but he understands he’s part of a down-to-the-studs rebuilding project. “I want to win as much as anyone,” he said afterward. “I’m not giving up on them and I’m going to keep teaching them, keep working them. It’s my job to make sure they keep getting better.”

South had to be pleased with the opening quarter, which ended with Carson ahead by a point. “We had a good start,” noted senior Tre Littlejohn, whose 3-pointer from the left corner tied the score, 10-10, with 2:38 remaining in the first period. “But in the second quarter, their crowd got into it, they grabbed the momentum and they put 26 on us. Most of that was off turnovers and offensive rebounds.”

Carson led 20-14 early in the second quarter when it turned up the volume and scored 14 unanswered points. It started when Brendan Westbrook took perfectly placed, fast-break feed from teammate Armoni Hogue and hit a highlight-reel layup. Later Herron-Cuthbertson beamed in a 3-ball from the top of key before successive put-backs by Owen White gave the Cougars a 34-14 edge.

“We got a lot more energized during that run,” Herron-Cuthbertson said. “Coach P told us to bring more energy. I mean, they had strength. They were scrappy. But we didn’t let them get second shots. We played hard on defense, we talked and we rebounded.”

And they won going away, stretching their lead to 59-31 when Jamarius Hairston scored on a soft dunk with 6:07 remaining. Now comes the hard part — beginning with Tuesday’s slugfest at Concord.

“I think we’ll be ready,” Perry said. “Maybe we weren’t prepared for what Robinson brought to the table last week (in a 73-35 loss). We studied them. We read about them. But until you’re on the floor with them, you don’t understand the intensity they play with. Now that we’ve experienced that, hopefully we’ll be better prepared when we go to Concord.”