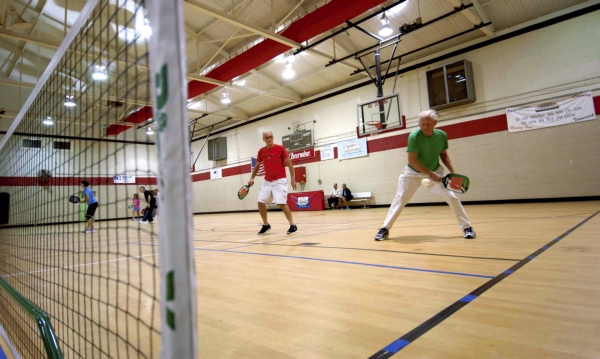 The national craze of pickleball that started Seattle, Washington, 50 years ago has arrived in Salisbury. Pickleball is described as a cross between ping pong, tennis and badminton played on a small court with a low net, small paddles and a wiffle ball. Hall’s Gym is the place where 20-30 pickleballers come to play their games. Jon C. Lakey/Salisbury Post

Invented in the 1960s on the west coast, the sport of pickleball has arrived locally, suddenly gaining momentum with various groups across the county. Salisbury Parks and Recreation and the Rowan County YMCAs, along with a few local churches, have active games and practices on a regular basis.

Pickleball combines elements of tennis, badminton and table tennis (ping pong). It is played on a 20-by-44-foot badminton court, using a net similar to tennis and a polymer or wiffle ball. Rules are similar to tennis with a few modifications. It began as a children’s game in the state of Washington, but has evolved as fun for all ages.

Last Friday, Tony McDowell joined with Parks and Recreation aide Vito Palmieri to make sure that games were going well at Hall Gym. The gym is a full-length basketball court that is divided into three pickleball playing courts on this day with doubles games played on each one simultaneously. That means that 12 players are playing, and another group of nearly as many was waiting to play.

“It took 50 years for this game to get to Salisbury,” McDowell said. “Pickleball got started here with the Senior Games, but it’s fun for all ages. We play mostly doubles, and everybody can play eight to 10 games without being exhausted. Singles are a lot more taxing.”

Robin Hudson, one of the more accomplished players, said, “My sister called and said that we are going to play pickleball. I didn’t know what pickleball was. It is competitive for all ages, but more fun because of the social and team aspect. Anybody can play and be good at it.

“We put a court in our driveway this summer. My mom and dad, Ron and Cathy Saine, and my sister, Carla Benson, are here today. My mom wasn’t competitive till now, and I hope pickleball will keep her active for a long time. I usually just get to play on Fridays because my pesky job gets in the way,” Hudson said.

Competitive tennis player David Post said, “The Wall Street Journal did a story on the popularity of pickleball five years ago. It brings people back out who have a tennis background, but the sport is different from tennis in several ways. The receiver has the advantage, backwards from tennis. The courts are compressed so the right return when you are in trouble is a dink shot, rather than a passing shot or overhead. There is less long movement but plenty of quick lateral movement.”

Points are earned only by the serving side. The serve must bounce on the opponent’s side and the return must bounce once before the ball is in play and can be hit in the air. There is a seven foot “no volley” lined area on each side of the net where players may return the shot only if the ball is likely to remain in that area. Games are played to 11, 15 or 21.

Palmieri works with McDowell to set up the courts and keeps track of equal playing time.

“Pickleball is one of the fastest-growing sports, and it is very popular here,” Palmieri said. “The perfect situation for me is if I can keep 12 players on the court and 12 more waiting to play. We started with nine players in February and we are now up to 41. Later on, we will pick the best, and they will compete in the senior games in April. Last year, Robin Hudson won a silver medal and we got a couple of bronze. We want more this time.”

Salisbury Parks and Recreation currently offers the pickleball courts at Hall Gym on Mondays and Fridays only, but is considering other options.

“Obviously, pickleball is a good thing,” Recreation Coordinator Steve Clark said. “We currently offer the courts here outside of our regular operational hours, and there is a demand for more availability. Outside courts are an option and we can explore that. The game will be faster outdoors if played on our tennis courts. We may eventually have to charge a small fee to play, similar to our Zumba classes.”

The JF Hurley YMCA in Salisbury has pickleball scheduled for Tuesdays, Wednesdays and Thursdays.

“We just recently started pickleball here, and it has already grown from a program standpoint,” Executive Director Richard Reinholz said. “Two courts are available for members to use and Tuesdays are free to non-members until January. Pickleball is a growing activity for all ages and especially in the older adult community.”

The YMCA of Rowan County also offers pickleball opportunities at the East and South locations. Check each Y’s website for specific times.

“I absolutely would play pickleball every day if I could,” Hudson said. “It is more fun, win or lose, than any sport that I have played before.”

Looks like the demand for more places to play is on the rise, and Rowan is quickly catching up with pickleball’s national popularity.