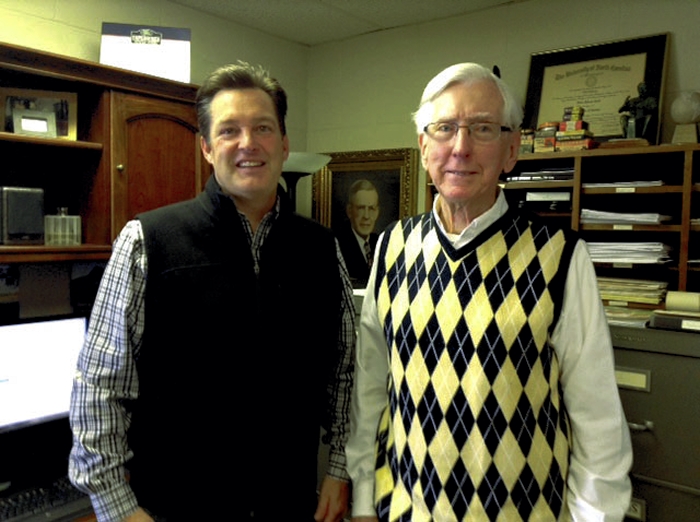 David Freeze / for the Salisbury Post Allen Cook (L), the fourth generation of the Cook family that Gerald Ross has worked for.

Gerald Ross still loves to go to work. And he has for 60 years. All for J.H. Cook & Sons, the shoe repair company located in Granite Quarry. Ross was hired on Nov. 18, 1955, the day after he heard that the Cook family had a job opening at their Durham warehouse. Ross, 19 years old at the time, rode his bike on a rainy November day to apply for a job for the first and last time of his life.

John Henderson Cook opened a shoe repair shop in Salisbury in 1902. Ross, now 79 with a head full of white hair, said, “Back then, everybody had their shoes repaired.” J.H. Cook’s sons, Robert Sr. and Curtis, ran the company when Ross first applied. Curtis Cook asked Ross when he could come to work to which Ross replied, “Would tomorrow be soon enough?” He has been with them ever since.

After working in sales in Greenville, S.C., then finance in Durham, Ross was promoted to the Greenville branch manager in 1974. He served in that capacity until 1981.

When referring to Ross, current owner Allen Cook said, “Gerald Ross is the perfect mix of honesty, dedication and loyalty, qualities hard to find in employees today.” Allen Cook recalled a favorite story about Ross. While Ross had the responsibility to open the building each day, Allen Cook tried to beat him to work. Cook said, “I couldn’t do it. The earlier I came to work, the earlier that Gerald did. He always was able to get here first. I finally gave up.” Ross admits to being quite competitive. J.H. Cook & Sons has other employees with longevity of 54, 47 and 39 years.

Now serving in phone sales three days a week, Ross took time to reminisce about his years of service. He said, “The shoe industry has changed so much. There are far fewer shoes to be repaired these days. Almost no shoes are made in the United States. But we remain one of a handful of the largest shoe repair companies in the country.”

Ross values his relationships within and outside the Cook Company. He said, “I never once considered leaving. The Cooks are so respected within the industry and I wanted to be the same. I wanted to earn respect, never demand it. There are great people here. My work has never been stagnant and I have always been able to progress within the company.” Ross served on the Board of Directors for the Shoe Service Institute of America.

Excitement in his work was defined by Ross: “Every day is exciting. Accomplishing goals and just being a good employee are exciting to me. But it is important to have a stable work environment. Just being around the Cooks has been good motivation. They have been the finest people and I wanted to make sure it was a two-way street.”

Allen Cook helped Ross remember a few other exciting times during his term of employment. Cook said, “Once a thief had climbed a fence and taken some property from our Atlanta warehouse. Gerald jumped in his car and took off after him. He demanded that the thief return the property and that is exactly what he did.”

Another time, Allen Cook and Ross were staying in a La Quinta Inn on a business trip. Ross said, “Two thugs came in through the door to the courtyard. They had a gun and demanded that we put our wallets on the bed. Those men thought that we would have more cash than we did. They ended up only taking our cash and leaving everything else. I am just glad that we didn’t get shot.”

When away from work, Ross said, “I want to be a good grandfather and always enjoy working in the yard. I just want to stay active.” Ross is married to Carolyn and has two daughters, Melissa and Jennifer.

When asked about the future, Ross said, “Of course, I do less long-term planning now for myself. I want to keep on working as long as I am effective and productive. I have no regrets; it’s been a good journey.”