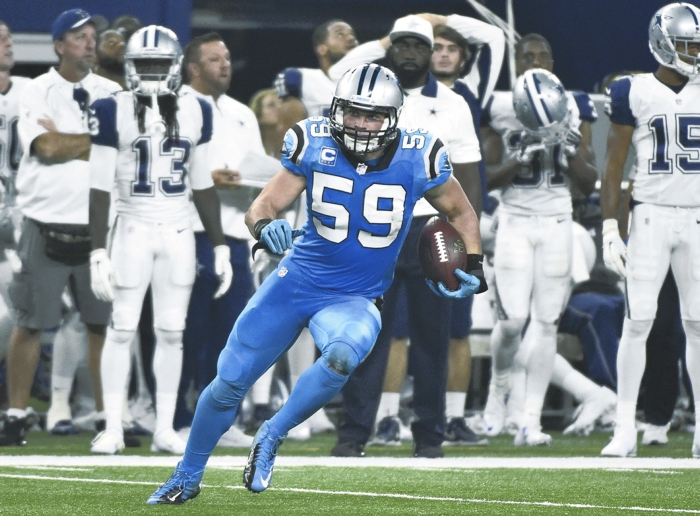 CHARLOTTE (AP) — Cam Newton insists that beyond that All-American look and nice guy persona, Carolina Panthers teammate Luke Kuechly has a “dark side.”

It’s a side that only comes out when Kuechly steps between the white lines on the football field.

“He has the smile, the charisma, the lawyer look, but he has like a demolition mentality,” Newton said after Carolina’s 33-14 rout of the Dallas Cowboys on Thanksgiving Day. “That’s Luke. We all love him. I wouldn’t want him any other way.”

Kuechly, the NFL’s Defensive Player of the Year in 2013, is playing like the league’s top linebacker again after missing three games earlier this season with a concussion. He had two interceptions against Tony Romo, including one he returned for his first career touchdown.

When Kuechly speaks, he’s kind, humble and sincere, gentle as a teddy bear.

At training camp, when players are hot and tired after a long day of practice, Kuechly is always there until the end, signing autographs for fans up until the final horn blows to call players in for team meetings.

Defensive tackle Dwan Edwards calls Kuechly “the nicest guy you will probably ever meet in your life.”

He said that changes when he puts on a helmet.

“He definitely has a switch,” Edwards said. “He’s trying to be the baddest guy on the field.”

“That’s the thing, he’s like Dr Jekyll and Mr. Hyde,” Newton said. “But in my eyes, he’ll always be Captain America because he makes every play, he shows up, and he prepares extremely well.”

The Panthers have been a top 10 defense since 2012, when Kuechly joined them as a first-round pick. He has 75 tackles, three interceptions, two forced fumbles and a sack this year for the league’s fourth-ranked defense.

He’s also the undisputed leader of the unit.

Panthers coach Ron Rivera said it was Kuechly who changed Carolina’s defensive play call in the second quarter after Romo audibled into a different play at the line of scrimmage. That resulted in Kuechly’s first interception

“He’s playing very heads up football,” Rivera said. “He’s really into it. He is understanding what the opponent is trying to do. He’s expecting, anticipating very well.”

If there’s one thing Kuechly isn’t good at it is talking about himself.

He gets uncomfortable with that notion, regularly deferring praise to his teammates — and the defense he takes so much pride in being a part of in Carolina.

“Are you on the rise, or are you plateauing? I think we continue to be on the rise,” Kuechly said. “Early on we weren’t able to finish in some of the earlier games. But I think this week and in the past couple, we have really been able to spread ourselves away from the other team and gain a big margin.”