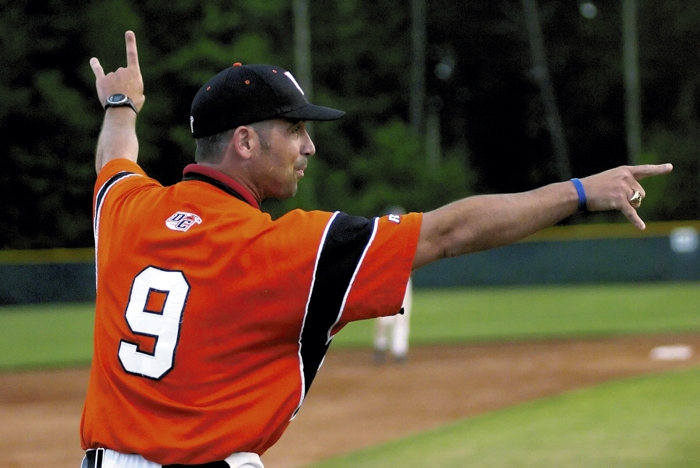 Wayne Hinshaw file photo/for the Salisbury Post ... Coach Mike Herndon signals from the third base coaching box during a game from his years at Davie County, Herndon has accepted the baseball coach position at Salisbury High School.

SALISBURY — Mike Herndon coached 312 high school baseball victories at Southwest Guilford and Davie County.
His next coaching win will come at the helm of the Salisbury High Hornets. He was recently named as the 2A school’s new head coach.
“I feel a little bit like Michael Jordan — retiring and then un-retiring,” joked Herndon, whose last day in a dugout was in 2012. “I’ve been up in the stands coaching the last few years, second-guessing with the best of them.”
Herndon will always be associated with the Davie War Eagles because he was the head baseball coach in Mocksville from 1999-2012 and is the winningest coach in the program’s history.
But he’s also a Rowan County guy. He and his wife, Carol, have made their home here since the late 1990s. His daughter, Bailey, is a student at West Rowan High.
“I love Davie and Davie has always been great to me,” Herndon said. “But now I’ve got an opportunity to try to give something back to Rowan County. I thought about it, I prayed about it, and I feel like this is the right thing to do.”
Herndon would’ve been happy coaching Davie baseball forever, but then his son, Carson, came along, and Carson wasn’t an average athlete. He quarterbacked Davie to the 2010 4A state championship game in football and he was an all-state shortstop in baseball.
Carson signed with Liberty’s baseball program, triggering life-changing family decisions.
Carol resigned in 2011 from Food Lion after a 22-year career that took her to the top level of management. Mike stepped away from Davie baseball after the 2012 season.
“All I’d preached for years was how family always has to come first, no matter what,” Mike said. “I was going to watch my son play college baseball. I coached a lot of great players at Davie, but my favorite player is always going to be Carson. I left what I love to watch him play.”
Carson’s career at Liberty took twists and turns, including a surprising transition from slugging shortstop to overpowering pitcher.
At 6-5, 245 pounds, he has pro size and velocity. He was the opening day starter in 2013 for a Liberty team good enough to make the NCAA tournament. But on April 25, 2014, he underwent Tommy John surgery on his right elbow. He’s healthy now, and he has one year of college eligibility left.
That’s put Mike Herndon in an unusual position because his top priority is being in the ballpark to support his son whenever he pitches.
“That’s what made saying yes to Salisbury tough,” Herndon said. “When you coach a baseball team, you expect a commitment from all your players, and they have a right to expect a commitment from you. But I’ve talked to the Salisbury administration and I’ve talked to parents and I’ve talked to players, and everyone here understands that if there’s a conflict, if Carson is pitching on a Friday and Salisbury is playing on a Friday, then I’ll be watching Carson pitch.”
That would be a problem, except that Herndon has the perfect assistant coach ready to step in if he’s not available. That will be Scott Maddox, the guy who coached the Hornets from 2001-2015. Maddox knows the players, knows the parents and knows the teams in the league.
“Taking the job this season was contingent on my being able to watch Carson play,” Herndon said. “But Scott’s going to help a lot, so everything will be fine. And after this year, Salisbury’s got me.”
There aren’t many coaches available with Herndon’s credentials.
Herndon coached Southwest Guilford, near Greensboro, for seven seasons (1991-97) and piloted the Cowboys to three conference championships and four second-place finishes. His teams went 101-60, with his 101st win coming in a 6-4 victory over Cherryville that gave Southwest Guilford the 1997 2A state championship.
Beginning with the 1999 season, Herndon directed Davie for 14 years. His teams were 211-130, winning five conference tournaments and four regular-season championships. In Herndon’s last two seasons, Davie won both crowns.
Herndon stepped out of the limelight and went to work as a P.E/health teacher at South Davie Middle School. It gave him lots more family time.
If you’re wondering why he would come back from a four-year hiatus to coach a 2A school after all that success at 4A Davie, you have to understand he’s a baseball lifer. He played college ball at High Point, and the game is never far from his thoughts.
“I was pretty content, happy with my life right where it was,” Herndon said. “But baseball just kept tugging at my heart. Baseball is in my blood, I guess, and I had this itching to get back to coaching. I love it, and I missed it. I know it’s gonna be a challenge at Salisbury, but they have some great kids there. My wife said yes, my kids said yes, and I’m excited. The opportunity to coach at a Rowan County high school doesn’t come along very often.”
Herndon is still teaching at South Davie, but a transition to Salisbury next fall is likely.
Earlier this year, Carol Herndon also took on a challenge as executive director of “Food for Thought,” an ambitious program whose mission is to provide healthy weekend meals for hundreds of “food-insecure” children in the Rowan-Salisbury school system. Volunteers sort and pack food in plastic shopping bags. The bags are placed in backpacks and sent home with children on Friday afternoons.
Salisbury baseball players already have spent time filling food packs, so they’re getting an idea of how committed the Herndons are to giving back — off the field and on it.
“As a team we’re going to work hard and we’re going to trust in our preparation to win some ballgames,” Mike said. “And we’re going to have fun doing it.”