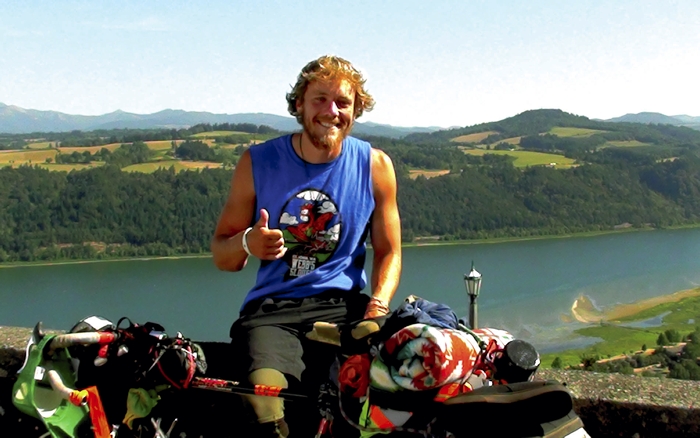 I have to admit that I love meeting people and hearing their stories. Writing an article lets me get to know them to a certain degree, and often the result is that we stay in touch afterwards. The likelihood of them doing something else interesting, or knowing someone that I might want to interview, is more common than you might think.

But I didn’t have to get to know Ethan Horne. I first met Ethan in 2003 when he came to the South Rowan YMCA to play basketball and was placed on a fifth- and sixth-grade team that I have been coaching for a while. Ethan was chubby kid who was slow, but he could shoot. And he was very coachable. Those coachable kids are such a pleasure to have on a team. I used to laugh that I spent most of my time hollering at Ethan to get on down the floor. His teams over those couple of years probably only lost a game or two, and Ethan didn’t seem to mind that I kept asking him to run harder.

Just a few short years later, a fit Ethan ran very hard and became one of the top cross-country runners at Carson High School for Coach Dwayne Fink, a long- time friend. His cross-country competition was shortened by a serious injury.

About that same time, Ethan and I both worked together at the East Rowan YMCA. He was headed off to Appalachian State University where I thought he would find additional success. He was smart and one of the most polite young men that I knew. We didn’t see each other often during his college years, but his mom would fill me in when I would see her at South Rowan Library.

This past August, right after my own return from a long-distance cycling journey, I saw Charlene Horne again at the library. She told me that Ethan and his brother were on a long ride that kept getting longer. Ethan had graduated at ASU and made a last minute decision to head west with his yard sale bike and little else. On that day, I think she told me that Ethan was now riding alone and headed into Florida.

Often, when I talk with people about my own rides, I kid with them about riding along on the next one. For various reasons, nobody is seriously interested in doing it. But the more I thought about it after Charlene told me what he was up to, I was sure that Ethan Horne was the perfect candidate to do this.

So fast forward to this past week. I was at the South Y when Ethan walked up and tapped me on the shoulder. I was working with a client who didn’t get much of my attention over the next 20 minutes. There is a certain camaraderie between endurance cyclists, more so for those who are willing to ride alone. We made plans to meet for an interview for a newspaper story, the one that was published in Saturday’s paper.

It turned out that in Ethan’s 8,000 miles on the road over six months, we had ridden through some of the same places. On top of that, we both still want to ride to some of the places that the other has already been. Counting a look at his bike, our talk lasted for about 2½ hours. Still, such an adventure is hard to capture in that amount of time.

Here were a few highlights that didn’t make Saturday’s story. I have now cycled in 35 states while Ethan has ridden through 25. I want and need to ride the Southwest and he has done it. He wants to ride the Northeast and I have done that. I paid particular attention to what he said about the Southwest and Ethan got a book about my ride through the Northeast in the summer of 2014. I bet we will end up sharing information again before those next rides happen.

Most interesting to me were several facts. Both of us think that Montana is the most amazing state that we have seen. The “big sky country” is just that, so beautiful as far as you can see. I once camped out while watching four individual thunderstorms in the early evening, all at the same time. Not a one got close to me.

On our rides down to Key West, we had two more things in common. The famous Seven Mile Bridge is fairly new, and luckily there is a bike lane that leads out on the old bridge of the same length. The problem is that if you follow the old bridge it deteriorates rapidly and finally is closed about 3½ miles from the entrance. So the only option is to backtrack and get on the new bridge. I felt dumb doing this, but Ethan did too. Once we both got to Key West, neither of us was impressed. We had seen much better places, especially beaches and scenery in other less publicized towns.

While we had quite a bit in common, including some apprehension during the first days on the road, the big thing that we both agree on is that America is in good hands. The good people have found us out on the road over and over. And finally, this kind of journey leaves us both with a desire for more. Just like Ethan said, “Adventure gets in your blood.” Yes, it surely does.