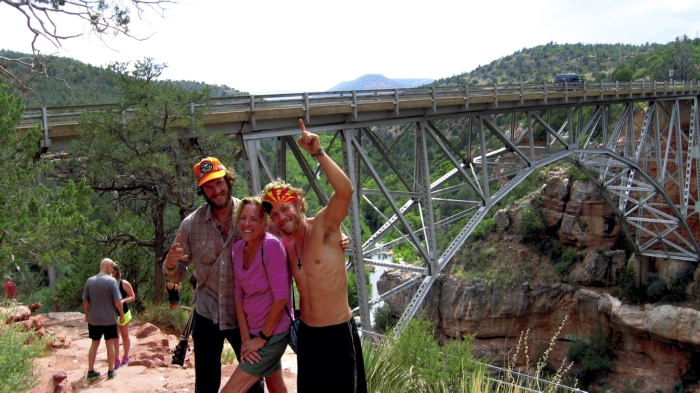 Once in a while, a spur-of-the-moment decision becomes something very special. Such was the case when Ethan Horne wished his brother good luck towards his plan to bicycle from Wilmington, N.C., to Portland, Oregon. Dylan Horne and his friend, Eric, had planned for months to ride east to west while doing a documentary on cycling conditions in the states they encountered. Eric Vosburgh and Dylan are friends and former coworkers.

As Dylan and Eric pedaled toward Salisbury, Ethan decided to ride along, saying, “I will just ride a few days with them. I might make it up to Boone or even into Tennessee. I had no gear, only carrying a book bag. The bike had been purchased at a yard sale during high school.” Not that Dylan and Eric were much better off. No one had tents, sleeping bags or any lights. Ethan added, “We hit an Army surplus and got some things. The plan was to figure it out as we rode.”

After about a week, the crew of three decided to take a rest day in Nashville. Ethan said, “We all had some apprehension about the ride by this time. I began to wonder what I was doing here.” Eric eventually left the group to keep on a tight schedule, while Ethan and Dylan wanted to take time to see things. Ethan’s bike problems caused him to hitch a ride on to a bike shop, while Dylan kept riding. The brothers passed through Kentucky and Indiana.

Just west of Chicago, Ethan and Dylan split up for the first of several times on the trip. Ethan was given a set of panniers (saddlebags) by another cyclist. He said, “I couldn’t believe how much room I had to carry things. The bags attached on each side of the rear of the bike.” Ethan rode on through Iowa, Minnesota, North Dakota and Montana while keeping to a schedule that included about five or six days of riding before a rest day. He began to pay a lot of attention to which states seemed to be the best cycling states. Ethan said, “Minnesota was one of them. There were bikes everywhere.”

While in North Dakota, Ethan tried night riding. “There was not much traffic, so I rode till 2 or 3 a.m. One particular night, I was so tired and looked over to my right and wondered what I was seeing. It was the first time I had ever seen the northern lights.”

In Montana, new friends offered prayers for Ethan’s protection through the rest of his journey. He experienced a hailstorm while waiting it out under a greenhouse shade cloth. Upon seeing his predicament, a building manager offered a room in a nearby building.

Idaho brought the first moose sighting and a cycling couple caught back up to Ethan after taking time to get married. The two brothers found each other again in Washington and took time to rest while in the company of a family that operated a grocery store. Ethan was told, “Go ahead and get anything you want to eat. We own the store.”

Shortly afterwards, the brothers split up again. Dylan headed for a short side trip to Canada and Ethan turned south along the Pacific Highway. Riding alone through Oregon and into California, he caught a vehicle ride before sighting the redwoods. Ethan thought, “If the trees are this big, how big are the animals?”

Joining with a German cyclist, the two riders got free coffee, donuts, surfers’ prayers and blessings and views of Big Sur and Venice Beach. They entered Los Angeles while dodging more people than cars along the beach. Ethan found a sombrero in the road and was wearing it when he had his first bike accident. With some severe scrapes and a few cuts, Ethan got first aid from a beach lifeguard.

The German cyclist wanted to cross into Mexico for just a day, but Ethan didn’t have a passport. He wondered what would happen as they entered Mexican Customs. The German got his passport stamped and Ethan explained that he just wanted to spend a day. Both were allowed to ride into Mexico while Ethan was concerned that he would be able to get back into the U.S. No problems occurred on the return trip and Ethan’s bags were not checked.

The next goal was to reach Flagstaff, Arizona, for a visit with his mother who had flown in for a reunion with Ethan and Dylan. Available water was a big issue as there was no shade and Ethan developed a severe thirst. This prompted Ethan to accept a lift to Phoenix where he then got back on the bike to Flagstaff. He said, “I hadn’t seen my mom since leaving Salisbury and Dylan for a month. There was a lot of running toward each other and hugging. We reconnected in Sedona, Arizona, and then we went to the Grand Canyon as a family.”

With the brothers back together again, and Charlene Horne on the way back home, Ethan soon experienced a spell of food poisoning in Durango, Colorado, and battled a big thunderstorm in Pagosa Springs, Colorado. They accepted another vehicle ride to Pueblo before riding the bikes into Kansas. The brutal headwinds caused both brothers to think about calling off the ride but they persevered and rode on through Oklahoma, Missouri and into Arkansas.

Dylan experienced flu-like symptoms and fever in Arkansas and decided to ship his bike home and end his portion of the ride. Ethan said, “We said our last farewells. I had never been to Florida and wanted to go. I met a man who helped us and found that his last name was the same as ours. I rode with him in his vehicle from Pine Bluff, Arkansas, to Fort Walton Beach, Florida. My goals became to bike the gulf coast and make it to Key West.”

Ethan remembered his night in the Everglades because his sleeping hammock was broken and alligators and boa constrictors were on his mind. On the way through the Keys, he crossed bridge after bridge and eventually made it to Key West. Ethan said, “I was not that impressed with Key West, and got a picture with the southernmost marker and soon headed back north.”

“It was a sprint back through Florida, Georgia and South Carolina. Some highlights were a church group that gave me MREs (Meals Ready to Eat), a night spent on a boat and the Halloween Music Festival in Live Oak, Florida. It started to get cold at night and I wasn’t prepared, so I was ready to get home.”

The journey totaled more than 8,000 miles. Ethan, a recent Appalachian State University graduate, has the possible journey of a lifetime behind him and a job search pending. Without a cyclometer to measure his distance on the bike, Ethan plans to take some time soon to figure out the exact mileage. Montana was his favorite state and Indiana was his least favorite. He said, “I loved the big sky country in Montana and my first breakdown was in Indiana. I think I had about 26 flats while riding in 25 states on my Cirrus road bike. I had about $200 to start but no money from Arkansas on. But the generosity of people was wonderful. You could see that they wanted to help in their eyes.”

Dylan Horne has been working on a blog at www.freewheelingdylan.wordpress.com. He said, “It was a journey of self-discovery with newfound faith in America, and fortified empathy for all.”

Ethan Horne added, “There were so many good people that cared about us. But now, one thing is for sure, the country sure seems so much smaller.”