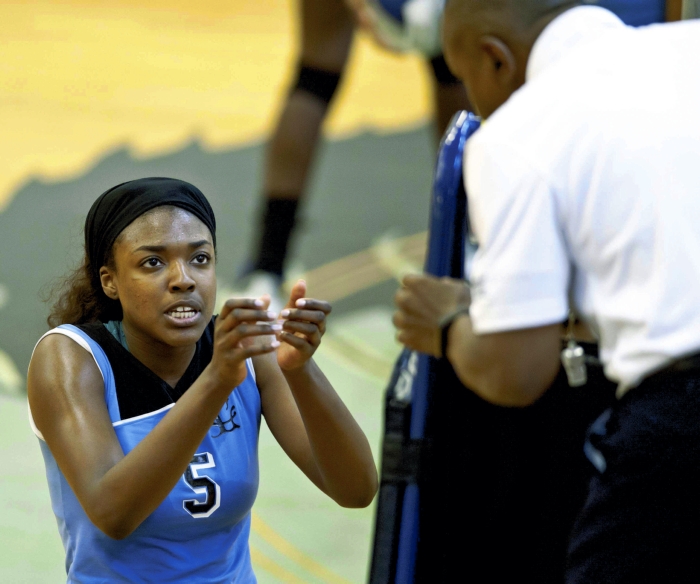 but still had eligibility under NCAA rules. So she returned to school this semester to take some

business administration courses and to continue dominating on the volleyball court.

“I came back to play because I wanted to help my team get to the CIAA Tournament,” Swiney

Saturday at Fayetteville State University. The Blue Bears finished the season 4-6 in the Southern

Division, which earned them a tournament berth.

A former two-time all-conference player, Swiney will likely garner the honor for a third time

after finishing the season second in kills per set and second in total individual points.

“I consider Lucy to be the best overall player in the conference who can play at any position,”

said Livingstone coach Reginald Isley. “She was our captain for three years and this season led a

starting lineup that consisted of four freshmen and one sophomore. Lucy had an exceptional

season on the court, and I’m expecting her to round out her career with an outstanding

Born in Monroe, Louisiana, Swiney has lived in Texas for most of her life. She received a

bachelor’s degree in biology in May and next fall, plans to join her sister, Tjacquada Swiney, in

nursing school at the University of Texas at Arlington.

The youngest of four children, Swiney has been playing volleyball for eight years. Her favorite volleyball

“Volleyball balances me,” Swiney said. “As a student-athlete, I need balance to be successful off

and on the court. My experience playing volleyball here has taught me a lot and has afforded me

the chance to learn valuable lessons that I’m sure will help me long after I’ve left Livingstone.”

When she was competing on the court at Oscar Dean Wyatt High School in Fort Worth, Swiney had no idea she’d end up 1,200 miles away.

“It’s far from home, but … through my athletic endeavors I’ve gotten the opportunity to visit a lot

of places I never would have traveled to while living in Texas,” she said. “My teammates are like

sisters to me, and that kind of relationship is very much needed given my family is so far away.

They mean the world to me.”

Isley said student-athletes like Swiney don’t come around too often.

athletically and socially,” he said. “She’s played volleyball and softball for me throughout her

time here and served as captain on both teams. She’s an exceptional athlete, but I consider her an

even better person. She’s a positive example of what our school and our athletic program stand

for. As my work-study student, her duties ranged from computer work to mopping the floor, and

I’ve always been impressed by her willingness to sacrifice for the good of the team.”

giveaways or campus clean ups. And she was instrumental in recent efforts by the volleyball

team to raise $300 for the Living in Pink Breast Cancer Support Group, sponsored by Novant

from recruiting to playing to helping coach younger girls,” Kent said. “It’s been a joy to watch

her play for the last four years. She takes personal responsibility for her shortcomings and is

quick to pick up other student-athletes when they fall. Lucy’s the epitome of class.”

Kent said Swiney has a knack for holding others accountable without being overbearing, and

get better,” Kent said. “In fact, she’s the same ‘star’ in the athletic training room as she is on the

volleyball court, and I’ve had to devise a myriad of new and more-difficult rehabilitation

exercises to keep her challenged. Truthfully, I don’t think Lucy knows anything other than

succeeding and being the best at whatever she aims to accomplish.”

A mentality that should bode well for Swiney in nursing school and beyond.