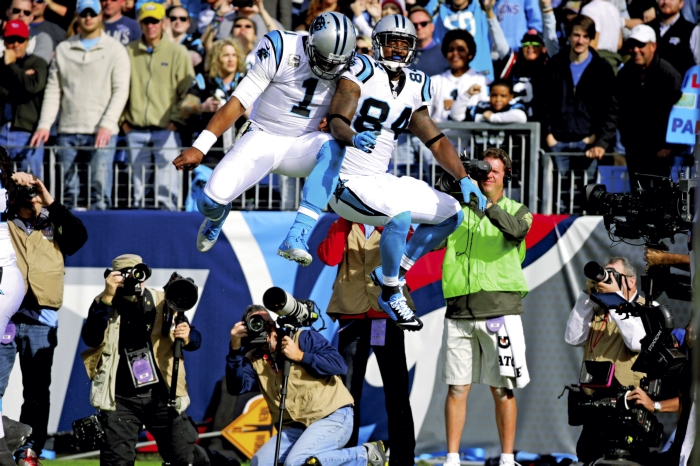 NASHVILLE, Tenn. (AP) — Cam Newton was perfect for almost a half. It was more than enough to keep the Carolina Panthers perfect for the season.

Newton completed his first 11 passes — the longest streak of his career — and undefeated Carolina shut out Tennessee in the second half of a 27-10 victory on Sunday.

Newton ran for a touchdown and passed for another score as the Panthers (9-0) extended their regular-season win streak to 13 games. Next up is a visit from Washington next Sunday.

Newton said he thought it could be a “trap game” against the Titans, who were coming off a win over New Orleans.

After sloppy finishes in their last two wins over the Colts and Packers, the Panthers outscored the Titans 13-0 in the second half.

Carolina’s defense allowed only 11 first downs and capped the dominating performance by forcing a fumble on Tennessee’s final possession.

“That was awesome,” said Carolina coach Ron Rivera, adding he was happy the defense kept up the pressure throughout the game.

Newton completed 21 of 26 passes for 217 yards. His strong start included a 1-yard scoring pass to Ed Dickson early in the second quarter.

Newton said the secret for opening the game with 11 straight completions was “clear weather.”

“The last couple games we’ve been playing in tsunamis and things like that,” he said. “We had a beautiful game in Nashville today. We had to make the most of it.”

Newton’s longest streak had been 10 completions. He added 23 yards rushing, including a clinching 2-yard TD with 2:42 left.

Mularkey said Carolina wins with strong defense, especially when paired with an offense that had no turnovers.

“They’re just efficient,” Mularkey said. “It’s not going to be 500 yards of offense and 40 points. It’s possess the football and wear you down eventually. … Eventually the dam is going to break.”

Carolina led 14-10 at halftime. The Panthers padded the lead on Graham Gano’s field goals of 48 and 19 yards and Newton’s touchdown run.

Tennessee rookie Marcus Mariota was 16 for 24 for 185 yards and an interception. The Titans had only one first down in the second half until their final possession, which ended with a catch and lost fumble by Dexter McCluster.

The Titans converted only 5 of 12 third downs.

“We knew coming in it was going to be a tough battle but we left a lot of points out there,” Mariota said.

Carolina’s Jonathan Stewart had 22 carries for 91 yards, including a 16-yard touchdown run in the first quarter. Tight end Greg Olsen had eight catches — on eight targets — for 80 yards.

Olsen had a one-handed catch in the second half, but he said Newton’s accuracy made his job easy.

“For the most part, everything was at your hands,” Olsen said. “Even if you had to go down and get it, it was super catchable, super easy and friendly balls.”

The Titans turned up the heat on their pass rush on Newton to open the second half. After having only one sack in the first half, the defense recorded sacks on three straight plays on Carolina’s first possession after halftime.

Carolina’s defense was even stronger. The Titans were held to 19 yards and one first down in the third quarter, and they never regained the momentum they showed early in the game when Mariota was effective as a runner and passer.

The Titans played with a short-handed secondary. Starting cornerbacks Perrish Cox and Jason McCourty were inactive due to injuries. Bidi Wreh-Wilson, who started for Cox, left early in the second half with a hamstring injury.

Notes: Tennessee wide receiver Justin Hunter was carted off the field with an apparent right ankle injury late in the game. … Mularkey said he had no details about Hunter’s injury but said “It’s not good.”

Catawba completes climb to the top with SAC championship