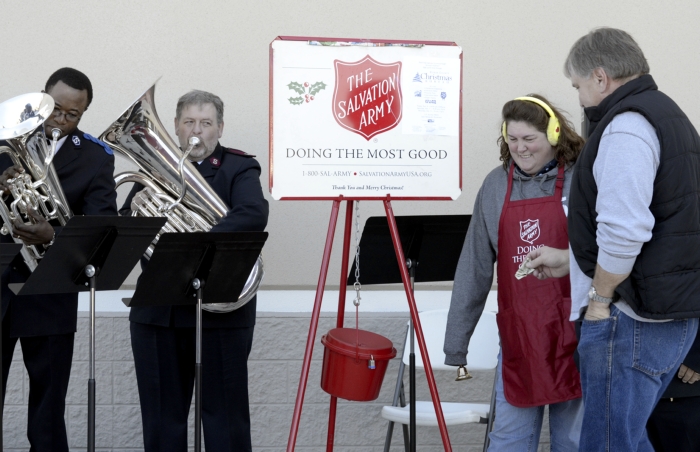 Hugh Fisher/For the Salisbury Post Volunteer Daisy Cline, center right, thanks an unidentified man for his donation as members of the Salvation Army Divisional Band celebrated the start of the charity's Red Kettle holiday fundraising campaign Saturday at Hobby Lobby in Salisbury.

Despite an early morning chill, there were smiles on faces of Salvation Army members and the customers who arrived at Hobby Lobby just after 11 a.m.

A short time later, the music gave way to the ringing of the bell that’s become a part of the Christmas shopping season in the U.S.

“It’s an amazing opportunity to do something that raises awareness in the community at this time of year,” said Salvation Army Major Chuck Whiten, a member of the Raleigh-based Salvation Army Divisional Band.

The band plays around 25 events each year, he said, in addition to appearances like Saturday’s.

Playing in the Salvation Army band at Christmas, Whiten said, “makes us think of children, and helping put food on the table, bringing joy to those folks we serve.”

Salvation Army Captain Bobby Carr said that 85 cents of every dollar raised through the kettles at local stores will stay in Rowan County to support the Christmas program, utility and rental assistance, food and youth programs.

Though the majority of bell-ringers are volunteers, some locals in need of work are paid to do so. The remaining 15 cents supports those workers as well as administrative costs, Carr said.

Starting Saturday, kettles will be set up at Hobby Lobby and Kmart in Salisbury and at the IGA in Cleveland, Carr said.

Kettles will appear at other locations between Nov. 20 and Thanksgiving, Carr said.

His wife, NaKisha Carr, also a Salvation Army officer, said that the bell-ringers help share “the spirit of the season.”

“It’s what Christmas is all about,” NaKisha Carr said, “helping others and giving the gift of the season. A little child who puts a few pennies in is as welcome as someone who puts a hundred dollars in.”

This season is crucial for local Salvation Army fundraising efforts, she said, because donations have trended downward over the previous year.

Even so, most of the people who passed by the kettle dropped in bills or change.

As she rang the bell, she wore brightly-colored earmuffs with hearts on them, and greeted passers-by with a smile.

As shoppers left the store, she wished them a happy Thanksgiving.

“For one thing, I know this money helps people,” Cline said. “For another, I love to talk to people and fellowship with them.”

And those are reasons enough to keep ringing the bell, she said.

For those in need, the last day for local residents to apply for Christmas assistance is Dec. 5.