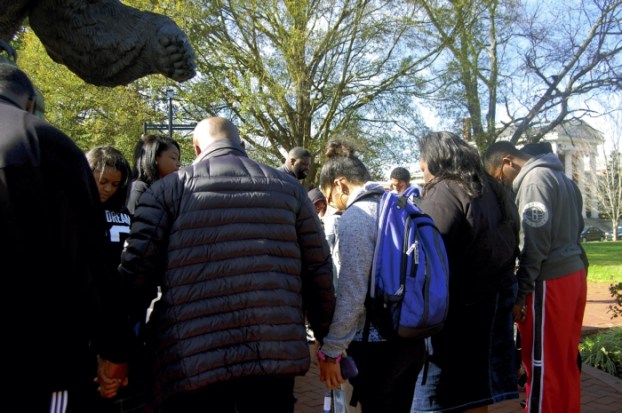 Amanda Raymond/Salisbury Post Livingstone College Campus Minister Troy Russell led a prayer with the students who were gathered at the front lawn on Friday for a rally in support of the University of Missouri.

Livingstone College students stood in solidarity with the students at the University of Missouri with a rally on Friday.

The students gathered on the front lawn around the bear statue to state and show their support for the students at Mizzou. Livingstone’s NAACP chapter and the Student Government Association organized the event.

The students wore all black to physically show their support.

Devinae Haywood, president of the NAACP chapter, spoke about the recent events at Mizzou.

“The Livingstone College chapter of the NAACP and as well as the Student Government Association are proud to stand in agreement with several historically black institutions and PWIs across this great state of North Carolina and this great nation of the United States of America to state that racism has no place anywhere, let alone an institution of learning,” she said.

Haywood said the community should pray for the Mizzou students.

“This is just the beginning of what some may call a protest, but this is a movement. A movement that is taking over America,” she said.

Haywood called for a stand against all types of violence and discrimination, including gun violence, domestic violence, social and economical issues and sex trafficking.

“We will stand up and put an end to racial hatred within our educational system,” she said.

Campus minister Troy Russell led a prayer with the students. Russell said there is no racial tension at Livingstone, but they still want to support other students who are experiencing racial issues.

“We just want to be in agreement with people who are fighting for injustice, racism,” he said.

On Wednesday, Hunter M. Park, a sophomore enrolled at the Missouri University of Science and Technology, was charged with making a terrorist threat. Park, a white student, was suspected of posting online threats to shoot African-American students and faculty at Mizzou.

The threat was posted on the anonymous app YikYak and other social media. The user threatened to “shoot every black person I see.”

“Some of you are alright. Don’t go to campus tomorrow,” another post said.

The threats were posted after the system president and chancellor resigned.

But that was far from the only racial incident at the university. In September, the student government president said people shouted racial slurs at him from a pickup truck that was passing by. And the Legions of Black Collegians, a student organization on campus, said that they were the victims of racial slurs from an apparently drunken white student while practicing for a homecoming performance.

In October, there was a swastika drawn in feces found on the wall of a dorm bathroom.

And on Thursday, a sign for the Black Cultural Center at the university was vandalized. Spray paint covered the word “Black” on the sign.

At the University of Missouri, there have been demonstrations and protests by students, a hunger strike and a threat of boycotting a game by the school’s football team.

Many universities and colleges have organized rallies in support of Mizzou students.

Raven Weathers, SGA president, said it is important for students to show support for one another.

“We wanted our brothers and sisters to know that we love them and we care for them,” she said.

Haywood said the rally was a peaceful picture of unification and a stand against future racial injustices.

“It’s a movement of solidarity, a movement of peace, a movement of the real leaders of America stepping out and saying ‘we will not let the next generation of students deal with the things that we have dealt with,’ ” she said.

The United Way fundraising campaign is going into overtime. The Rowan County United Way held its finale meeting at the... read more