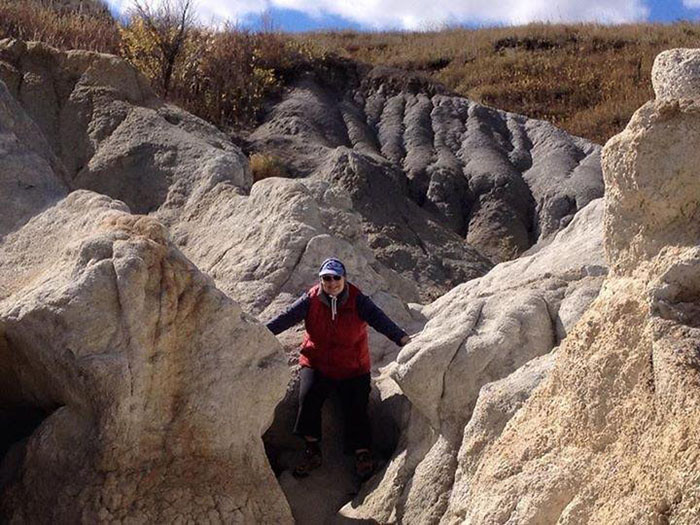 Norma Honeycutt on a recent challenging hike during an October trip to Colorado. Submitted photo

I was not sure what to expect from October. Brent and Norma’s September result had been less than expected and each had some time on vacation planned in October. Results had not been good for previous vacation trips. Kristy was still trying to establish a regular exercise program and more walking, hoping for more progress.

I asked each of them to step it up in October, to go harder after the original goals they set in their life-changing quest. Brent Parks and Norma Honeycutt have two more months remaining, while Kristy Bell is just getting started.

Kristy has only been working on her wellness for two months, having joined us in early September. She had not walked unsupported for two years and had decided to, in her words, “take my life back.” Kristy has lots of great things going on. Highlights from October include regular participation in the senior aerobics class at the South Rowan YMCA. She takes the class three times a week and has improved her balance and stamina. Kristy says, “I still have a long way to go, but I am a work in progress.” Kristy will very soon add water aerobics and other activities at the Y.

Two new friends have begun to contribute to Kristy’s bright outlook. I continually encourage her to walk more each day and to increase exercise on the days away from the Y. When Kristy asked me to allow her to return to leaning on the wheelchair as she walked, we came up with a better solution. A return to leaning on her wheelchair, now retired, would not enhance her walking as much as using walking or hiking sticks. Richard Taylor, shop teacher at West Rowan High School, volunteered to make Kristy a top quality set of walking sticks. While a local store had them in stock, Richard set out to build a better set specifically for Kristy. She is now using them daily to build her steps while walking normally.

Another new friend was suggested by Val Velte, Novant Health Wellness Nurse. Val knew Mary Miller from the East Rowan YMCA and was familiar with her story. Mary took control of her own life at just over 500 pounds in 2011 and now is in great physical shape. Val said, “She has improved her blood pressure, heart rate and endurance while working out for two hours a day.” Kristy and Mary have connected by e-mail and will meet in person early next week when they take a class together.

Usually the most consistent of the original duo, Norma was set to take a 10-day trip to Colorado during October. She would have to hold the line on her caloric input and still find ways to continue her exercise while away from home and comfortable surroundings. Norma’s cardiovascular fitness continued to improve, allowing her to amass her highest numbers of steps per day during lots of hiking. She stayed within her caloric goals. Of course, Norma admits to occasionally building her step totals while shopping.

Needing to turn it around, Brent had some serious work to do. He set a goal of more consistent exercise in October after having slipped considerably in September. I asked him to step up the intensity, pushing his heart rate. Brent assured me that he would get back on track. Now able to run/walk a 5K distance of 3.1 miles, Brent and I have enjoyed regularly challenging his best time, now just over 37 minutes.

It’s time to share the results of the trio’s goals for November and the end of the year. Kristy has lost 40 pounds so far in her two months of activity and wants to drop 16 more by the end of the year. She has set plenty of goals. Increasing her steps to 3,000 and then higher along with more exercise on her days away from the Y will help her meet them. She wants to be below 500 pounds by then end of the year, able to fix her own meals again and to fit in the family’s vehicles better. Kristy didn’t mention it this time, but two of her long term goals are to drive again and to walk comfortably while shopping.

Norma has a bigger goal than just her own improved fitness after dropping another 4.6 pounds. While she didn’t set actual weight goals for November, Norma wants to continue to exercise and log her calories. Norma wants to get her husband and sons on board with healthy living and their own weight loss. She reports that running and circuit training are her favorites and she is ready to try P90X at the Forum.

I saved the most impressive news for last. Brent vowed to pick it up and start making progress again, and that is just what he did in October. With a weight loss of 13.6 pounds, Brent took the bull by the horns. He credits his running and tracking his calories with contributing to the improvement. Brent wants to continue the positive trend by running twice a week, spin classes for two more and then other exercise on at least two of the remaining days. He wants to drop another 10 pounds in November, keeping him on track for a total of 52 pounds by the end of the year.

This was our best month so far, and I am excited to see what’s left for the rest of 2015. Brent and Norma have agreed to compete in a 5K together soon and Kristy has new doors opening every day. Keep letting them know you support them. See you again in a few weeks.