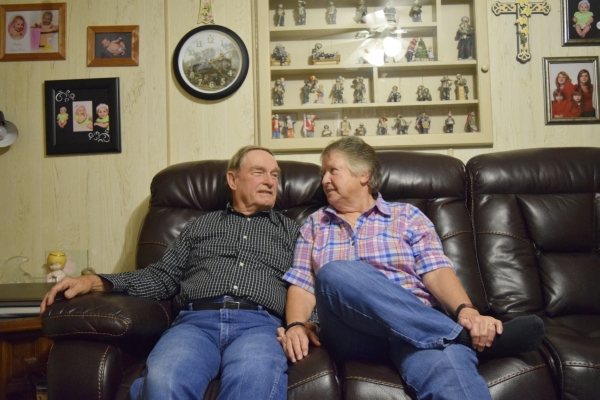 Rebecca Rider/Salisbury Post Specialst E-5 Coy Thompson and wife Jean sit in their home, surrounded by photos of their family.

It’s taken Coy Thompson more than 40 years to get his medals. When he left the dark jungles of Vietnam, no one told him he’d earned the right to prestigious awards like the Purple Heart, the Silver Star or the Air medal. And Thompson says he didn’t ask.

“When I left there, I just didn’t want no more part of it,” he said.

Sunday at 11 a.m. at Enochville Church of God he’ll receive the last of his medals. He’s earned 13 in all, but the last four are the most prestigious—a Silver Star, a Bronze Star, an Air medal, and the Purple Heart. When his doctor at the VA told Thompson he qualified for these, he mentioned that the military doesn’t just give these four away.

“You earn them,” Thompson said.

“Right before Thanksgiving,” His wife, Jean remembers, shaking her head.

She and Thompson were newlyweds at the time. They’d been married 16 months when Thomson left for eight weeks of basic training at Fort Bragg in Fayetteville. From Fayetteville, he was moved to a base in Virginia, where he spent three months learning how to work on a helicopter. Then he was shipped to Saigon, now Ho Chi Minh City.

It was night when Coy saw Vietnam for the first time, he remembers. He says you could look out the windows of the plane towards the ground and everything was lit with bursts and flashes of light.

“Boy, it sure is lightning down there,” Thompson recalls someone saying.

A sergeant on the plane told them it wasn’t lightning. It was bombs.

When they landed, Thompson says they were hurried off the plane and into buses in case the air strip was attacked. From there, they went to Saigon. His year in Vietnam is something that Thompson remembers in bits and pieces. It’s something he speaks about slowly, and no one, not even Jean, knows the whole story.

But he’ll talk about it a bit.

At first, Thompson, now Specialist E-5, was assigned to cleaning up trash in Saigon. Then, he was sent to Tây Ninh, a U.S. combat base, to serve as a helicopter crew chief. Small and isolated, Thompson said it was known as one of the areas with the thickest fighting during the conflict. He learned to cover his wedding band with mud so it wouldn’t gleam and give him away. He learned to lay flat along the top of his helicopter during repairs to make himself a smaller target, and he learned to crawl. Once, he said, a superior officer told him the life expectancy of a Vietnam helicopter crew once they were in the air was 11 seconds.

He has some good memories: receiving packages full of hard candy and crackers from Jean that he’d share around base, accidentally driving into a ditch while ferrying a superior officer and a fellow soldier getting caught on the toilet during a bombing.

But there are the bad ones, too. Thompson said that one of the hardest things was trying to carry wounded men to safety — or having to leave them. Often, they’d get orders to move out of an area quickly, and not everyone made it. Thompson says he can still see the hands reaching up, trying to grab onto the helicopter and just missing.

And Thompson is still, slowly, telling his story. Jean said he just recently told her how he earned his Silver Star, the third highest medal given for valor.

That day, Thompson said, he was out flying when a report came in over the radio that a scouting group was surrounded by the Viet Cong. Thompson’s was the only helicopter in the area, but they were asked to find a safe place to land and wait for backup. The estimated arrival time for the other choppers was three hours. By that time, Thompson and his crew knew the soldiers would likely be dead. Thompson’s superior officer asked him if he was up for a rescue mission — saying that as crew chief, it was his machine and his decision.

They went. Thompson said they were able to rescue 52 men that day, many of them wounded.

“We brought ’em out,” he said, voice full of emotion.

It’s one of his good memories of his time in Vietnam. He remembers the good memories, he said, because there were precious few of them.

In November 1969, Thompson was asked if he’d be willing to serve another term.

“Sir, if I get out of here alive, I don’t want to come back,” Thompson said he told the officer.

He was assigned to spend the final months of his tour at Hunter Air Force Base in Savannah, Georgia, and when the plane left the ground in Saigon, Thompson said, everyone celebrated.

“All of us got up, just hollerin’ and giving high fives.”

But when Thompson landed on American soil, he was faced with other challenges. His plane was met in Oakland, California by protesters. Thompson said a woman called him “baby-killer” and spit on him as he walked off the runway. Thompson suffered from Agent Orange exposure and skin cancer. He has PTSD and has bad flashbacks that made him choose early retirement from UPS.

But good has come of it.

“We’ve had some really wonderful people helping us,” Jean said.

Thompson sought treatment at the W. G. Hefner VA Medical Center in 2000 for his skin and his flashbacks. It was there that he learned he was qualified for medals. Thompson said he was presented with three while he was in Savannah, but wasn’t aware he’d earned others.

Wanting Thompson to get the recognition for his service, Jean and their daughter, Dawn, began cutting through red tape.

“Dawn and I have fought so hard for this,” Jean said.

A lot of service records from Vietnam were lost, Jean explained. Records weren’t always accurate due to battlefield conditions, or were lost when troops pulled out. In 1973, a fire wiped out a huge number of records at the National Personnel Records Center in St. Louis, including Thompson’s. Jean said she was told, more than once, that there wasn’t a record of Thompson, and other family members who served, being in Vietnam.

And Thompson has earned his fair share of good things. When he returned from Savannah, he and Jean settled into a home in Enochville and had two daughters. Now, they have seven grandchildren and even a few great-grandchildren. Thompson says he likes to go to high school football games and local baseball games — though he can’t stand the fireworks. When they watch TV, Jean sits with the remote in case something upsets her husband — but she says that Vietnam made both of them realize the important things in life, and has allowed them to truly treasure their time together and the family they’ve built.

“This made us both better people,” she said.

And Thompson looks after the family, whether it’s babysitting his great-grandchildren or mowing his sister-in-law’s yard.

“Anything the family needs, I’ll do it,” he said.

His tour of duty left scars — some visible, some not — but Thompson says it’s put things into perspective for him, and it’s helped him appreciate the life he has all the more.

Thompson will be pinned with his medals at at 11 a.m. at Enochville Church of God’s Veteran’s Day service Sunday. The church is located at 199 North Enochville Avenue. He will also be presented with a flag signed by the president that was flown over the White House in his honor, and a letter from Rep. Richard Hudson and Sen. Thom Tillis.