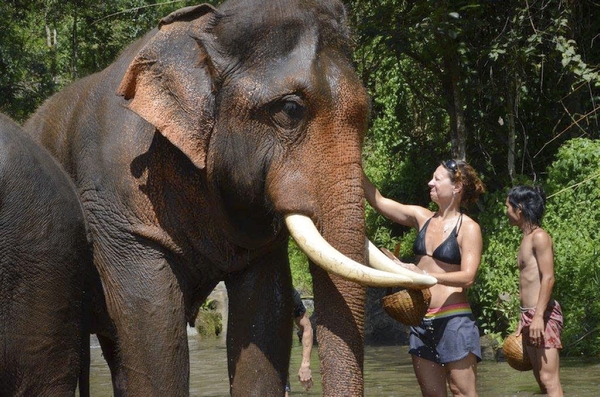 Delaine Fowler and her elephant for the day in Chiang Mai, Thailand. Photo by Alan Fowler Alan Fowler holds a massive leaf while on a run in McRitchie Park,
Singapore. Photo by Delaine Fowler

Alan Fowler wanted to find a place where he could step out the door into paradise. A 26-hour flight through Chicago, on to Hong Kong, and then to Singapore on Oct. 13 took Alan and Delaine Fowler for a two-day visit with friends from home. Their layover in Singapore would set the stage for the final destination of Thailand.

“Singapore was the cleanest city that I have ever seen. There was no trash. The name stands for ‘City in the Garden,’ and all the trees were pruned. No leaves lay underneath them,” said Delaine, owner of Fowler Physical Therapy in Salisbury. Alan, employed with Salisbury Rowan Utilities, was impressed with the size and safety of the city.

The Fowlers, both avid athletes, went running in McRitchie Park, where they saw large amounts of monkeys. The monkeys kept their distance and it was a good thing. Touching a monkey is a $500 fine, the same for spitting or for dropping your gum. Possession of an ounce of marijuana results in death by hanging. Another unusual fact is that toilets are just big holes in the ground.

“You just positioned yourself over them,” Delaine said. “I don’t know what happened down below.”

The Bryan family has been in Singapore for 1½ years so far, where Fred is the international sales manager for Power Curbers. Fred and Sherry feel that their children, Bess and Luke, are safe there, often allowing them to ride the subway in the city of nearly 5 million residents without supervision. Though crime is virtually non-existent, the police and military are less visible than you might expect. Prices are about the same as in the United States and gambling is a big draw for tourists.

“I was surprised to find that the locals can’t gamble but the tourists can,” Delaine said. “The unemployment rate is 2.5 percent, almost everyone has jobs. The literacy rate is 96 percent, and the average monthly wage is $3,000. I am blessed to be an American, but somehow we have lost the idea that educating everyone should not be a dream but a requirement.”

Alan and Delaine found that they liked the national dish of Singapore known as laksa, a coconut milk-based soup with sprouts and noodles. Dragon fruit was another favorite, described as much like kiwi though much bigger and less tart. Teas, especially green tea, were very good as well.

The next stop was Alan’s paradise, Koh Phi Phi Island in the southern part of Thailand.

“All travel was by boat, bikes or motorcycles,” Delaine said. “I never saw a car.”

They stayed at the Laem Tony Resort, home of salty water, beautiful fish, lots of coral and plenty of access for snorkeling.

“We were very secluded, this was not the place for nightlife and meeting lots of new people,” Delaine said. “The seclusion was great to start with, but eventually I would have needed my own boat to go places.”

Alan and Delaine were able to video chat with their sons back home, Brady and Pace. The boys stayed with his parents, Lanny and Jo Fowler, who are also known as Pawpaw and Mimi.

The Fowlers hired a guide for six hours of exploration and snorkeling in Maya Bay. They spent time in the same area where Leonardo DiCaprio filmed “The Beach.” Alan and Delaine both received a high-end traditional Thai massage and found differences from a massage back home. While the massage could last as long as four hours, Delaine said, “Ours took about two hours and we were both fully clothed. The cost was $60 for each.” Later, they found a combined 30-minute pedicure and foot and lower leg massage for $5 each.

Hotel staff was the key to communication during this portion of the trip.

“We had a language barrier with Thai and English. We didn’t know Thai and few people spoke English away from the hotel,” Alan said. “We saw the locals building a boat out of bamboo and had to find someone to tell us what it was for. Later the boat was loaded with flowers and sent out to sea.”

Drinking water was an issue. The Fowlers could not drink the water in Thailand after doing so in Singapore.

“It was not that the water was unsafe but just that we were not used to it,” Delaine said. “We were advised not to drink it.”

The next stop was Chiang Mai in Northern Thailand.

“We had one of the nicest suites in the hotel and got it for Hampton Inn prices,” Alan said. “A very nice room was available for $20. Food was inexpensive.”

A Thai cooking class was first on the agenda. They learned to cook curry dishes and spring rolls, plus mango sticky rice and coconut and banana dishes.

“We picked our own lemongrass, leaves and flowers,” Delaine said. “Locals add chili to many of their dishes, but I found it too hot.”

Religion is practiced openly in Thailand, with about 90 percent being Buddhist, 5 percent Hindu and the other 5 percent including everyone else. The Fowlers learned about “Spirit Houses” where bad spirits are enticed to go and are fed. They also found that contact with the highest monks was thought to provide the best karma. Lesser monks had less karma.

One of the highlights of the trip came in Chiang Mai when Alan and Delaine spent a day at the Patara Elephant Farm.

“We had our own personal elephant that we spent an hour bathing,” said Alan. “The elephants are very tame, allowing us to lie all over them. We found that elephants only sweat at their nail beds and loved to spray us.”

The nonprofit facility rescues elephants from the wild, and they are then rehabilitated and allowed to reproduce before being reintroduced into the wild. Gestation periods for elephants are two years and they nurse their young for four more.

“Lots of women in the group groaned when they heard this,” Delaine said.

The Fowlers rode their elephant, named Pan Ha Lo, for about an hour and then celebrated with a huge feast at the end of the day. They both enjoyed the market areas and the Thai people who seemed to be genuinely happy to have them around. Alan was especially happy to see that prices were so reasonable.

Another highlight was their visit to a silk factory. Alan and Delaine saw all the stages of silkworm harvesting and how the cocoons are turned into threads.

“It takes about 50 cocoons to make a thread,” Delaine said. “We saw how the thread is dyed and then woven by hand. They can be woven by machine, too, which was much like watching an organist using both hands and feet to create something amazing.”

A sales clerk pursued Alan in hopes of making him a custom-tailored suit that would be delivered to his hotel room the next day. Cost of the suit was going to be about $250, much less than the same quality of suit back home. With their departure imminent, Alan didn’t get the suit.

The Fowlers returned home Oct. 24 after 24 hours of flying with a tailwind.

“Alan and I had a great time away together while experiencing new places and cultures. We had fun reconnecting with our friends as well,” Delaine said. “We both missed the boys but knew they were in good hands. I am thankful for my parents in law and the others in the community who supported them while we were away. We look forward to traveling again very soon.”

SALISBURY — Blue is a lot of horse, but he has some pretty big bloodlines to live up to. Owned... read more