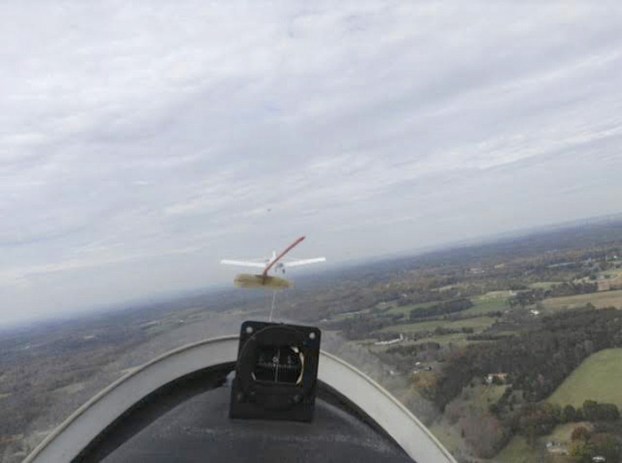 View from the glider cockpit while being towed aloft. Photo by David Freeze Leroy Harris, left, and instructor Charles Cook do a pre-flight check before Harris goes on a training light. Photo by David Freeze

While many of us are intrigued by the opportunity to fly, the process is usually more of a time or financial commitment than we feel comfortable with. Piedmont Soaring Society maintains a glider port on Highway 801, just this side of Farmington, and offers an attractive solution while providing chances for camaraderie and competition, too.

Piedmont Soaring members usually get together on nice weather afternoons and especially on weekends. Currently, the club has about 50 members, two club gliders, a club tow plane and about 16 privately owned gliders. They range in performance and ability, usually measured in a glide ratio that measures the amount that the glider flies forward for the amount that it drops.

While newer gliders are fiberglass, many of the older ones are mostly made of wood. Sleeker and newer models were on hand as well as some that were manufactured in the 1960s. Some gliders, often called sailplanes, are single cockpit, while many have two cockpits with dual controls.

Only a few gliders have an engine, used only for the purpose of reaching the initial altitude. Most gliders don’t have an engine and are towed aloft by the powerful tow plane while connected with a rope. Once the desired altitude is achieved, just a simple pull of a knob releases the rope, and the glider is free to maneuver on its own.

Charles Cook has been flying gliders since the 1980s, having completed over 2,500 flights. He offers lessons on most weekend afternoons. Cook said, “We invite everyone to come over and try it out. You pay $10 for the flight and $37.50 for the tow, then the cost of the instruction is free. Hard to beat that!” Flights are usually limited to an hour but can be extended if no one else is waiting on that particular glider.

Glider pilots try to remain aloft as long as they can and can fly for long distances under the right conditions. Thermals that provide lift often allow pilots to achieve a rapid climb by spiraling upwards. Warm afternoons usually provide the best chance of thermals, and experienced pilots learn how to find them. Cook said, “When we see birds spiraling upwards, we know that we can, too. The record for length of flight is 1,800 miles, with the North Carolina record currently at 220 miles.”

The Federal Aviation Administration provides the guidelines for licensing of glider pilots. “Anything in the air requires FAA tests to be completed. Pilots can solo at age 14, and licensing requires completion of 20 flights over 10 hours. An oral quiz and flight test both are required with a certified instructor,” said Cook.

Tow plane pilot Jerry Munson has provided over 2,000 tows. His plane is just an engine, seat and wings with a lot of power, according to Cook, and was originally used as a crop duster. Munson said, “I love being out here at the field. Everybody jumps in together and helps out. I drive 55 miles from Denver and there is no place that I would rather be.”

While the speed of introductory glider flights averages 40-45 mph, they can go much faster and are very maneuverable. Only a short distance is required to take off or land, and gliders are easily maneuverable on the ground while being towed by a vehicle. Usually weighing in the neighborhood of 600 pounds, they are positioned by balancing and pivoting. Tow plane release altitude is usually 4,000 feet to 5,000 feet.

“Sometimes you don’t make it back to the airfield and have to land out. Glider pilots are always thinking ahead for options. Still, in my 2,500 flights, I have only made an unplanned landing 10 times. We can use other airfields, paved or not. Flying gliders teaches good judgement,” said Cook. “Often flying while in tow is the hardest thing. We use as little as possible control to keep from increasing drag.” If the glider does land and cannot be towed back into the air, then it is disassembled and trailered back to an airfield.

Mooresville resident Leroy Harris is learning to fly gliders after spending some time training for powered flight. Harris said, “Gliders are more fun. There is a lot going on, but it is still more relaxing. I am only limited by time but still never feel rushed.”

Experienced power plane pilot Hugh Honeycutt of China Grove added, “I got a power plane license in 2003 when I retired and then added a sailplane rating in 2008 after joining Piedmont Soaring. Charles was my instructor. I bought my own single-seat, 15-meter-wingspan sailplane.”

Cook invites anyone interested in non-powered flight to come out and visit. He said, “Always call ahead, but we are usually here with prior planning. Flying a glider is very safe, and our instructors don’t charge for their time. We have a great bunch of people out here, and we love to share our love of this sport.”

For more information, call Cook at 828-381-8549 or visit www.piedmontsoaring.net

SALISBURY  — Laurel Street Residential, master developer for the redevelopment of the former Civic Park Apartments, in collaboration with the Salisbury... read more