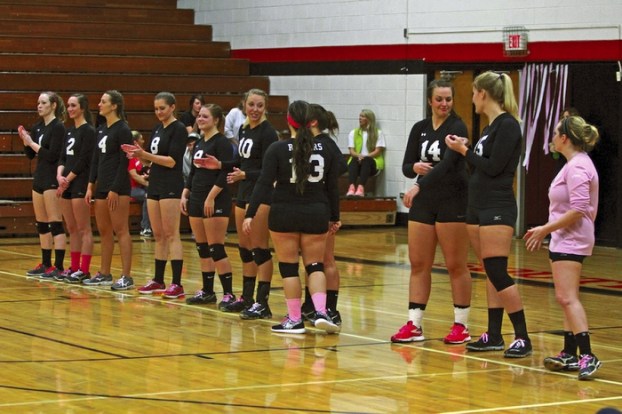 On Wednesday evening, the South Rowan High School gym, was filled with the Lady Raiders Volleyball team and their fans.

This is not an unusual gathering in October but this game was unique in several ways. Instead of its normal red and black, the Raider gym was dominated by pink — pink balloons, pink streamers and large pink ribbons. All of these to raise awareness of the fight against breast cancer.

Something else extraordinary about this event was the opponent that took the court against the Lady Raiders. They were not strangers to this gym. This visiting team spent many, many hours on this hardwood court. Unlike the current players, their sweat was poured out here years ago. The foes on this night were comprised of South Rowan volleyball alumni. These players mostly represented the 2009 team that was the “Best Volleyball Team in SRHS History.” That team won 20 games and made it to the third round of the state playoffs.

Kayla Morrow (2010), who organized the event, is a current coach at South. She was one of the dominant players of the 2009 team and went on to a successful career at Lenoir-Rhyne University. Taylor May Welch (2009) was a basketball standout at Catawba and Katie Wise (2008) was a hoop player at UNC-Asheville.

Jan Dowling, who coached all the alumni during high school, was asked to serve as coach at the event. Taylor Lookabill Owen (2010), another major contributor was assistant coach, as she was unable to play due to expecting a baby boy in December.

Although the alumni team won the match, the real winner was raising awareness of Breast Cancer and the $520 donated to help fight this horrible disease.