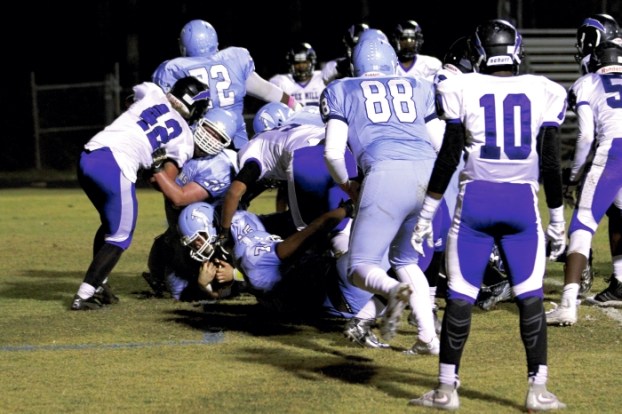 With the help of his O line, West Rowan’s #15 Kacey Otto pushes into the end zone for a TD. Photo by James Sipes, for the Salisbury Post.

MOUNT ULLA — Wearing his standard No. 5 jersey, West Rowan receiver Kortez Weeks caught a touchdown pass from Kacey Otto, and then he caught a TD pass from Bryant Young wearing No. 18.
“My jersey was soaking wet and the coaches didn’t want me to get sick, so I changed jerseys at halftime,” Weeks explained.
While Weeks needed to change, West Rowan’s defense never had to change anything. It was close to perfect in a 41-0 South Piedmont Conference victory against Cox Mill (2-8, 2-6) that kept the Falcons (8-2, 7-1) in the hunt for a share of the league title.
“We played 48 fantastic minutes of defense,” West coach Joe Nixon said. “Very pleased with the effort and very happy for our kids. They bounced back strong from a tough loss (to Concord) last week.”
Cox Mill had negative rushing yards at halftime and never generated any offense to speak of.
“West’s defense is impressive,” Cox Mill coach Craig Stewart said. “We just couldn’t move their big guys upfront at all. Their corners can cover and that makes it tough. It gives them a chance to do a lot of things inside.”
West Rowan’s defense logged its first shutout since a 13-0 win against Northwest Cabarrus early last season.
“We finally got a goose egg,” cornerback J.T. Sanders said. “It feels good. We worked for it.”
Ironically, the defensive gameplan West had worked on all week focused on containing Cox Mill’s tall, athletic receiver Jonathan Earl.
And then Earl hobbled into the stadium on crutches.
“When we realized he wasn’t playing we didn’t know what to do for a minute,” Sanders said. “But we just switched the things we’d worked on to one of their other receivers. We stuck with the gameplan as much as we could.”
Cox Mill’s defensive front, led by track and field thrower Tommy Dawkins Jr., made it challenging for the Falcons to run the ball and kept the Chargers in the game a long time.
After eight scoreless minutes, West converted a third-and-22 play with a 48-yard pass from Kacey Otto to Juwan Houston. That led to a 1-yard dive by Otto for a 7-0 lead.
Both defenses dug in during the second quarter and it appeared 7-0 would be the halftime score. But then a 56-yard punt by Otto to the Cox Mill 2 changed field position. Cox Mill couldn’t move the ball, and after a scintillating punt return by Houston, West started on the Cox Mill 31.
With 55 seconds left in the half, Otto tossed a 21-yard strike to Weeks heading for the right corner of the end zone for a 14-0 lead. That was the touchdown that changed everything.
“Down 7-0 and getting the ball to start the second half, we felt like we still had a good chance because all it takes is for one ball to roll your way,” Stewart said. “But when you’re looking at 14-0, the way their defense was playing, that touchdown before the half took a lot out of us.”
After that hard-nosed first half, it was stunning how quickly Cox Mill was knocked out in the second half.
On the first possession of the second half, Cox Mill went to the air — and West linebacker L.J. Robinson went to the house with a pick-six.
“Our linebacker on the other side had blitzed, so I was just trying to cover for him,” Robinson said. “I saw the quarterback (Matt Alderfer) rolling out, and then I saw the ball coming my way. Then I got some good blocks.”
That made it 21-0, and Cox Mill was reeling.
Then Cox Mill got buried at its 9-yard line on a kickoff return and was forced to punt from the 5.
West’s Rodney Howell blocked the punt, Sanders scooped it, and the Falcons led 27-0.
The Falcons had scored two touchdowns without their offense even taking the field.
“Special teams were very big for us,” Nixon said. “They gave us field position all night.”
After West scored its third TD of the third quarter on Young’s 10-yard pass to Weeks on a slant, Austin Morrison’s PAT made it 34-0, and everyone was ready to go home.
“We got a lot of momentum at the end of the first half and we played a lot better in the second half,” Weeks said.
Shamari Evans broke a 38-yard scoring run in the fourth quarter for West’s final touchdown.
Malcolm Ingram had an interception that helped preserve the shutout, and the Falcons beat Cox Mill for the first time in three tries.
While West played almost flawlessly on defense and special teams, it turned into a blowout because the Chargers are banged up with injuries. Slotback Devin Cobb is out, as well as Earl.
“It’s been one of those crazy years where we get one kid back from injury and then we lose two more,” Stewart said.

By Mike London mike.london@salisburypost.com CHINA GROVE — It was a sweep, but at the same time, it was a cliff-hanger. Host... read more