North Rowan puts it all together, destroys East Davidson 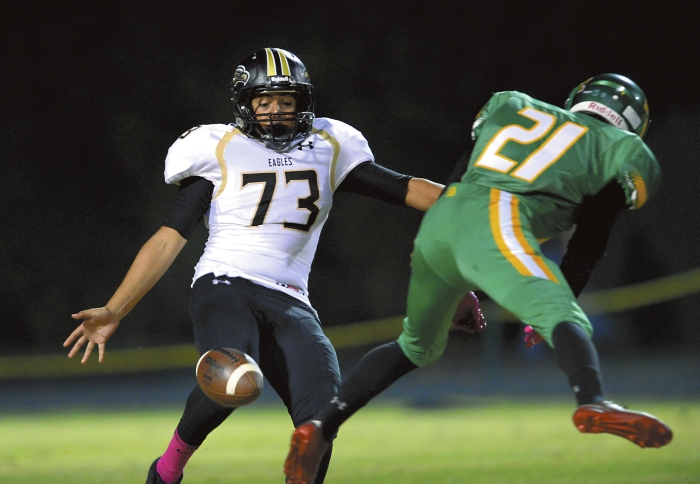 You may have to call it a tie, trying to decide whether North’s offense or defense was the more dominant unit.

Sophomore quarterback Josh Ellis threw four touchdown passes in the first half and the Cavaliers’ defense smothered the Golden Eagles from the onset. The score was 41-0 at halftime and as soon as North scored in the third period, the running clock rule kicked in and mercifully ended the East Davidson nightmare.

“We’ve preached to our guys all year, take care of the football and execute and the potential we have is unlimited,” said North head coach Ben Hampton. “But we haven’t arrived by any means. We have to come back to work on Monday and get ready for a tough Thomasville team. I actually think East Davidson is a tough opponent as well but we just clicked tonight and did everything right.”

Almost. North did have nine penalties for 100 yards, 60 of which came on defensive flags. But with a commanding lead, the penalties didn’t hurt the Cavaliers like they could have in a close game.

“Most defensive penalties, I attribute to guys just playing hard,” said Hampton. “You’re going to get some bumps and rubs and a pass interference from time to time because usually that’s a judgement call by the officials. But we do want to clean the penalties up before next week.”

Even though North didn’t score its first touchdown until 4:35 remained in the first quarter, the Cavaliers’ defense choked down East’s offense early and often. North just looked like the better team early and it was just a matter of time before the scoring would begin.

Ellis connected with wide-open receiver Trey Stoner on a 35-yard scoring pass for that first TD, which was set up by the defense. The scoring play came on the first play after North’s Jaylen Brown intercepted a Nick Tobin pass.

Tobin had a rough night, hurried on almost every play, leading to five interceptions. Zion DeBose, Matthew Hoosier, Steve Thurston and others provided the pressure on Tobin.

In the second quarter, North had bookend 21-yard touchdown passes from Ellis to receiver A.J. Shields. In between, there was a 39-yard scoring strike from Ellis to Desmond Gray and TD runs from Jaleel Webster (14 yards) and Jayden Jones (four yards).

At halftime, North had 308 totals yards to just 45 for the Eagles. East had just two first downs at that point and one of those came on a penalty by North.

East tried an onside kick to begin the second half, but it failed and gave North a short field. The Cavs then went on a 51-yard, 10-play (all runs) drive to ended with a 12-yard scoring burst from Jones. Kicker Jacob Young’s PAT made it 48-0 with 7:35 remaining.

In the final period, an interception by North’s Omar Lipscomb led to a 41-yard field goal from Young and the Cavaliers put a bow on the win with 8:28 left on a 10-yard scoring run from Webster.

“Based on their defense, the pre-snap reads, I saw the safeties spread out, so I knew the passing game would be open,” said Ellis afterwards. “And once the passing game got going, the running game worked for us. I got into a rhythm and we just tried to keep it rolling.

“I knew it was possible to score like this because we have the team to do it,” continued Ellis. “If we come out here and do what we’re supposed to do, this is what can happen.”

North churned out 226 yards on the ground, led by 58 yards each from Webster and Xavier Haley. Jones ran for 50 yards and Desmond Gray picked up 35 on just three end sweeps.

“Without a doubt, Josh (Ellis) played a great game,” said Hampton. “He kind of showed tonight the capability that we knew he had. He settled in and had some big completions early that really helped his confidence.”

For the game, the stingy North defense allowed the Eagles just 98 total yards, the second straight week that the opponent fell short of 100.

In addition to Brown and Lipscomb, Keith Carroll, Chris Clodfelter and Malik Alford had interceptions for North.