Thanks go both ways at Community Care Clinic event 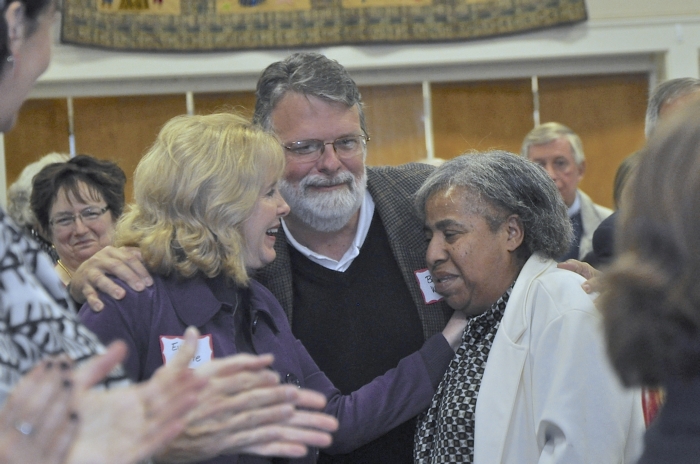 Eva White, left, and Tillie Jackson, with Eva’s husband Ben, were surprised to receive the Volunteer of the Year award from the Community Care Clinic. The duo cleans the clinic twice a month, saving on cleaning fees. Susan Shinn/For the Salisbury Post

If an organization could guarantee a 750 percent return on your investment, would you put your money there?

Of course you would.

For every dollar its donors gave, the Community Care Clinic in 2014 provided $7.50 in services — medical care, dental care and prescriptions to Rowan County adults who are uninsured or underinsured.

Longtime supporters Ralph Ketner, Fred Stanback and Paul Fisher all pointed out that such a return is unprecedented.

“It is unheard of anywhere,” Fisher said, following the clinic’s annual Community Thanks event at First United Methodist Church. “What a well run organization whose great work and that of its staff is multiplied by the efforts of volunteers, and what a great community investment.”

About 150 donors, staff, community partners and volunteers gathered for a delicious meal catered by Debbie Suggs, who received the organization’s Silent Angel of the Year award, named for Fred and Alice Stanback. Suggs has long provided hot meals for the clinic’s Tuesday night volunteers.

Eva White and Tillie Jackson shared the Mike Fuller Volunteer of the Year Award. Fuller was recognized as volunteer of the year by the North Carolina Association of Free Clinics. Mark Scheerer, the association’s deputy director, was on hand to present the award.

Krista Woolly, the clinic’s executive director, praised Fuller’s efforts, despite his giving her the stink eye during her presentation.

Fuller co-founded the clinic’s pharmacy is 1996, and continues to volunteer there.

Woolly said he provided “quiet, compassionate, dedicated service to all citizens. His involvement in the Missions of Mercy dental clinic is unparalleled.”

Fuller pronounced himself “shocked” by the honor.

“The Community Care Clinic has given me an opportunity to serve people a little less fortunate than I am, and I’m happy to do it,” he said.

Woolly also made a point to note that the entire evening was paid for by donors — First Methodist provided the space, the Pink Peony provided the centerpieces, Koco Java provided the coffee, and Novant Health Rowan Medical Center and F&M underwrote the meal.

Pastor Mark Conforti, First Methodist’s senior pastor, said that the event represented a group “of like-minded people who want to see the Community Care Clinic continue to thrive in such a vibrant way. This is a celebration of a great year.”

Along with these services, the clinic also provides education for its clients, including the Freedom from Smoking program, which has seen a success rate of 50 percent with its third class — well ahead of the national average, Woolly said.

Sharon Gross was a member of the clinic’s first smoking cessation class, and is still a quitter, Woolly said Wednesday.

“I could not have done it without the support I have received from the clinic and continue to get,” Gross said.

Woolly explained that the clinic strives to practice relational medicine — developing relationships with clients — not simply just providing a service.

“We like to have relationships with our patients,” she said, “and that’s why we’ve been successful.”

White and Jackson were surprised by their award.

Nancy Shirley, who photographed the event, said of her good friend: “Eva has a servant’s heart and volunteers in several places. We call her our guardian angel because she is always watching over us. She does hospital visits and lends an ear when you need one.”

Jackson is a longtime employee of Novant Health Rowan Medical Center who rarely misses a shift, Wooly said. Her supervisor calls her “the most caring individual I’ve ever met. She always has a smile on her face.”

White and Jackson, who has received services from the clinic, offered to clean the clinic twice a month, thus saving on cleaning service fees.

“I’m really good at cleaning,” Jackson told Woolly. “I do it all day long.”

So twice a month, this dynamic duo cleans the clinic from top to bottom, Woolly said. “They always ask what else they can do to help us.”

“Tillie is the superhero,” White told the crowd. “I’m just her sidekick.”

White said that the clinic helps so many people and changes lives. “God has truly blessed this community with a group of loving and caring people.”

Woolly said that for the third year, a representative from the Affordable Health Care program will be on hand beginning in November to help patients enroll in the federal insurance program.

“In 2014, we had 30 patients get insurance for the first time ever,” she said. “Of course, we still have 1,200 patients, and that’s the reason our clinic is necessary and vital in improving our community.”

Along with the Missions of Mercy free dental clinic, which has been to Rowan County twice now, the clinic partners with Prevent Blindness North Carolina, Rowan Helping Ministries, and Bridges Out of Poverty. The staff also recently converted to electronic records to communicate more effectively with other health care providers.

“We appreciate you every day, not just once a year,” Dr. Frank Eason told volunteers. He serves as vice president for the clinic’s board of directors. “We see working poor throughout the community, and giving to the Community Care Clinic is just the right thing to do.”