Mom brought back from coma after hearing newborn’s cries 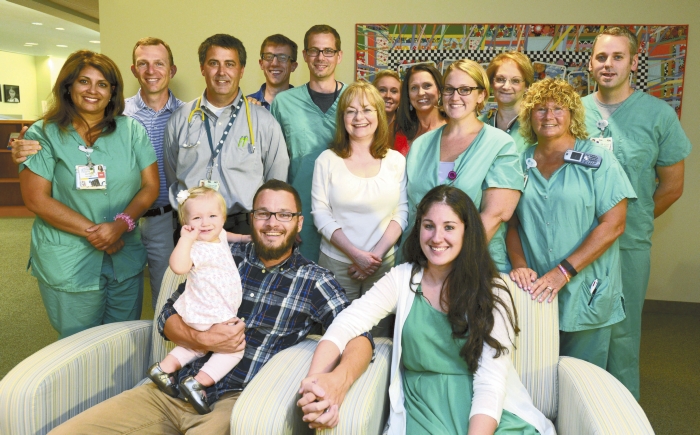 Even though none of the doctors said it, Jeremy Cawley knew that they had brought him into his wife’s hospital room to give him a chance to say goodbye. Shelly was not doing well and there was only one more thing to try.

“The doctor said, ‘Let’s get the baby undressed and put her on her mother,’” said Jeremy. “We had to work hard to get Rylan to cry, but she did.” Shortly after, Shelly’s vitals improved enough to prepare her for transport to Carolinas Medical Center.

On Sept. 5, Shelly Cawley, 23, a nursing student at Cabarrus College, went to Carolinas HealthCare System NorthEast to deliver her first child. Shelly had a blood clot in her leg, which had been treated throughout her pregnancy and the soon-to-be parents did not expect it to interfere with a normal labor and delivery. During the course of her labor, though, she developed life-threatening complications, including preeclampsia and HELLP Syndrome, which required an emergency c-section.

After the c-section, Shelly’s lungs rapidly filled with fluid, and her health went downhill fast. She ended up on an oscillator, a special ventilator only used when regular ventilators are not sufficient. But even that was not working.

“We needed her vitals to be stronger so that she could survive being switched to the portable ECMO lung transplant system that we were bringing up from CMC,” said Dr. Dana Bush, the obstetrician involved in Shelly’s care. “The mother-child bond is incredibly strong. I thought it might make a difference if Shelly’s subconscious could hear and feel her daughter.”

When it worked, Jeremy knew that his daughter had saved her mother’s life. He also credits the coordinated care provided by Carolinas HealthCare System.

Shelly was transferred to CMC and placed on Extracorporeal Membrane Oxygenation — ECMO — until her lungs recovered enough that she could breathe on her own. ECMO is a procedure that uses a machine to take over the work of the lungs and sometimes the heart. It is only used with patients that have not responded to other treatments.

“I never really understood how important that connection (between CMC-NorthEast and CMC) was until now,” Jeremy said. “The fact that the hospitals are even connected now gave us options we wouldn’t have had otherwise.”

After Shelly was breathing on her own again, she returned to Concord for rehabilitation at Carolinas Rehabilitation-Northeast, a 40-bed inpatient rehabilitation hospital that opened in 2013.

Because she was so close to home, her family could bring her baby daughter to visit throughout the day. Shelly’s friends came to visit, play games with her and help with her rehabilitation.

“The medical teams at CMC-NorthEast and Carolinas Medical Center saved Shelly’s life,” Jeremy said. “One of our goals as we continue our recovery process is to draw attention to the amazing medical system that we have in our community.”