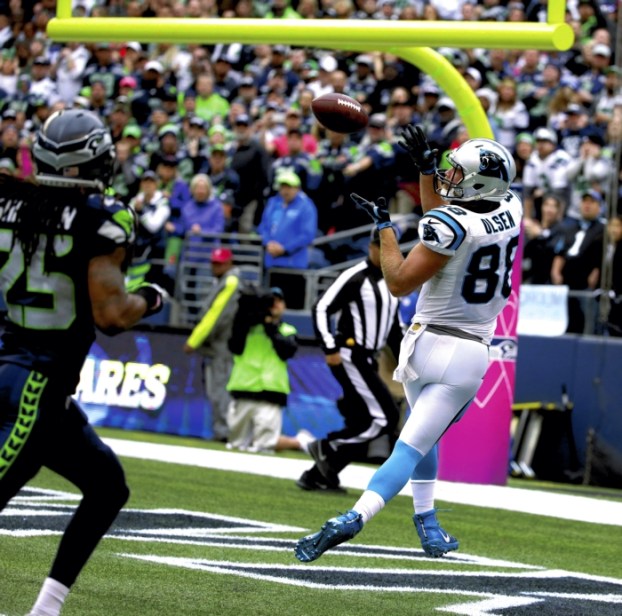 SEATTLE (AP) — Some late heroics from Cam Newton showed that the Carolina Panthers being unbeaten is no fluke.

Winning on the home field of the two-time NFC champions sure proved it.

Newton threw a 26-yard touchdown pass to Greg Olsen with 32 seconds left and the Panthers moved to 5-0, rallying for a stunning 27-23 win over the Seattle Seahawks on Sunday.

Newton led the Panthers to touchdowns on their final two possessions after trailing 23-14, the second straight week the Seahawks collapsed in the fourth quarter. Newton found Olsen wide open down the seam as All-Pros Earl Thomas and Richard Sherman looked at each other in confusion.

Newton was 12 of 15 for 169 yards in the fourth quarter and threw for 269 yards overall. He led the Panthers on a pair of 80-yard touchdown drives in the final period.

The Panthers improved to 5-0 for the second time in franchise history.

It was the second straight week the Seahawks (2-4) suffered a late defensive meltdown.

Russell Wilson threw for 239 yards and found Jimmy Graham eight times for 140 yards, but the Seahawks lost at home for just the second time in the past two seasons.

Carolina was unbeaten but unproven, with victories over lesser competition. A win in Seattle immediately added validity to the strong start.

An early wake-up call certain didn’t help Carolina’s cause. A fire alarm was pulled in the Panthers’ hotel around 5:40 a.m. PDT on Sunday morning, causing the players and staff to briefly evacuate some 7 ½ hours before kickoff.

Carolina trailed 20-7 midway through the third quarter and by nine with less than 12 minutes remaining. But Newton overcame a poor first half and two interceptions to lead the late rally.

Seattle got one big play with Wilson finding Graham for 20 yards, but the drive stalled. After using two timeouts, the Panthers got the ball at their 20 with 2:20 remaining.

Newton completed two quick passes and at the two-minute warning the Panthers were at their 46. He hit Ed Dickson to the Seattle 40 before but Bruce Irvin sacked Newton back near midfield, forcing them to use their final timeout with 1:20 remaining.

Newton rebounded to hit Devin Funchess for 16 yards, Jerricho Cotchery caught a contested 7-yard pass, and after spiking the ball and moving quickly to the line, Newton saw the confusion in Seattle’s secondary, hitting Olsen for the winning score.

It was the second straight week Seattle was burned by tight ends; Tyler Eifert had two touchdown catches for Cincinnati.

Seattle looked fine through three quarters with Wilson and Graham connecting and the defense holding Newton under control — aside from one long touchdown drive in the first half. Seattle took a 17-7 lead when Wilson hit Ricardo Lockette for a 40-yard TD on a double pass.

Marshawn Lynch returned after missing the previous 2 ½ games because of a hamstring injury, but the Seahawks continued to struggle getting Lynch loose. Lynch finished with 54 yards on 17 carries and a touchdown, while rookie Thomas Rawls, who ran for 169 yards last week against Cincinnati, had one carry for 8 yards.