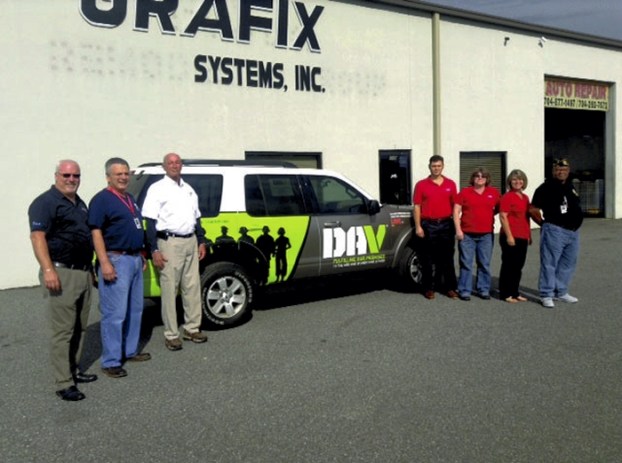 Finally ready to roll, veterans to benefit from DAV vehicle

Lene’t Adams wanted to find a way to help the veterans at the VA Hospital in Salisbury. Otto Borden, Disabled American Veterans Adjutant, knew just what they needed. Both achieved their goals on Friday morning when Borden picked up a specially labeled Ford Explorer from Grafix Systems, Inc. in Concord.

Adams, who works in the survey department for Lane Construction Corporation and is a member of the Community Service Committee, found out that the veterans who had appointments often didn’t have a way to reach the hospital. She talked with Borden about Lane Corporation’s desire to help. Adams said, “I just asked if there was something that we could do. When I understood their need, I decided that I was going to get them a vehicle, one way or another.”

Borden’s DAV group was willing to help get the veterans without transportation to their appointments if they could just get the vehicle to do it. Adams and Borden knew that there were likely lots of hurdles but the end result would be worth the effort.

Adams found a Ford Explorer that was about to come off Lane’s lease in Virginia. The committee asked if the company could donate it to DAV. Reba Stewart, office manager for Lane in Charlotte and another member of the committee, said, “We eventually made a visit to the VA in Salisbury. We are tasked with reaching out to the community, making suggestions and voting on projects. We were so excited about this particular project!”

The Explorer had been leased through Emkay, Inc. Marcus Hackler, Environmental Coordinator at Lane and chairman of the committee said, “We are a heavy highway and bridge construction company. Our market is the east coast, from Maine to Florida and also Texas. We employ about 4,500 people and are headquartered in Cheshire, Connecticut. We take pride in community service and are often in the public eye.” Lane is privately owned and has recently celebrated its 125th anniversary.

Adams was first given a cost for the vehicle once the lease was completed that caused some concern. Eventually an agreement was reached with Emkay to allow the vehicle to be donated to the DAV, Salisbury Chapter 96.

Now with the vehicle in hand, Adams and Borden had more work to do. They wanted the Explorer to carry the DAV logos and set out to find the proper wrapping to do this. Instead of painting the vehicle, a cosmetic 3M wrapping would distinguish the vehicle clearly as belonging to the DAV.

By means of a raffle, the DAV, with the help of Lane employees, began to raise money to purchase the wrap. Their efforts, along with a significant donation from Salisbury Rowan Runners, acquired the wrap, leaving one more major step to complete.

Adams called Grafix Systems in Concord to inquire about the cost of applying the wrap to the vehicle. Grafix Systems, Inc. is a nationally recognized company that applies wrapping to vehicles, some as famous as President Bush’s buses and NASCAR cars and haulers. Bobby Correll, office manager, took the call from Adams and was immediately interested in helping. He said, “I knew that I had to ask ‘Odie,’ but I was pretty sure that he would say that we would not charge to wrap the vehicle.” Odie is Grafix President James Wilson.

Wilson and Correll both have a soft spot for veterans. Wilson said, “There have been military members of my family at least back to the early 1800s, probably into the 1700s. My grandfather was a member of DAV and my dad also served in the military.” Borden and Adams found out that the wrapping would be done for free.

Grafix staff members, including Wilson himself, took special care to do the DAV vehicle right. Correll said, “We took 10 hours to wrap it. We wanted the job to turn out perfect.”

The large crowd on hand at Grafix Systems to see the vehicle for the first time included Adams, Hackler and Stewart from Lane, Correll and Wilson from Grafix, and Borden and Mike Selitto from DAV. Selitto will be one of the drivers who will transport the veterans to their VA appointments.

Adams said, “Now that we got this done, we want to see if we can do this again with another vehicle. We are also looking for a wheelchair ramp for the vehicle that Otto picked up today. This has been a journey, but it has been worth every bit of the frustration along the way. Now the veterans can get to the Salisbury VA just like they do at their other facilities.”

Two men were shot on North Shaver Street after fighting a couple who tried to steal their beer Friday night, according to... read more