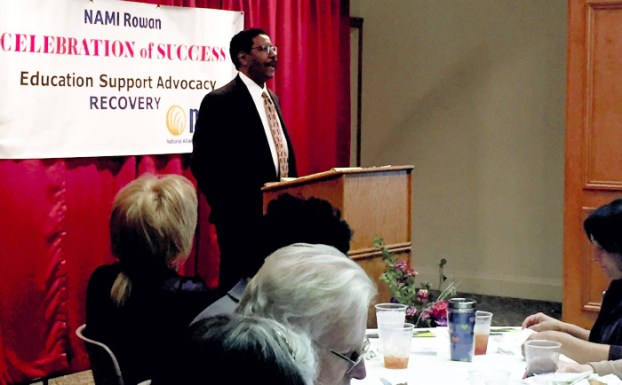 Nothing, not even mental illness, can stop a person from succeeding in life, according to the keynote speaker at Thursday’s Success Luncheon.

The National Alliance on Mental Illness of Rowan County hosted a Celebration of Success Luncheon at the Rowan Public Library.

There were also awards presented to employees who were outstanding in their field.

Keynote Speaker Charles Sheelor, a veteran, former police officer and pastor, talked to the attendees about celebrating their accomplishments. He also told the crowd that they could do anything they set their minds to, mental illness or not.

“I’m here to tell you, you can do anything and be exactly what you want to be if you’re willing to put in the work,” Sheelor said.

Peggy Mangold, president of the NAMI Rowan Board, said events like the luncheon are important for eliminating the stigma around mental illness.

“They just don’t want to talk about (mental illness),” Mangold said, “but we need to bring it out and we need to have more funding.”

According to the NAMI website, NAMI is the nation’s largest grassroots organization focused on improving the lives of those suffering from mental illnesses. The organization works as an advocacy group for mental illness and provides education to communities across the country.

Recipients were allowed to say a few words as they accepted their awards.

Winner Barbara Valentine from Carter House read a poem called “Get it All Out,” in which she urged those who are suffering from mental illness to talk to someone.

Winner Timothy Demers from Daymark Recovery talked about his recovery from a traumatic brain injury. He said he is learning to deal with his fear and anxiety. For example, he said he often feels like a piano could crush him at any moment.

“If a piano falls on me, I’m going to stay alive long enough to play it,” he said.

After awards were presented, there was a silent auction featuring the work of Dennis Mial.

Mangold said it is good for people suffering from mental illnesses to celebrate their success.

“It’s nice to celebrate people who have made strides in their mental illness,” Mangold said.

Those who won awards for outstanding work in their field were:

RALEIGH — In a first-of-its-kind decision, the state removed Mac Butner from the Rowan County Board of Elections Thursday because... read more