Hal Sutton: on road to recovery, and soon, on his way home 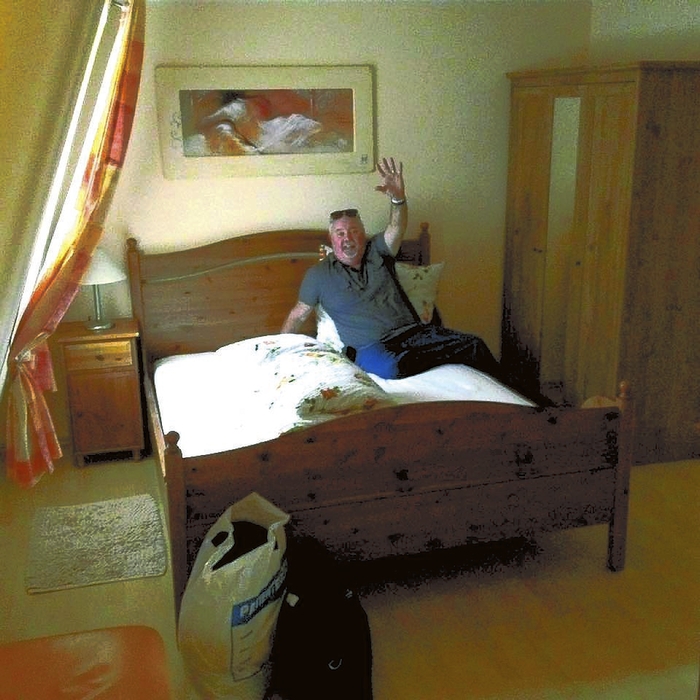 From the other end of the telephone line in Bamberg, Germany, Hal Sutton sounds great, like a million dollars.

The Rockwell man has one of those booming voices that fill a room. He likes to laugh and give himself a hard time. He says he and his soldier son, Nathan, were like “two monkeys and a squirrel” trying to put his compression hose on the other day.

It was even funnier when he heard himself shouting proudly later in the week, “Nathan, I got my hose on all by myself!”

You might remember from a story last week that Hal Sutton suffered a heart attack Sept. 30 while doing some sightseeing in Bamberg, where he had joined up with Nathan, an Army sergeant on leave from Kuwait. It was supposed to be a guys’ vacation — Nathan had brought an Army pal with him — and Hal’s wife, Karen, stayed back home.

But by Oct. 1, Hal Sutton was admitted into intensive care in a Bamberg medical center with his heart attack and blood clots in his lungs and legs. He stayed in ICU for four days and was only released from the hospital Monday, but he has still been required to report to the medical center each day as an outpatient.

Granted emergency leave from the Army, Nathan Sutton has been staying in a rented apartment with his father. It’s Nathan’s daily job to inject blood thinners into his father’s stomach. Hal laughs that it’s about as awkward a scene as the compression hose debacle.

In all, Hal is taking 10 different medications and still trying to find the right combination on his blood thinners. He’s on a strict diet, and he has been able to manage the 42 steps up to their fourth-floor apartment and their walks to the bus stop and around the hospital.

But beyond all the immediate work at getting Hal on the road to recovery was a more difficult question of how to get him on the road home. Doctors told him from the start he could not risk flying in his condition. The pressurized cabin could prove deadly.

So after freighters were ruled out because they didn’t have doctors on board, the best option became an expensive ferry home on the Queen Mary 2 luxury liner, which will leave Hamburg, Germany, next Tuesday and eventually arrive in New York City Oct. 29.

“I can’t believe I used to work for an airline and we’re going back 100 years in time to travel,” Hal says.

As it stands now, Hal expects to receive his final medical clearance to leave Bamberg Friday. He and Nathan will take a train to Frankfurt, where they will meet Karen Sutton at the airport on either Sunday or Monday, depending on the flight she is able to get out of the States.

At the airport, it will be kind of a handing off of Hal from Nathan to Karen.

“She has already told me she’s going to straighten me out,” Hal says.

Nathan Sutton will then take the next available flight to Istanbul, Turkey, on his way back to Kuwait.

“I give that boy credit,” Hal says. “He has just been a godsend.”

For now, Hal wants he and Karen to take an Amtrak train home from New York and arrive back in Salisbury on the morning of Oct. 31.

Hal’s other son, Jason, wants to meet them in New York and drive them home, but Hal has been making the argument the train would allow him to get up and walk, which he has to do with the clotting concerns.

Besides, Hal says, Jason has a demanding job and three children, including a baby, who need his attention more than Hal does.

Hal Sutton, 58, can’t say enough about the care he received in Bamburg and he credits the doctors and nurses there for saving his life. “Their health care is impeccable,” he adds. “… I feel good. The stent is very successful. My oxygen levels are up.”

The troublesome part has been getting the blood thinners right. Hal compares it to the oil viscosity in a car. Once the doctors get the viscosity in his blood at the desired levels, Hal says he’s good to go, though that will all have to be rechecked and worked out again with his physicians back home.

Hal’s spirits are good and his always-curious nature has not wavered. He marvels at the efficiency of German homes  — how the lights in the hall or the vents in the bathroom will turn off on their own after 5 minutes, how the toilets have no floats or handles, how cabinets for shoes are placed right inside the doorways and how dependable room radiators are.

The heart attack has definitely been a different experience for Sutton, who always has been active. Over the years, Hal has had knees and shoulders replaced, thanks to pastimes such as skiing and motorcycle riding.

Since the Post’s earlier story, many people have contributed toward a Go Fund Me website set up on Hal and Karen Sutton’s behalf to help with their travel expenses. Pinnacle Orthopaedics, Karen’s employer, also will be granting her family medical leave so she can fetch Hal and bring him back on the ship.

“We have just been treated so well — above and beyond the call of duty,” says Hal, who once had an insulation and construction business and is a retired customer service representative for U.S. Airways. “We’re thankful for everything.’

Hal has asked Karen to pick up a couple of books for him to read on the long voyage back. He is certain he’ll be doing more reading than eating from the rich buffets on the Queen Mary 2.

“I said, ‘Get me some books, because we’re going to be like this old couple under the blankets on the deck,” Hal says.

The Go Fund Me site accepting contributions toward the Suttons’ travel expenses is located at www.gofundme.com/z65w34rw.