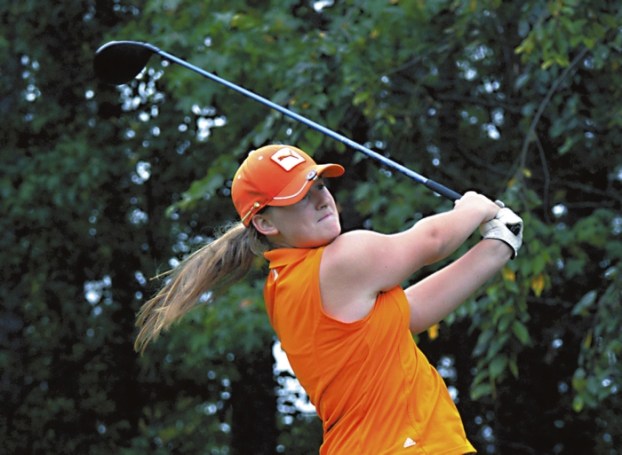 CHINA GROVE — Carson High School junior Micah Furr’s surge continued on Tuesday.
She shot a career-best 76 at Warrior Golf Club to win the South Piedmont Conference tournament by seven strokes and came from behind on the final day to earn SPC Player of the Year honors.
“She’s the first individual golf champion we’ve ever had at Carson,” coach Ryan Chandler said. “Girls or boys.”
It was a meaningful victory because Cox Mill’s Jaime Cassell, the runner-up to Furr for season honors, finished fifth in the 3A State Championships last season. Cassell had a four-shot lead on Furr after a series of nine-hole matches, leading up to Tuesday’s 18-hole finale. Cassell, a senior, shot 83 on Tuesday.
Furr’s 5-over round included three birdies, nine pars, four bogeys and two double bogeys.
The trio of Furr, Cassell and Hickory Ridge’s Maddison Hayes began on the par-3 No. 8 hole.
“I bogeyed my first hole, but I was playing better by the time we got to No. 10,” Furr said. “I had a nice drive and a good chip and made a birdie.”
Furr said her strongest hole was the par-5 No. 17. She missed an eagle there by inches.
“I hit a 3-wood drive that was good and I chipped close enough to have a chance for the eagle,” Furr said. “It was a long putt, but I would have made it if not for one blade of grass.”
Furr said the course was in great shape, but with greens cut short and faster than usual.
Furr’s only regret was a potential birdie that turned into a bogey and turned a possible 74 into 76. She missed a 5-footer for birdie, than missed the 2-foot par putt coming back.
Furr was crushing the ball off the tee last season, but shortcomings in her short game kept her from competing with the county and conference’s top players. Furr still hasn’t reached her ceiling, but she’s fixed a lot of her approach-shot issues.
“She practices hard and she practices constantly,” Chandler said. “I know she’s practiced several times on the back nine here recently. She was very determined to do well today.”
Furr made all-conference in 2014, but she wasn’t thrilled with the 88 she shot at Corbin Hills in the climactic match.
“I played a whole lot better than that today,” Furr said. “It feels good to do better and this game is so much fun when you’re doing well.”
Carson finished second in the team standings, as Cox Mill topped Carson for the team title by 13 strokes. Concord placed third.
Hannah Cargill shot 101 for the Cougars, while Adison Collins shot 102.
Cox Mill freshman Jaidan Rubinstein shot 82. She was runner-up Tuesday and placed third behind Furr and Cassell for the season.
South Rowan’s Lea Morris (98) and West Rowan’s Ella Ferguson (100) were among the top finishers on Tuesday. Morris, Collins and East Rowan’s Camryn Corriher made all-conference based on their total score for the season.
SPC teams will compete in the Central Regional Tournament on Monday at Greensboro National Golf Club.
•••
SALISBURY — West Davidson unseated Salisbury as champion in the 2A Central Carolina Conference, although Salisbury senior Grace Yatawara defended her individual title with 1-over 73 at Corbin Hills.
Yatawara won Tuesday’s conference tournament by nine strokes.
Yatawara, the individual defending state champ for 1A/2A, led by three shots over West Davidson’s Rachael Mast entering Tuesday’s 18-hole finale.
She settled the title shortly after she started on No. 4.
“Birdie, birdie, birdie on those first three holes,” the East Carolina commitment said. “I was thinking, ‘Oh, it’s going to be a great round.’ But it turned out to be only a pretty good day.”
Yatawara practiced on the back nine on Sunday and the front nine on Monday and was confident she could shoot a strong round.
“I wanted to be aggressive, but I didn’t want to be so aggressive that I got myself into trouble,” Yatawara said. “But then I got into trouble anyway.”
Yatawara got into all sorts of misadventures on No. 12. She drove right, lost a ball and had a shot strike a tree limb. That’s more adversity than she usually encounters in a month.
Yatawara also had a double bogey on No. 16, but that was due to a run-of-mill three-putt.
“The best thing about the round was that I kept myself together after that triple,” Yatawara said. “The next three holes after that I had putts for birdies, and I made one of them. Even though I had that one really bad hole, I knew I was still playing OK.”
In addition to the double and triple bogeys, Yatawara’s round included five birdies, 10 pars and one bogey. Her other birdies were on No. 11 and No. 15.
“I had chances for more birdies, but the pin placements were tough,” Yatawara said. There were a lot of sharp-breaking putts and side-hill putts, and I left some short.”
While Salisbury’s string of CCC titles ended, Yatawara’s senior teammates Shelby Holden (95) and Caroline Parrott (98) made all-conference.
Next for Yatawara and the Hornets is Monday’s 1A/2A Central Regional at Cross Creek Country Club in Mount Airy. That’s where they’ll try to qualify for another trip to the state championships. The Hornets have won the last four state titles.

SALISBURY — Monday’s loss was a tough one for Salisbury’s volleyball team. All three sets were deadlocked late, but East... read more