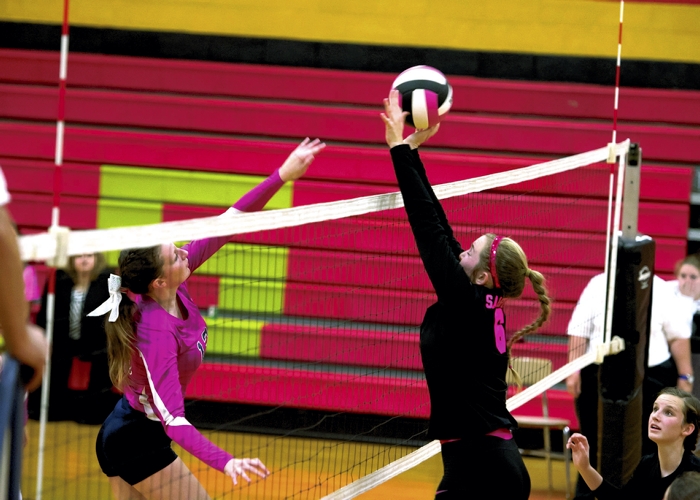 SALISBURY — Monday’s loss was a tough one for Salisbury’s volleyball team.
All three sets were deadlocked late, but East Rowan was better — and luckier — under pressure. The Mustangs swept the Hornets 25-23, 26-24 and 25-23.
“We get up and then we get down,” said Salisbury senior setter Lora Withers, who had 14 assists and seven digs. “We put up a good fight today, but we’ve got to finish better.”
SHS coach Mallory Hodge wasn’t upset.
In the big picture, it was a good day. Her team’s pink numerals and headbands and East’s pink jerseys were a reminder that it was the annual Dig Pink Day to raise money for breast cancer research.
Between games, players and Hodge presented pink roses to breast cancer survivors in the bleachers.
Ten girls, including Mustangs and Hornets, donated hair to Pantene Beautiful Lengths to make wigs for cancer patients.
Both of Hodge’s grandmothers survived battles with breast cancer, so she’s as passionate about fighting the disease as she is about coaching volleyball.
“East is always willing to play us in this game every year, and this was the best turnout we’ve ever had,” Hodge said. “We raised a lot of money. That was more important than the outcome of the match.”
There’s no doubt about that, but it was still one of the most exciting matches of the year. Salisbury’s junior middle hitter Juliana Anderson (15 kills, five blocks) is one of the best players around, and there were times when the Mustangs (12-7) couldn’t stop her. East won because it has three exceptional players in senior outside hitters Brittany Small and Avery Wright and junior setter Jordan McCall.
“Salisbury picked up a lot of balls today (Abby Lee and Rebecca Malloy combined for 22 digs) that our hitters usually put down,” East coach Sandy Basinger said. “I thought we were up and down all day, but we did play well at the end of every set. It was like we put on a different hat whenever the score got to 20-20. If we could just find a way to bottle that, we’d be a really good team.”
Salisbury (8-14) led 11-7 in the first set. East caught up and took a 23-20 lead, only to see the Hornets stage their own rally. A kill by Jane Miller helped the Hornets pull into a 23-all tie, and Basinger called timeout.
After that timeout, McCall won the next critical point with a smart play. Then McCall assisted on a rocket of a kill by Small that gave the Mustangs the set.
From a Salisbury perspective, the second set hurt the worst. Anderson was dominant and pushed her team to a 23-17 lead.
Wright led an East charge that pulled the Mustangs within 24-20, and then a kill attempt by Anderson was wide left by inches.
Then Wright made an extraordinary dig with her left forearm on what appeared to be a certain set-ending kill for Anderson, who had hammered the ball crosscourt.
“Juliana is a game-changer,” Wright said. “Sometimes when she hits, there’s nothing you can do but throw your arm up. It just worked out for us.”
When Anderson was just wide again, it was 24-all.
Another strong play by Wright after a dig by Baleigh Hill put the Mustangs ahead 25-24, and they scored their sixth straight point to win the set when Anderson hit long — again by inches.
“We didn’t play our best today,” McCall said. “But we had some good timeouts, talked about what we needed to do, and we got it going on the big points.”
McCall was more of a factor than usual as a hitter and continued in that role in a tight third set.
“Sometimes when the team is down and needs a big point, I’ll try to get them back up with a kill,” McCall said.
East pushed to a 9-5 lead with back-to-back aces by McCall, but a service run by Makayla Dillon brought Salisbury back even at 13-all.
Wright served consecutive aces for a 17-16 East lead, and the teams see-sawed from there.
Basinger called timeout with Salisbury leading 23-22.
After the Mustangs tied it on a hitting error by the Hornets. McCall put the Mustangs on top. Then, on match point, McCall made a perfect set for Small on the right side.
East also beat Salisbury 26-28, 26-24, 25-20 and 25-23 on Aug. 19, although both teams have improved quite a bit since then.
“They always seem to squeak out those last points against us,” Hodge said. “We played very hard today, but I won’t be happy until we can start finishing.”
Both teams return to league action today. East is at Central Cabarrus in the SPC. Salisbury has a huge CCC match at West Davidson. The Hornets are in second place, one game behind the Green Dragons.