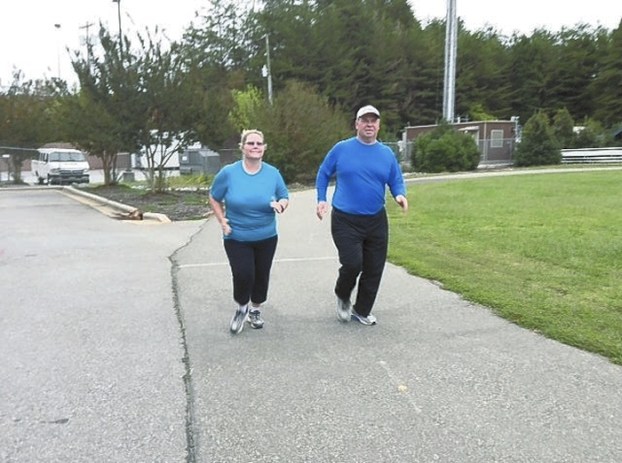 Submitted photo Brent Parks and Norma Honeycutt during a workout.

David Freeze: Keeping Up With Brent, Norma and Kristy

This is part of a series of columns following Brent Parks, Norma Honeycutt and — more recently — Kristy Bell as they work to improve their health and fitness in 2015.

As September ended, my three clients were taking different directions in their pursuit of lesser weight, better health and a brighter future. Brent Parks and Norma Honeycutt have now been at it for nine months and have made progress during that time. Kristy Bell is approaching two months into her own program.

There is much to tell about Kristy. When she began her program, Kristy had not walked unsupported for two years. She knew very little about caloric limits and didn’t have any workout plans. Fast forward to today and all that has changed. Kristy has specific caloric goals and is meeting them daily with the help of myfitnesspal.com. Currently, she is on a limit of 1,500 calories a day and doing very well with it. She has been walking at a level of about 1,600 steps a day.

Val Velte, Novant Health corporate and community wellness nurse, continues to be my partner when working with Brent, Norma and Kristy. She recently spent an hour with Kristy addressing food labels. Val explained to Kristy how to measure the size of a food serving and how to prepare the proper amount.

They talked about how to understand the specifics of the food label, especially the amount of servings contained, calories, and the differences in types of fat on the label. Val also told Kristy how to shop for better products in the grocery store while paying attention to the ingredient list. They look forward to making a trip together to a grocery store in the near future.

Kristy and Val talked about the thinner Kristy. Kristy said, “Right now, she’s hiding good, but I want to meet the thinner me.”

Kristy has a lot of short-term goals, including building up the stamina to walk through a grocery store. Val said, “Whenever you are ready, we will all meet in the grocery store where we can practice reading labels.” She did this with Brent and Norma early in their program.

“Right away, they took me under their wings,” Kristy said. “I had three mother hens and a rooster who were looking out for me.” As her balance improves, Kristy will also take water aerobics classes.

Norma’s weight loss has slowed, but her ability to work out at a higher level is intact. She has recently been running 2-3 miles occasionally at just over 14 minutes a mile and also has run the Catawba College stadium steps at least once a week. Norma works out at some level nearly every day.

Brent has had mixed results. Twice now he has run/walked a sub-40-minute 5K on the track and is contemplating entering an upcoming road race. He has raised his exercise heart rate during these workouts to a higher level. On the flip side, his other workouts and calorie monitoring have been inconsistent.

Year to date weight loss for each of them includes more mixed results. Kristy is off to a very fast start with 34 pounds lost in just less than two months. She had much more to lose and realizes that this pace will not continue. Norma is down 36 pounds for the 9 months so far. Brent is down 24 pounds during the same time period.

I asked each of them to provide goals for October and for the three months remaining for 2015. Kristy responded first with realistic goals. For October, she wants to improve her steps per day to 2,500 and be able to take the aerobics class without taking a break. For the rest of the year, she wants to be able to retire the wheelchair as a walking aid and be able to drive again. When both of these happen, Kristy said, “I will regain my independence.”

Brent still wants to improve his weight loss by the end of the year. His results have been up and down since May. Brent has committed to exercising six days a week for October, something that he has not done in a while. Brent plans on reducing his caloric intake. His cardiovascular fitness has improved quite a bit for the year so far. Brent needs more high intensity exercise several times a week and a better variety, often with a longer duration.

Norma wants to pursue her January 2015 weight loss goal of 52 pounds. She realizes that it will take a commitment at a higher level than she made during the last few months. Norma needs to lose slightly more than a pound a week for the rest of the year, realizing that she must average a calorie deficit of about 4,000 calories per week. A pound has 3,500 calories. Norma is going to add more servings of fresh fruit and vegetables to her diet even though she says, “I don’t like them.”

“I want to make my fitness a lifelong process. After this year, I want to keep it going and get better,” said Norma. The seeds have been planted, the information made available. Now it is time for the motivation to come from within.

I’ll be back with another report at the end of October. I expect good things, but then, I always do. Once again, encourage Brent, Norma and Kristy when you see them around. They will appreciate it.

David Freeze lives in Rowan County and is president of Salisbury-Rowan Runners.

Spencer Board of Aldermen to discuss search for new town manager

The search for a new town manager for Spencer may soon be under way. The Spencer Board of Aldermen will... read more