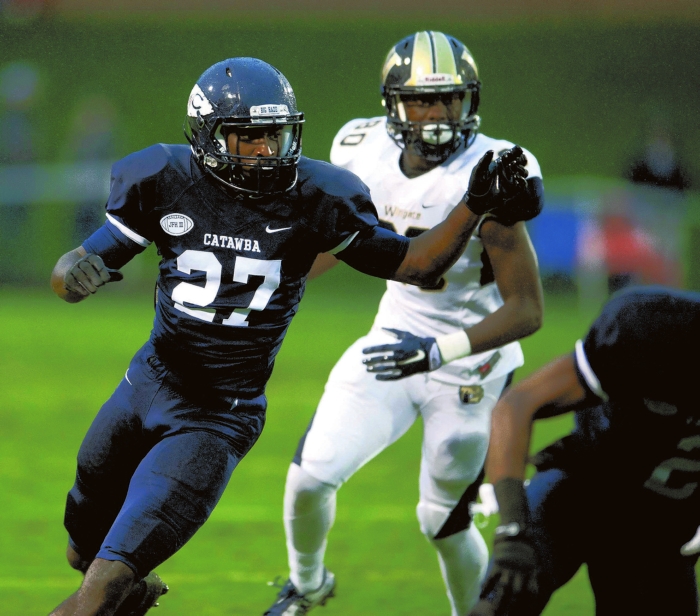 GAFFNEY, S.C. — Catawba head coach Curtis Walker isn’t a believer in handing out game balls because football is the ultimate team game, and it’s a rare night when one individual decides a contest.

Walker broke with tradition on Saturday, however. Senior defensive back Mark McDaniel, a South Rowan graduate, was awarded the game ball after intercepting three passes in a muddy 10-3 win over Limestone at Gaffney High School.
“The first game ball I’ve given out in my three years as head coach, but it’s well-deserved,” Walker said. “Mark won this one for us.”
McDaniel was the first Catawba player to intercept three passes in a single game since Nolan Peterson accomplished the feat against Carson-Newman in 1996.
McDaniel didn’t just intercept passes, he returned them with authority. His 143 yards in interception returns made him the most dangerous player on the field in a bad-weather game in which Catawba’s offense struggled mightily.
McDaniel’s first interception at the Catawba 8-yard line and his 48-yard return provided a short field, and the Indians pushed 44 yards early in the second quarter for their only touchdown. Cary Littlejohn scored on a run from 18 yards out.
McDaniel’s interception late in the second quarter led to a 32-yard Chad Hollandsworth field goal and a 10-0 halftime lead.
“Both those interceptions Mark had in the first half were on old-fashioned tip drills,” Walker said.
Catawba (4-2) couldn’t put the game away because its offense wasn’t going anywhere. The Indians threw only six times, completing two for 12 yards. QB Mike Sheehan netted 92 yards on the ground, but Catawba backs Littlejohn, Eamon Smart and David Burgess were held to a combined 29 yards.
Catawba made only eight first downs.
“The field was worse than what we played on against Newberry last week,” Walker said. “There was standing water in a lot of places even before the game started. And Limestone had a good game plan. They loaded up the box to stop the run and they shut our offense down.”
Limestone linebacker Logan Stoodley (West Rowan) had four tackles, two for loss.
With the offense bogged down, Catawba’s defense dug in one more time. Inside linebackers Michael Peppers and Trey Evans made 11 and nine tackles, respectively. End C.J. Barksdale made 10 stops. Safety Chris Carpenter had an interception.
Limestone (1-4) got a field goal in the third quarter to make it 10-3.
The Saints began on their 20-yard line after a Hollandsworth punt and started their last desperate drive with 3:37 left in the game.
The Saints converted a fourth-and-4 at the Catawba 45-yard line with a diving reception at the Indians’ 27 by Deondre Baskett.
Peppers and Carpenter stopped a first-down running play for a short gain, and after an incompletion and a fumbled snap it was fourth-and-10 with 1:29 remaining.
That’s when McDaniel intercepted a Matthew Harkness pass at the Catawba 1-yard line and took off.
“He went up and picked that ball off at its highest point,” Walker said.
Walker screamed for McDaniel to get down to avoid risking a fumble, but McDaniel couldn’t hear him and he was picking up blocks. He nearly scored. He swerved and sprinted 84 yards before finally being tackled at the Limestone 15.
After three kneel-downs, it was over, and the Indians had survived a challenging non-conference game against a third-year program that is in only its second season of on-the-field competition.
“Limestone played well, and we’re appreciative of our defensive effort and appreciative of a victory that keeps us in position to accomplish our goals,” Walker said.
Catawba is home against Mars Hill, a surprise winner over Newberry, next Saturday.
“We’ve got a lot of things to work on this week and a lot of questions to answer,” Walker said. “But we’ll keep moving forward.”