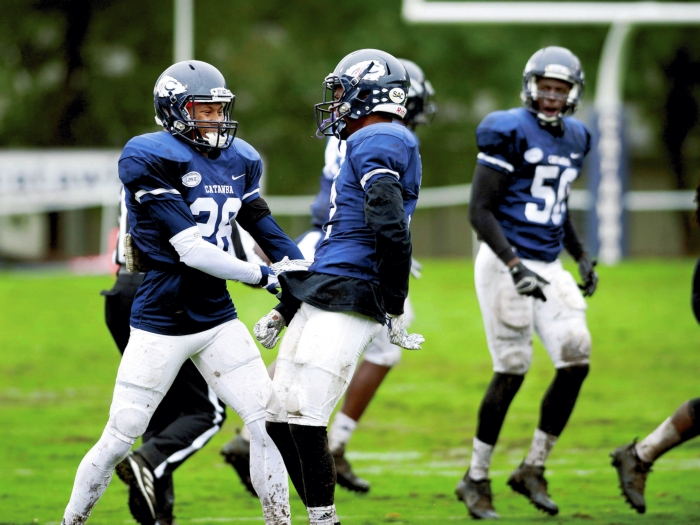 SALISBURY — Catawba free safety Jeremy Addison is a true freshman who’s already reminding head coach Curtis Walker of a fellow named Keith Henry.
Henry, now Catawba’s defensive coordinator, would be the free safety if Catawba named an all-time team. He was a three-time All-America — honorable mention in 1986, second team in 1987, first team in 1988. Henry made 398 career tackles and shares the school record with 20 interceptions.
“I’ve seen a lot of safeties,” Walker said. “This kid is the closest thing I’ve seen to Keith Henry. He’s having a strong freshman year. He’s just got to keep building on it.”
Addison, needless to say, is flattered by such talk.
“That’s good to hear because Coach Henry was an All-American,” Addison said. “That’s something everyone wants to be.”
While Addison (6-0, 175) doesn’t possess unusual size, he has good speed (4.6) and many positive intangibles that aren’t measurable.
“He’s a great competitor who doesn’t like to lose,” said Catawba receiver/kick returner Brandon Brown. “He has good feet and he has great recovery speed.”
Addison’s biggest asset is that he arrived at Catawba with unusual experience for a freshman.
Addison played in high school for the Dutch Fork Silver Foxes in Irmo, S.C., and Dutch Fork played in state championship games three straight years. Addison was a standout as a junior at the 2,400-student school when the Silver Foxes beat Sumter for the state title. When he was a senior, Dutch Fork lost to Hillcrest in the title game.
Addison played for prep coaching legend Tom Knotts, who is closing on 350 career coaching wins. Knotts won a North Carolina 4A state title at West Charlotte in 1995. Later, he reeled off six straight state championships at Charlotte Independence from 2000-06.
“Dutch Fork was 2-9 the year before he came and 9-2 his first year, so Coach Knotts turned things around immediately,” Addison said. “His system was really hard to learn, but playing in a system like that in high school is a reason I came here on top of some things.”
There were quite a few college that showed interest after Addison’s interception-filled high school career.
Catawba assistant Corey Ready and former assistant Chris Collins did most of the leg work as far as recruiting Addison, although Catawba’s facilities closed the deal.
“When I visited, I liked the stadium, the field house and the campus,” Addison said. “It’s not that far from home (less than three hours), and Catawba’s coaches showed me more love than anyone else did.”
Addison is humble. He says he was surprised he was entrusted with a starting assignment right out of the gate because there were experienced players at his position, but he’s making the most of his opportunity.
He’s been especially good in the three games Catawba (3-2) has won. He had four tackles, a sack and a fumble recovery against Davidson. He was credited with eight tackles against Carson-Newman and six in Saturday’s 17-13 win against Newberry.
“I’m just trying to work hard and to play well enough to keep a position,” said Addison, who considers his run-stopping effort at Carson-Newman to be his best work so far.
He’s shown enough already that Walker didn’t shy away from mentioning him in the same sentence as one of Catawba’s all-time best.
“From his first day, Addison has played with maturity,” Walker said. “He’s a young guy who plays like an old guy.”