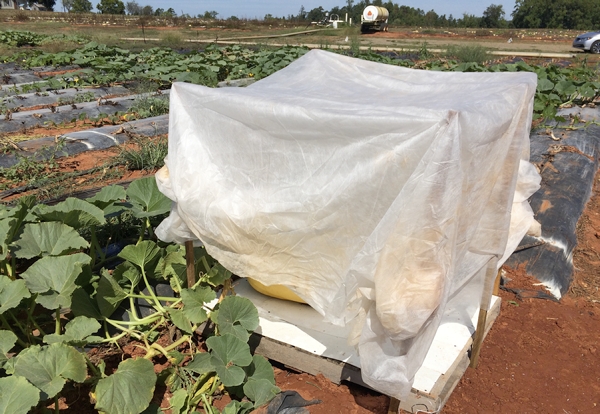 Cooperative Extension A plastic tent protects a pumpkin being grown for a contest.

What do a tent, plastic covered pallet and pumpkin vine make? I guess I should say help make, but these are all required to make a giant pumpkin.

Growing pumpkins in our hot and humid environment can be very difficult with disease and pest pressure. With all of that stacked against the growers, it is hard work to get a giant pumpkin, even though there are numerous competitions across the nation. The world’s largest pumpkin was over 2,000 pounds.

Just recently, I was able to stop by the Piedmont Research Station to take a look at a few of the trials. What I saw was interesting to say the least. As I was driving by one of the fields, I saw a small tent. I knew exactly what they were doing. But, to the untrained eye, a motorist might wonder what on earth the research station was doing out there.

I quickly pulled into the station and discovered that they were in a heated competition with the Upper Mountain Research Station to see who could grow the largest pumpkin. The odds are stacked against our local station but with their expertise, they may have a fighting chance.

When growing giant pumpkins, a lot has to be in place. You must first select the perfect pumpkin. Then, you have to care for it as if it was your own child. The pumpkin needs to be off the ground to reduce rotting and to provide stable support.

As we continued discussing the giant trials, I asked them to enter into the county fair. I am hoping we will have a few samples from them to showcase next week. It would also be nice to have our Research Station get the bragging rights to growing the largest pumpkin.

If you would like to enter something into the fair, today is the last day. If you would like more information on fairs, growing giant pumpkins, or gardening in general, please call your local agent, Danelle Cutting, at 704-216-8970.

For more information on fair entries or the fair in general, please visit this website: http://rowancountyfair.net/