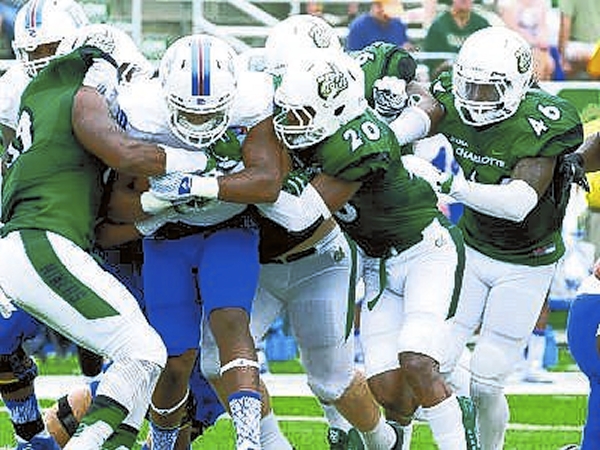 CHARLOTTE — A beautiful day for football at Jerry Richardson Stadium turned out to be even nicer for Najee Tucker, a strong safety for the Charlotte 49ers.

Tucker, a former West Rowan Falcon, is a strong safety for the third-year program, listed as the backup to outstanding senior Branden Dozier.

With the 49ers jumping all over Presbyterian in their home opener last Saturday, Tucker saw plenty of action in the second half from his safety position. He also plays on special teams and was active there in the first half as well.

Charlotte won the game, 34-10, and Tucker had a team-high four solo tackles, to go along with one assist. It was just his second career game, after red-shirting in 2014.

The 49ers opened the season on Sept. 4 in Atlanta’s Georgia Dome, and defeated Georgia State, 23-20.

“That was a great experience for my first college football game, in the Georgia Dome and on ESPNU,” said Tucker on Saturday. “My mom (Charonda Perry) got to go down to Atlanta and of course, she’s at home games.”

The Georgia State game was Charlotte’s first at the Football Bowl Series (FBS) level, after two years in Football Championship Series (FCS). The football team has joined the rest of the school’s sports in Conference USA and will battle teams like Southern Mississippi, Marshall, Rice and Florida Atlantic this season.

“Today was fun, playing a good amount of snaps in the second half,” said Tucker. “I just tried to take advantage of the opportunities that I had.”

On the punt return team, Tucker was seen moving into the line and keeping an eye on the punter.

“I have to make sure the punter does punt the ball and sometimes, I try to get a hand on it and block it,” added Tucker, who laughed when asked about returning punts.

“Those were fun years in high school, but I missed out on winning a state championship,” said Tucker.

One of his teammates is Kalif Phillips, the starting running back who hails from A.L. Brown High School. Phillips is a junior and has already had an outstanding career for the 49ers.

Phillips entered the 2015 season with 2,152 rushing yards and he will forever be the school’s first 1,000-yard rusher in a season.

“I feel like the “old man” around here now,” smiled Phillips after Saturday’s win. “A lot of younger guys are looking up to me and looking for me to make plays, sort of like it was in high school.”

Phillips signed with Charlotte in February 2013, a member of the program’s second recruiting class. He had been heavily recruited after a 328-yard, seven-touchdown performance against Hickory Ridge in the 2012 state playoffs. Phillips stayed loyal to Charlotte, however.

“Several schools recruited me but this was the offer that I was looking for,” said Phillips. “It was history, starting a major program and and all, so it was hard to pass up history.”

Phillips had 90 yards rushing in the opener at Georgia State, but just 53 against Presbyterian. With the victory over the Blue Hose in hand early, Phillips rested and only carried eight times.

When Phillips scored on a smooth 12-yard run in the second quarter against Presbyterian, it was his 34th career touchdown. All but one of those scores have been on the ground.

Phillips is excited about Charlotte’s move to FBS.

“Playing all Division I teams is a blessing,” he said. “It feels great that we are up there with the other D-I programs.”