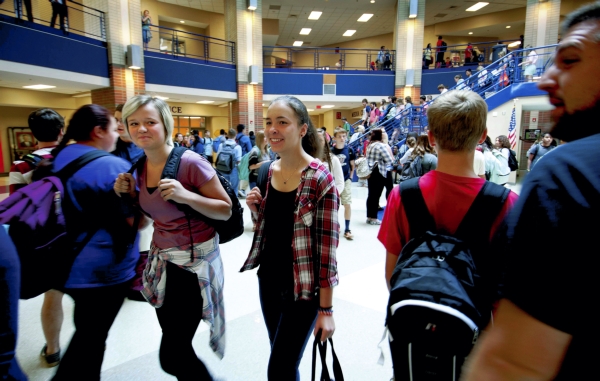 The first day at a new school can be exciting and nerve-wracking for any high school student. Franziska “Franzi” Botur, a 16-year-old from Berlin, Germany, is no exception. Botur will be studying at Carson High School this year as an exchange student.

She’s staying with the Suggs family — Wendy and Allan and their daughter, Elora — in China Grove. Elora, 14, is also attending Carson this year as a freshman.

Suggs said having an exchange student was her dad’s idea.

“My dad had a foreign exchange student when he was young,” she said, adding that he wanted her to have the same experience.

“I was definitely into it,” she said.

The family signed up through Ayusa, a nonprofit organization that matches exchange students with host families.

Suggs said her family was interviewed and their house was inspected before they were approved to be a host family.

Botur said she found out about Ayusa through a friend who is studying abroad in Texas this year.

“I always wanted to go to America,” she said.

Botur also went through an interview process, where she shared about herself and the things she wanted in an exchange family.

She arrived in North Carolina the Saturday before school started, after a three-day trip to New York City with other Ayusa study abroad students.

She said she was especially excited about participating in school sports and that she hopes to join the volleyball team. In Germany, she said, there aren’t sports teams in the schools.

Botur said there are a number of differences between life in Germany and China Grove.

Botur lives in the eastern part of Berlin, in what she described as the outskirts of town. There are public transportation options, and families tend to live in apartments.

“We don’t have the big houses,” she said.

Botur added that Carson High School is bigger than her high school in Germany and that they don’t use laptops in their classes.

School lunches, she said, are better than those at home.

“I think it tastes better than in Germany. School lunch in Germany is terrible,” Botur said.

But some things about high school don’t change between North Carolina and Germany.

Botur said the classes are similar and that groups of friends interact in the same ways.

This semester, she’ll be taking American History, science, math and English. Next semester she’s taking French, which she’s been studying for several years.

One of Ayusa’s requirements for students is that they be fluent in English. Botur has taken 10 years of English classes and has very strong English skills.

“We learn it very early,” she said.

Botur said she thinks she will miss her family and friends in Germany, but also said she’s excited for the school year.

She said her host family is very funny.

“We have a very humorous family,” Suggs said.

She said she’s also looking forward to spending a year with Botur so she can learn German words, eat German food and have someone else living at home.

Botur hasn’t decided what she’s going to prepare, but she has promised to cook dinner sometime for the Suggs family.