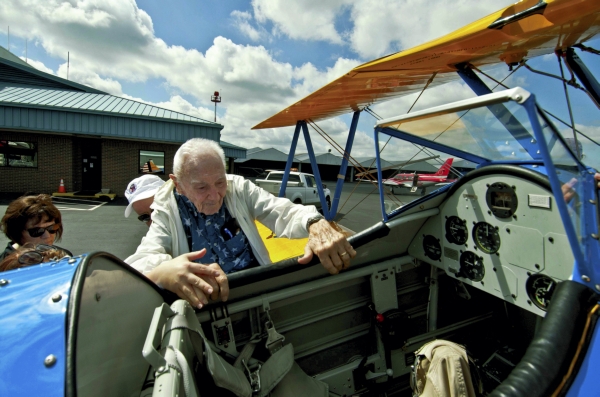 Ninety-two-year-old Dr. Clyde Young gets help climbing into the cockpit of a a 1940 PT-17 Boeing Stearman biplane the Ageless Aviation Dreams Foundation brought to the Rowan County airport. It’s the third year the foundation has come to Rowan to take military veterans on flights. Jon C. Lakey/Salisbury Post Pilot Darryl Fisher, of Carson City, Nevada, tends to the engine before starting up and taking off with 95-year-old John Fisher. Jon C. Lakey/Salisbury Post

Darryl Fisher built a career working in the long-term care industry, and he is still involved. But one day, as Fisher and his dad ferried a Stearman biplane home, they stopped to give a few rides to veterans. Darryl’s wife Carol said, “We’ve got to keep doing this!” and a new mission was born.

Fisher’s family includes a grandfather, grandmother, dad and uncles who are pilots, so it was natural for him to continue the tradition. His first flight was on the family farm in Washington. Now a commercial pilot, Fisher has combined his love for the elderly and flying with Ageless Aviation Dreams Foundation.  On Monday, veterans from Oak Park Retirement got their chance to fly with Fisher for the third year in a row at the Rowan County Airport. All flights were on a 1940 PT-17 Boeing Stearman biplane.

Ageless Aviation Dreams is a nonprofit funded by sponsors, so the flights for veterans are free. Fisher credits SportClips and Matrixcare primary sponsors. “Along with them,” he said, “all of our other sponsors provide support so that we can give back to these veterans who fought for our freedoms.”

The first flyer of the day was also the oldest. Vic Reid, 99, was among several World War ll veterans on hand. Reid spent three years in Panama before being transferred to New Guinea and the Philippines. Reid’s Army unit was responsible for hunting down the last remaining Japanese soldiers.

“There were bullets all around us, but I never got hit,” he said. “If the Japanese ran back into the caves and we couldn’t get them out, then we just covered the cave with dirt from a bulldozer.”

Reid, one of five brothers who fought in the war, was on hand when General McArthur returned to the Philippines. Reid and his wife Ruby have been married 69 years and have been at Oak Park Retirement for three weeks.

The only pilot in the group of veterans was Wilbur Boltz. Though he never got a chance to fly in the military, Boltz worked for a flying service as a teenager, painting and recovering tails and bodies of the planes. Because he got a discount on flying lessons, Boltz learned to fly and eventually owned several planes. Serving in WWll on the Navy Destroyer USS Johnson, Boltz was discharged in 1949.

“There were no pilot’s jobs available when I got out,” he said. “All of the military pilots had taken them.”

Of his flight Monday, Boltz said, “I got an overview of the whole city. It was a terrific remembrance of flying. When I was young, the skies were free.”

When Fisher learned Boltz was a former pilot, he said, “Now, don’t tell me where I screwed up. Keep an eye on me in the mirror, and if for some reason I’m not there, you’re the pilot.” Boltz said later, “I didn’t fly it. The plane was in better hands with Fisher.”

Known for his singing and trumpet playing, Dr. Clyde Young didn’t take his horn along but did sing a few bars of “A Wonderful World” before he took off. Young said later, “The flight was exquisite. I was real lucky to get to do it, a unique pleasure. I want to go again, Charlotte or Greensboro next time.

When Young, who is 92 and served as a Navy dentist, returned to his walker, he said, “I didn’t need this up there at all.”

Planes are nothing new to Harvey Dezern, a Korean War veteran and Green Beret who served 21 years in the Army. He said, “I have been in lots of planes and made 157 jumps. It was nice to just get to ride around today. ”

SportsClips had a ground crew on hand all day to help Fisher get the veterans in and out of the planes. Area Manager Susan Harris said, “It was very moving to experience this. It is just a small way to help our veterans and give them some joy.”

Kim Hargett and Candace Bowers also were part of the team with Hargett returning for her second year.

Also working on the ground on Monday was Nicole Fisher, Darryl’s daughter, who was flying with her dad for several days. The flying bug hasn’t bit her yet, she said, “but I do love traveling with him and getting to meet the veterans.”

Maybe Wilbur Boltz said it best: “You just can’t get that feeling any more in today’s planes.”