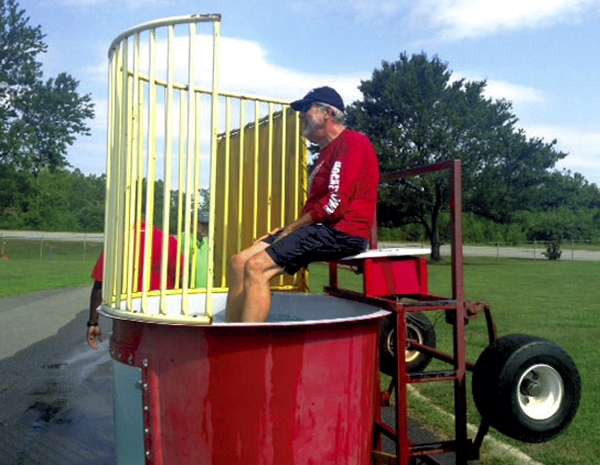 Corporate President and CEO Kip Smith gets to visit the Salisbury Plant of Norandal about two to three times a year. He was here on Thursday to encourage participation in the company’s United Way Kick Off. Smith took two long turns in the dunking booth while employees used their softball skills and enjoyed hamburgers and hot dogs during the late morning festivities. Smith said, “Let it fly. Let’s see what you got!” as he encouraged employees to see if they could dunk him. And they did, often, prompting smiles all around, none bigger than Smith’s. He said, “There’s no professional courtesy among dunkees!”

About 135 employees work at the Salisbury plant. Plant Manager Jason Joyner, another dunkee, came to Salisbury from Huntington, Tennessee, after starting with the company as a temporary employee 13 years ago. Joyner said, “We love Salisbury. Norandal is a special place to work. I am thankful to have a CEO who is so active in the community. One of Norandal’s core principals is community involvement. The United Way helped our employees with mortgages and rents when we struggled through a hard stretch several years back.”

Norandal has seven plants, including a bauxite mine in Jamaica and the corporate office in Franklin, Tennessee and now employs 2,400 workers. A soaking wet Smith said, “The United Way is an extraordinary way to give back to the community. To build a sustainable business for the long haul, we have to take care of our employees, co-workers, communities, shareholders and suppliers. The United Way is a very efficient and effective way to reach the need in the community, helping those that need help the most.”

Smith went on to describe how he was a beneficiary of United Way funds as a youngster. He said, “My family was not well off, but we had the community center in town to go to. It was a constructive place to go and play games and learn to get along with others. It was a source of so many wonderful memories.”

Robbie Nichelson has been with Norandal for 28 years, 27 of that as a slitter operator and now an operations supervisor. He said, “I give to the United Way every year. I designate my gift to the Rescue Squad. You never know when we will need them or any of the other United Way agencies. I just believe in giving. There have been lots of changes here at Norandal and things have come together really well.”

The United Steel Workers Union 8573 donated all of the cookout supplies. Plant employees donated money to the United Way for the lunch of hot dogs and hamburgers and for the softball throws.

Jackie Harris, Resource Development and Marketing Director of the United Way of Rowan County said, “We appreciate the support that Norandal gives to our United Way. Having Kip at their Salisbury plant for the kickoff was really special. Norandal employees and their management team are very generous and for that we are most grateful.”

As a finale for the softball throw donation to the United Way, Smith challenged all the employees on hand to throw two free balls and the first one to hit the bullseye and dunk him again would win $1,000 for the UW campaign. Everyone was asked to throw from behind the cookout tables, about twice the distance as before. All the men took their turns, some of them twice, and had no success. Christy Tolliver, who had spent much of her time retrieving wild throws, calmly stepped up and fired a strike to dump Smith. Tolliver, who attended college on a four-year softball scholarship, said, “Sometimes, it just takes a woman to get the job done!”