Woman with rare cancer: ‘It feels a lot like living with a time bomb inside’ 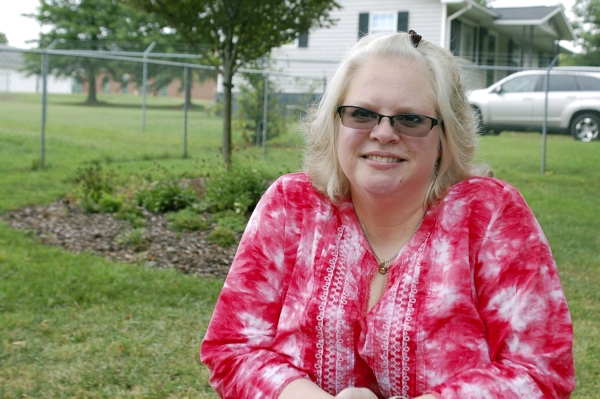 Mark Wineka/Salisbury Post With her rare form of cancer, Brandy Strickland says sometimes she feels as though she lives from scan to scan.

SALISBURY — Toward the end of 2011, a lesion appeared on one of Brandy Strickland’s cheeks. When it was obvious it wasn’t just a blemish, Strickland went to her physician, and the lesion — thought to be a harmless carcinoma — was frozen and removed.

The mark on her cheek eventually came back, but Strickland waved it off and kept going about her busy life. She felt fine, though she became worried in January 2013 when a similar lesion appeared on the other cheek.

Several tests and doctor visits later, Strickland saw her life change forever May 26, 2013, when she learned she had a rare, almost-impossible-to-pronounce cancer called epithelioid hemangioendothelioma, or EHE, for short.

“Rare” doesn’t adequately describe the disease Strickland is living with. She has become an encyclopedia of knowledge about EHE and probably knows more about it than many oncologists, a large percentage of whom have never seen it in a patient.

She knows of only one doctor in the world dedicated to its research — Dr. Brian Rubin, a pathologist at the Cleveland Clinic in Ohio.

“I have heard numbers as low as only 100 a year diagnosed world-wide,” Strickland says, “and as many as 200 to 300 a year in the U.S. Either way, if you try to calculate the percentage, you run out of zeroes on the calculator.”

EHE has presented itself in Strickland’s liver, lungs, and, unusual for the disease, in her brain. She has received radiation and chemotherapy since her diagnosis, which initially hit her like a freight train because her oncologist told her she had a Stage 4 cancer.

All kinds of thoughts raced through her mind. How would she work? Should she update her will?

“I was rather overwhelmed with it,” Strickland says. “It was pretty terrifying. There was a lot of fear, for sure.”

Except for the side effects she has experienced from her treatments, however, the 45-year-old Strickland says her life with the cancer has been pretty much symptom-free. There are two phenotypes associated with EHE, and she has the one that is slow-growing, or “indolent.”

At any time, her EHE could change to the second phenotype, or the aggressive EHE, whose growth is rapid and usually lethal.

“It feels a lot like living with a time bomb inside,” Strickland says. “… You really kind of live from scan to scan.”

A West Rowan High and Appalachian State University graduate, Strickland works full-time as a senior accountant for Lutheran Carolinas Services. She and her husband, Zach, have a 9-year-old daughter Kari, a rising fourth-grader already involved in competition cheerleading.

When the second lesion appeared on her face,  a dermatologist performed a punch biopsy. Strickland says she never heard what the pathologist thought it was, but the dermatologist was concerned, saying it didn’t fit with what he was seeing on her skin.

EHE doesn’t usually present itself on the skin. It looks for highly vascular places in the body such as the liver and lungs. By the spring of 2013, a dermatologist told Strickland she needed to see an oncologist.

Best friends, one of whom is a oncologist, directed Brandy and Zach Strickland to Dr. Michael Livingston, a sarcoma specialist at the Levine Cancer Institute in Charlotte. EHE is a subset of angiosarcoma, which is a subset of sarcoma, a disease affecting only 1 percent of the population.

Livingston already had a patient with EHE, and Strickland says she was only the second case he had ever come across. Livingston ordered up tests and scans, leading to that fateful May 26, 2013, date when Brandy learned EHE was in her lungs, liver, brain and skin. She had two pretty large spots on her liver that were about 5 centimeters each.

Because no serious funding has gone into EHE research, and the trials done for more common diseases were non-existent for it, the treatment protocol for EHE patients has had to rely on published papers to provide a road map. Strickland says her oncologist was “not exactly shooting in the dark.”

At first, Strickland didn’t want to know about her disease. On his own, her husband read a lot about EHE and researched it on the Internet, but he kept what he was finding out to himself.

She underwent radiation in June 2013 for the brain lesions, then chemotherapy in July 2013 for the spots on her lungs and liver. With the chemotherapy, she suffered severe digestive problems and lost 20 pounds. She couldn’t sleep unless she created a bench at the foot of her bed and dozed off sitting up.

When a follow-up CT scan revealed a slight growth of the liver lesions, her doctor tried a different chemotherapy regimen for seven months. She lost her hair, and when it came back, it had gone from straight and dark to white and curly.

Strickland says the liver and lung lesions have been quiet or stable since April 2014. A month before, she had received her last intravenous chemotherapy, and she has been on oral medication since.

Her oncologist has identified a new, tiny lesion in her brain, which means she will need more radiation in September. Meanwhile, she’s working 40-hour weeks, though she finds she loses steam toward the end of every day.

Strickland’s attitude toward her nemesis, EHE, changed earlier this year when she discovered a closed Facebook group — a community of people — who are dealing with EHE from all over the world.

Strickland cried when she learned it was out there. Prior to the discovery, she had felt like an outcast, as though she were the only person dealing with EHE.

“I felt like a unicorn, but then I found a herd of unicorns,” Strickland says.

The people in the Facebook group are EHE patients and family members. They talk about treatment options and offer each other emotional support as they go through scans, treatment or “when one of us dies,” Strickland says.

They also discuss raising funds for Rubin, the Cleveland oncologist doing the research on their behalf. Through the group leader, Jane Gutkovic, Rubin connected with the patients, who provide tissue to him whenever someone has, for example, a liver resection or lung surgery.

“Part of me is growing in a lab somewhere,” Strickland says.

She recently had a lesion removed from her scalp, and that tissue was sent to Rubin.

“This is helping him develop a cell line so that he can do mouse research,” Strickland says. “Recently, a member passed away, and she made a generous gift of tissue to him for this purpose. He has told Jane he hopes to have an animal model this fall, and once that happens, things will really get cooking.”

The Facebook crowd has been instrumental in raising more than $100,000 toward Rubin’s research so far, and Strickland says the emphasis now is to mobilize individuals to raise research money.

An ice cream fundraiser she will have from 2-7 p.m. Saturday at West Innes Street Animal Hospital will be used as a “test case,” Strickland says.

Once it’s over, she will write a step-by-step set of instructions on how to pull off one of these small fundraisers and share it with others in her Facebook group.

For her event, Faith Soda Shop is donating the ice cream. Checkered Flag is contributing cones and other supplies. Family and friends are her volunteers.

Strickland thinks these kinds of fundraisers and the people she has met in the Facebook group show the power of grassroots movements — “when a small group of people are mobilized to do something amazing.”

Contact Mark Wineka at 704-797-4263. To make an online donation toward EHE research, go to FightEHE.com.