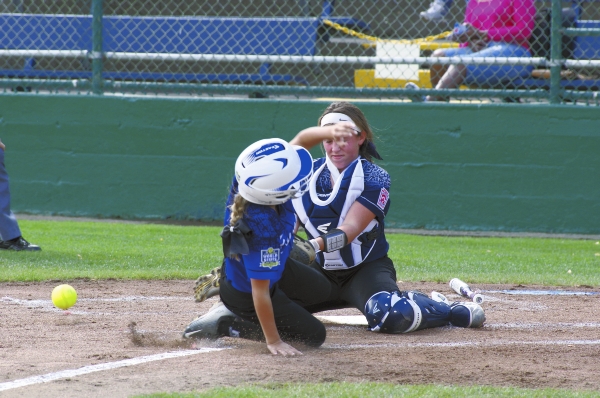 Photo courtesy of Ron Rhodes Jr./LLSBWS Rowan’s Megyn Spicer scored her team’s lone run in the fifth inning, as the ball bounces away from Iowa catcher Skylar Rigby. Spicer scored on a misplayed fly ball to left field off the bat of Taylor Walton. Iowa won, 3-1.

PORTLAND, Ore. — Rowan was held to two hits and lost to Iowa, 3-1, in the Little League Softball World Series here Saturday morning at Alpenrose Stadium.
Iowa, the Central Region champions, stayed undefeated for the season (13-0) and moved to 2-0 in pool play in the World Series for girls, ages 11 and 12. The Iowa girls are from the communities of Huxley, Slater, Polk City, Collins and Maxwell.
It was the first loss of the season for Rowan (13-1), the Southeast Region champs. Rowan fell to 1-1 in pool play and now has to win Sunday (vs. Philippines, 4 p.m. EST) and Monday (vs. West Region champ Washington, 7 p.m. EST) to have a realistic chance to advance from pool play to Tuesday’s televised semifinals (ESPN2).
“It was frustrating because I’ve seen our girls hit all year and we didn’t hit today,” Rowan coach Steve Yang said in a phone interview. “At the same time, you have to give the Iowa girls credit. Their pitcher was very good.”
Iowa pitcher Mikayla Houge pitched a no-hitter against Philippines in Iowa’s 12-0 victory on Friday and she was able to limit Rowan to an unearned run and two hits.
Megyn Spicer and Jaden Vaughn came off the bench to get the base hits for Rowan.
Houge struck out five batters.
Rowan pitcher Kali Morton struck out four and held Iowa to two hits, but she hit two batters and walked three others.
Iowa, the home team, scored in the first inning on a hit batsman and a dropped flyball.
“We just did some things that were uncharacteristic of our team,” Yang said. “Walks, hit batters, errors. It really should still have been 0-0 and going to extra innings.”
Iowa made it 2-0 with trickery in the fourth inning.

A leadoff walk was followed by two groundouts, advancing the runner to third. On a two-out walk, the runner didn’t stop at first and kept going toward second. Rowan got her out in a rundown, but that out came after the runner from third had raced home.
Rowan had its chance to rally in the fifth frame.
Spicer led off with a hit and scored when Taylor Walton’s fly ball to left field was misjudged. The left fielder broke in, as the ball sailed over her head. The official scorer called the play an error but it could have easily been ruled a hit.  Spicer scored and Walton, the potential tying run, made it to third base with no outs.
However, a strikeout and a line drive to the shortstop, for a double play, ended the inning.
Iowa made it 3-1 in the bottom of the fifth inning, scoring with the aid of a walk, a passed ball and an error.
Vaughn led off the sixth and final inning with a hit, but the top of Rowan’s lineup went down 1-2-3 to end the game.
“Their pitcher kept everything on the outside corner and we’re not a team that does a great job of going the other way,” Yang said. “Our big hitters weren’t able to make the adjustment.”
NOTES: The Rowan girls took a bus to the Pacific coast for sightseeing on Saturday evening, and they’ll try to bounce back today at 4 p.m. (Eastern time) against Philippines … Philippines, the Asia-Pacific champ, had been outscored 23-0 in two losses, heading into Saturday’s late game against Canada … Washington, 2-0 in pool play, takes on Iowa in the late game on Sunday. Rowan coaches and players will keep an eye on that outcome.

By Mike London mike.london@salisburypost.com Rowan County football teams took the next step toward the regular season with full-scale scrimmages on... read more