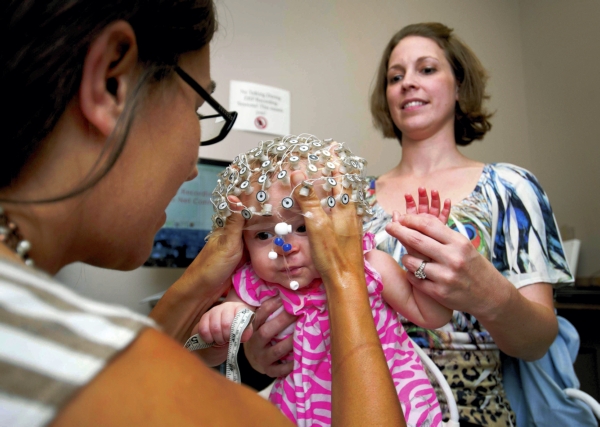 Research Assistant Christa Thomas, left, places a specialized net on the head of 8-month-old Brooklynn Thompson while her mother Stacie holds her Wednesday. The net will read the electrical impulses in the brain painlessly while recording the changes in the brain’s natural electrical activity while the child looks at a series of pictures. The results will help researchers compare cognitive differences in infants fed natural breastmilk and current baby formula with others fed breastmilk and a formula with a new protein added. Researchers are looking for 80 participants to complete the tests. JON C. LAKEY / SALISBURY POST

The University of North Carolina’s Cheatham Nutrition and Cognition Lab this month began recruiting infants as part of an industry-funded study that focuses on how a mixture of feeding methods affects memory. The mixture of feeding methods involved in the study include: only infant formula; breastfeeding with normal formula; and breastfeeding with a protein-infused formula, according Dr. Carol Cheatham, a UNC professor and researcher.

Cheatham’s lab is in the midst of recruiting 14- to 90-day-old infants for the study. Children would stay in the study for one year, with check-ups every two months. The lab is looking for a total of 80 infants at the North Carolina Research Campus and 80 at the Frank Porter Graham Child Development Institute in Chapel Hill.

Cheatham said she believes the protein-infused infant formula will help with cognitive development. Traditionally, she said, breastfeeding is viewed by medical professionals as more nutritious for infants.

“The thinking is every mom should be breast feeding,” she said.

Working moms, however, may not have time to regularly breastfeed infants.

“If the mom is working on the factory line, she can’t take a break every two hours to breastfeed,” Cheatham said.

Infants may not be able to latch onto the mother’s nipple. The mother also may not be able to produce enough milk. As a result, companies who make baby formula have increasingly looked to make products more similar to breast milk, Cheatham said.

The protein included in the formula for Cheatham’s study is intended to improve cognitive development, she said. She couldn’t disclose the name of the company or the protein because of a confidentiality agreement.

Every two months, the infant participants would come in for a check-up as a part of the study.

At six months, memory will be tested with a single picture shown dozens of times. Cheatham said the lab’s staff would determine how well children remember the picture by brain activity, which will be measured with a web of electrodes that fits over the infant’s head like a shower cap.

The web picks up electric pulses emitted by the child’s brain.

If a child doesn’t recognize a picture, Cheatham said, graphs would show a steep, swooping downward slope and a subsequent, upward swing. If the child recognizes the image, the slopes would be less steep.

At 10 to 12 months, staff will show the children how to assemble or play with a toy. Later participants will be asked to do what was shown by staff.

Cheatham stressed that the parents will be able to stay with children throughout the entirety of all check-ups.